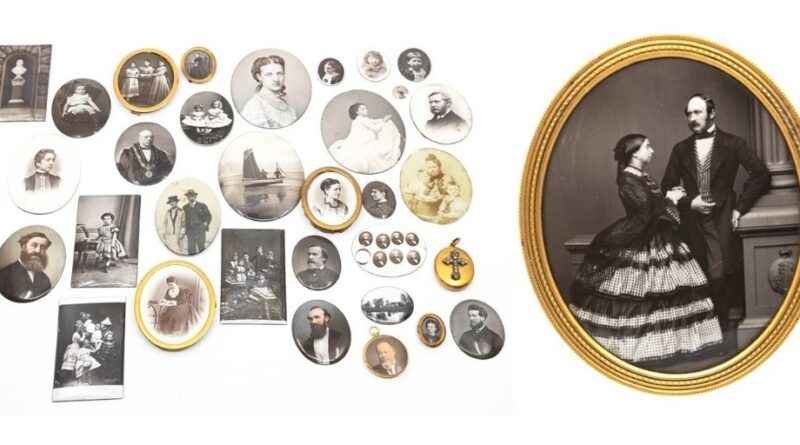 Rare photographic portraits providing an insight into Queen Victoria’s life in the late 1800s could sell for £25,000 at action in October.

Queen Victoria admired the work of Scottish-born Alexander Lamont Henderson and in 1884 awarded the experimental photographer and member of the Royal Photographic Society a Royal Warrant to depict everyday royal life.

The collection, which is due to be sold by Hansons Auctioneers on October 13 with a guide price of £15,000-£25,000, has been tucked away in a cupboard for decades. Following Henderson’s death in 1907, it was inherited by his family and passed down through the generations. It currently belongs to Henderson’s great-great grandson, 63-year-old electrical engineer Roderick Williams from Coltishall, near Norwich, Norfolk.

Mr Williams said: “My great-great grandfather worked as a royal photographer for Queen Victoria up to her death in 1901.  We think he caught her attention thanks to his experimental colour work with glass plate lantern slides and enamels.

“She commissioned several coloured enamel pictures. These included royal portraits and views of the Royal Mausoleum at Frogmore. It’s thought some tiny miniatures were donated for display in Queen Mary’s dolls house at Windsor.

“As well as capturing everyday royal life, he was also responsible for processing royal portraits on to enamel for use in jewellery.

“As well as taking photos of Queen Victoria, he worked with glass plate negatives taken by other photographers but, sadly, much of his work has been lost or destroyed. That’s one of the reasons I have reluctantly decided to sell. Perhaps this archive deserves to be in a museum or royal collection to allow his work to be preserved and enjoyed by future generations.”

Edinburgh-born Henderson (1837-1907) created a stir thanks to his experimental photography, enamel and colour work. His aim was to produce a photographic equivalent to the hand-painted miniatures commonly used in jewellery.

His skills led to him being awarded medals for his work, which is still winning plaudits today. In 2019, ground-breaking images he took in Greece in 1904 were exhibited in Athens. Instead of the usual shots of ancient monuments, he recorded everyday life.

After his death, some of his photographic work was donated to the London Guildhall Museum but, unfortunately, it was destroyed during the Second World War.

Jim Spencer, associate director of Hansons Auctioneers, said: “This is a fascinating collection of unique images that sweep us back around 140 years. They provide an insight into Queen Victoria’s life, the Victorian era and also capture evocative scenes in France.

“His work was ground-breaking in many ways. It’s a great shame much of it was destroyed during the Blitz but this personal collection has survived intact thank to his family.

“Some of Henderson’s enamels can be found in the Royal Collection Trust and London’s V&A museum, and some of his slides were rescued by Mr F C Guilmant, of Southampton, and used in an exhibition at Brighton Polytechnic in 1987. Nevertheless, Henderson’s work is scarce, hence the importance of this archive.”