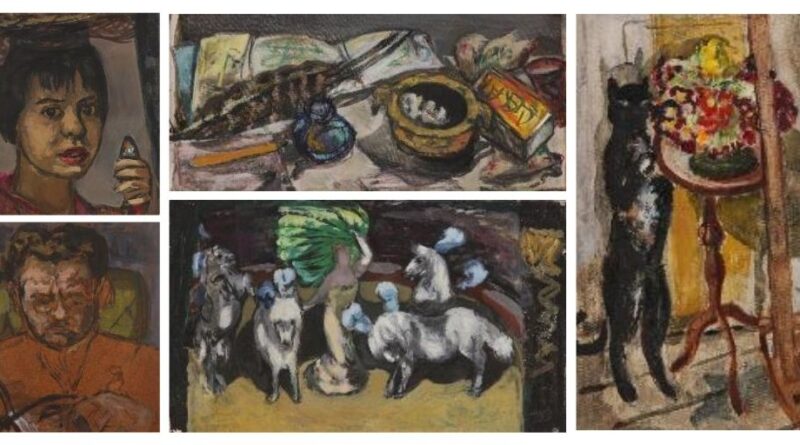 A group of oil paintings by Viennese emigré artist Marie-Louise von Motesiczky (1906-1996) will be presented on the open market for the first time ever at auction. The artist parted with very few works during her lifetime, and it is extremely rare for any of her works to be available for sale. 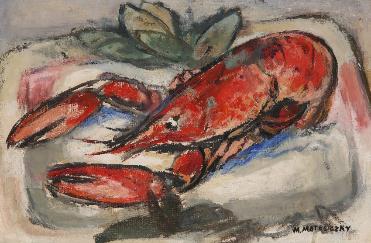 This is the first time a group of her paintings has been available to purchase at auction. Chiswick Auctions in West London has been appointed to sell eight works, all painted after the Second World War when the artist was living in England. They will be offered in a sale of British & European Fine Art on December 4, 2020. They are estimated to fetch in excess of £45,000.

The works have been consigned by the Marie-Louise von Motesiczky Charitable Trust, and are being sold to further the charitable objects of the Trust and to promote the reputation of the artist.

Speaking of the sale Adrian Biddell, Head of Paintings & Fine Art at Chiswick Auctions, commented: “Marie-Louise was a fascinating artist, with a very distinctive and powerful aesthetic who lived through many of the vicissitudes of the twentieth century. But with so little of her work ever having appeared on the market, she is an artist ripe for rediscovery. Chiswick Auctions are delighted to have the opportunity to work with the Marie-Louise von Motesiczky Charitable Trust to develop interest in her work by offering at auction a group of works that remain with the Trust.”

Frances Carey, Chair of the Marie-Louise von Motesiczky Charitable Trust, said: “Marie-Louise Motesiczky found it difficult to let go of her ‘children’ as she saw her paintings, so most of her work passed after her death in 1996 to the charitable trust she had set up shortly beforehand. After organising a centenary exhibition in 2006-07, and overseeing the publication of a biography in 2007 and a catalogue raisonné in 2009, the charity has been intent on making the work available for acquisition, principally by public collections, and by private owners as well.”

Although rarely on the market, paintings and works on paper by Marie-Louise are in a number of leading cultural institutions around the world, ranging from the British Museum and Tate in London (which also holds her archive) to the Fitzwilliam Museum in Cambridge and the National Galleries of Scotland in Edinburgh.

On the Continent her work is in the collections of the Albertina, Österreichische Galerie Belvedere, the Leopold Museum and the Museum Wien in Vienna, as well as major institutions in the Netherlands, Germany and Ireland.

The eight canvases to be offered by the Trust for sale at auction span four decades from 1945 to the early 1980s. Subjects include portraiture, still-life and landscape, and range from the depiction of her long-time companion and lover, Nobel prize-winning author Elias Canetti, to elegant ladies walking in Regent’s Park and an endearing depiction of the family cat – ‘Suzi’.

The earliest of the works in the group, Study of Canetti (estimate: £3,000-5,000) painted around 1945 is also the earliest likeness she made of the sitter. Canetti (1905-1994) had emigrated from Vienna to England with his wife Veza in 1939, and like Marie-Louise spent the war years in Amersham, north west of London. 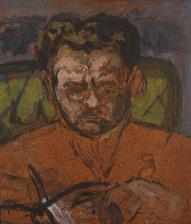 There Marie-Louise and he began a relationship that would last the next three decades. As a man who professed the need to maintain relationships with different women simultaneously, Canetti was by turns supportive and manipulative of Marie-Louise as a person, but never wavered in his belief in her artistic abilities. As late as 1978 he wrote to Marie-Louise: ‘You are a great painter and whether you want it or not, the world will hear of you. Every picture that you paint will enter the history of art.’

Marie-Louise herself both treasured and endured Canetti’s complex personality, accommodating many of his demands, including the housing of a considerable portion of his library in the house she lived in with her mother in Amersham, later keeping a room for him to work in at her home in Hampstead.

If Canetti was one of the pillars of Marie-Louise’s life and work after her move to England, the single most influential figure on her artistic development prior to emigrating from Vienna was the German painter Max Beckmann. Marie-Louise had first met Beckmann in Vienna in 1920, aged just thirteen. As she later recalled of the introduction: ‘A winged creature from Mars could not have made a greater impact on me’.

Recognising Marie-Louise’s artistic aptitude early on, Beckmann was full of encouragement. From the early 1920s, Marie-Louise attended classes in different studios across Europe, first in Vienna, later in Amsterdam and subsequently in Frankfurt, Berlin and Paris where she visited La Grande Chaumière in Montparnasse. Throughout, she and Beckmann kept in regular contact, their paths frequently crossing. He visited her in Paris, and she accepted his invitation to attend his masterclasses in Frankfurt. She also introduced him to a close friend from her teenage years, Mathilde von Kaulbach – nicknamed ‘Quappi’ – who married Beckman in 1925. Later, when Beckmann was already living in exile with Quappi in Amsterdam, Marie-Louise renewed contact with him after the Anschluss, when she and her mother were staying with relatives in The Hague before they moved to England.

In the boldness of her compositions, the largeness of her forms, her colourful expressionist palette, and broad painterly brush strokes, the influence of Beckmann on Marie-Louise’s aesthetic is unequivocal. But she tempers the effect of the German painter’s style by deploying her own enigmatic, singular and poetic narratives. 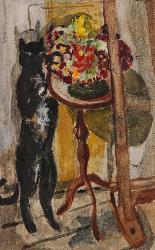 She captures the curiosity of a cat to charming humorous effect in Cat with flowers (estimate: £4,000-6,000). The composition both concertinas and contrasts the feline stretching on her hind legs with the adjacent form of a three-legged table and the rugged upright of the artist’s easel. Painted at Amersham in 1949, the cat named Suzi, was owned by Marie Hauptmann. Marie had been the family wet nurse in Austria, becoming the artist’s surrogate second mother. She accompanied Marie-Louise and her mother Henriette to England in February 1939, and continued to live with them until her death in 1954.

Similarly playful is Lobster of 1953 (estimate: £1,500-2,500). Laid out on a silver salver with accompanying garniture and an unblinking cyclopic eye, the composition borders on the humorous. Indeed, in Marie-Louise’s diary there is more than a hint of the absurd as she records her struggle to capture the essence of the crustacean, triumphantly marking the painting’s completion on  April 13, 1953 with the words: ‘Finally lobster finished, a weight lifted from my heart’.

The work was included in The Renaissance of the Fish. Paintings from the 17th to the 20th Century – a surely tongue-in-cheek exhibition title – at Roland Browse and Delbanco the same year. Other artists represented in the show included Picasso, Matisse and Max Ernst beside emerging British artists William Scott, Prunella Clough, Edouard Paolozzi and Lucian Freud.

Another still life in the sale is Still-life with Inkpot, Ashtray and Matches (estimate: £5,000-7,000) painted in 1960-61. By her own admission, Marie-Louise liked to use subject matter easily to hand. As well as the items in the title, the canvas includes an open book, two feathers and a biro.

Although an apparently prosaic selection, they carry self-referential significance. The book and quills may well allude to her relationship with Canetti. Compositionally, her choice of a narrow horizontal canvas suggests her debt to Beckmann. The format was one that he commonly deployed when painting still-lifes, as it allowed him to imbue apparently humdrum items spread out across the canvas with enigmatic meaning.

Implicit messaging is evident again in Marie-Louise’s small but striking painting Woman holding a Fish (estimate: £5,000-7,000) painted in the 1960s. The theme had been addressed by Beckmann on a much larger scale some thirty years before. In the German painter’s canvases big figures with blank expressions holding over-sized fish fill large canvases. 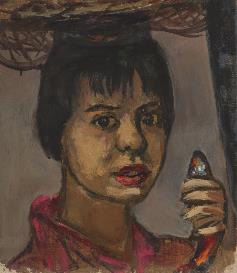 In Marie-Louise’s hands the composition is much more focused: the head of a startlingly fresh-faced girl with bright eyes and gamin good looks, occupies a modest canvas as she grasps in her hand a single, limp, possibly dead, diminutive fish. While Beckmann’s compositions suggest male strength and sexual prowess, in the present work power is clearly in the hands of the woman. As with so many of Marie-Louise’s compositions the underlying message, and for whom it is intended, is oblique.

Drama of the Circus 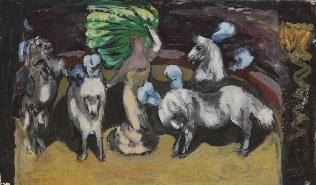 Drama in a quite different context energises Circus Scene (estimate: £7,000-9,000) of 1964. Thought to  be inspired by a circus performance attended by the artist, it is loosely based on three photographs taken at the time (now in the collection of the Motesiczky Archive at Tate). Dramatically lit, the equestrian act takes place in a claustrophobically small arena. In the centre the striking female trainer, dressed in a full length evening gown with low neckline, flourishes a huge green feather boa over her head as she commands to great theatrical effect the stamping and rearing ponies beside her. Stark lighting illuminates and isolates the act, casting deep shadows around the circus ring, while the dusky blues of the plumes that decorate the horses’ heads contrast with the violent green and yellow of the central figure’s boa to create a scene that combines both excitement and energy, with an underlying edge of mystery. 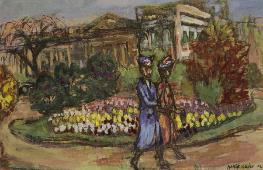 The final two compositions in the consignment are landscapes. Regent’s Park (estimate: £5,000-7,000) was painted in 1951; Mountain landscape (estimate: £2,500-3,500) in 1981. Both are idealized. The former features two elegantly dressed ladies walking in early spring in Marie-Louise’s favourite London park. Behind them blooms a profusion of yellow, white and red bulbs – daffodils, tulips and crocuses. Beyond, behind shrubs and trees, looms the impressive neo-classical forms of one of the park’s distinctive terraces, very likely Cumberland Terrace.

Mountain Landscape was painted following Marie-Louise’s trip to Austria in 1980. The precise location of the view is not recorded, and may very likely be a combination of alpine elements that left their mark on Marie-Louise during her visit. Certainly, as with Regent’s Park and so many of her compositions, she will have used artistic license to rearrange the elements of hillsides and mountains, forest and river, viaduct and village to construct a compositionally satisfying, ever poetic and very personal whole.