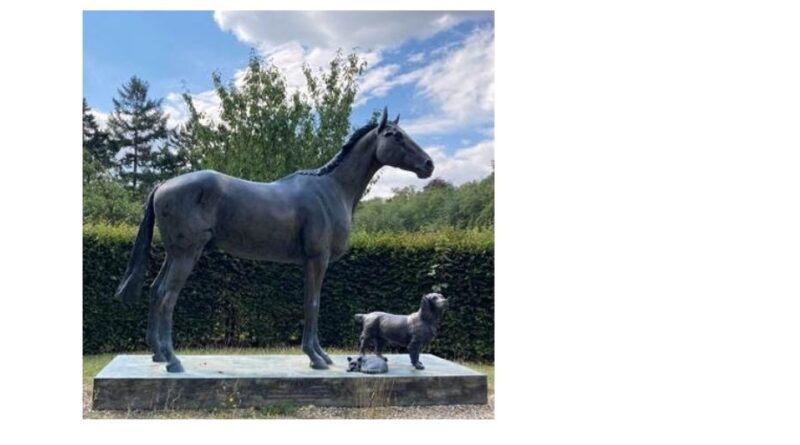 A bronze sculpture of Lord Gyllene, the New Zealand-bred racehorse that won the Grand National in 1997, is to be offered at auction. Created by the celebrated Royal equine artist and sculptor Caroline Wallace, the bronze was commissioned by well-known English businessman and famous horse-race breeder, Stanley W. Clarke CBE (1933-2004), who owned the real-life Lord Gyllene, who died in 2016.

The work in patinated bronze, portrays the famous racehorse standing with a dog and cat resting at its feet and was previously exhibited at the National Horseracing Museum. It is one of the highlights of auctioneers Dreweatts sale of Fine Furniture, Sculpture, Ceramics and Carpets on December 10. It is estimated to fetch £30,000-£40,000.

Clarke presented the work to the Animal Health Trust in 1999, in the presence of Her Royal Highness, The Princess Royal. Its’ plinth features a central presentation inscription, which reads: Lord Gyllene, Winner 1997 – 150th Grand National. Presented by his owner Stanley W Clarke Esq. CBE and Mrs Clarke. Unveiled by Her Royal Highness, The Princess Royal on 30th March,1999 and bears the initials CW of the sculptor.

Clarke’s enthusiasm for horses and horse-racing spanned his lifetime. In 1961 he took out a trainer’s license and subsequently sent out eight winners. In 1966 he began breeding his own racehorses with great success. He became known for raising funds and donating to various charitable causes, including the Animal Health Trust for which he raised millions, helping them to establish a new headquarters. Clarke was appointed CBE in 1990 and knighted in 2001.

The bronze is being sold by the Animal Health Trust which has unfortunately, due to the current Covid-19 crisis, been dissolved. The Animal Health Trust was an independent charity comprising vets, scientists and volunteers. Its aim was to conduct research into the curing of diseases in cats, dogs and horses and to further develop the knowledge and practice of veterinary medicine.