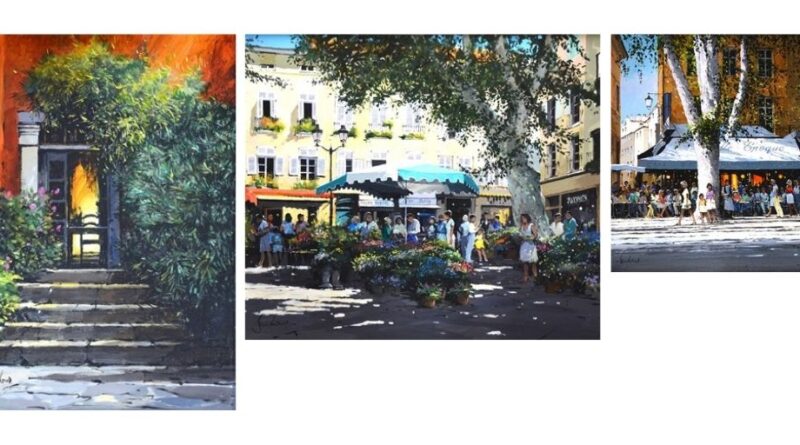 Paintings by one of the UK’s most highly regarded late landscape artists, Jeremy Barlow, attracted great interest in a recent Midlands auction.

The oil paintings by Norfolk-based Jeremy Barlow, who died in November 2020, sold to a number of buyers around the UK for considerably more than his work had previously been making at auction at the recent sale at Gildings Auctioneers in Leicestershire.

All but one of the paintings in the auction depicted Mediterranean scenes. ‘Market Square’ and ‘Belle Epoque’ sold for £1500 and ‘Continental Street’ sold for £1,200.

“It was a pleasure to sell these paintings by Jeremy Barlow who was best known for his skilful use of light and shadow, which is very much in evidence in these pictures depicting the blue skies and sun-dappled landscapes of southern Europe,” says Gildings director Will Gilding.

“While it is common to see a ‘bounce’ in prices in the aftermath of an artist passing away, it was particularly striking on this occasion. The last time we offered paintings by Jeremy Barlow to auction was in February 2020, when we sold three of his paintings for between £55 and £65. Prior to that we sold two of his paintings for £65 and £340 at a Fine Art auction in September 2019.  None of these paintings were in as good condition as the ones sold this month, but nevertheless, the recent prices achieved illustrates the significant rise in demand for paintings by this artist.”

Jeremy Barlow was born in 1945 and studied illustration at Northampton School of Art. He found inspiration for his art both at home in Holt, North Norfolk, where he was well known for his gallery, Jeremy Barlow Fine Art and on his travels to a wide range of locations including France, Spain, Italy and Japan.  As a member of the Royal Institute of Oil Painters (ROI), with over 200 solo exhibitions to his name, Barlow also exhibited at prestigious venues including The Royal Academy of Arts, The Royal Society of Marine Artists and The Royal Society of British Artists.

“It’s possible that the fact that the pictures we sold this month depict the warmer climes that so many of us miss visiting during the pandemic, could have been a factor in the high prices achieved,” adds Will Gilding.  “However, in addition to the price hike caused by art speculators in the aftermath of this well-regarded artist’s death, we are seeing increased demand for the post-war British Art market in general. This this a trend we expect to see continue into the year ahead.”