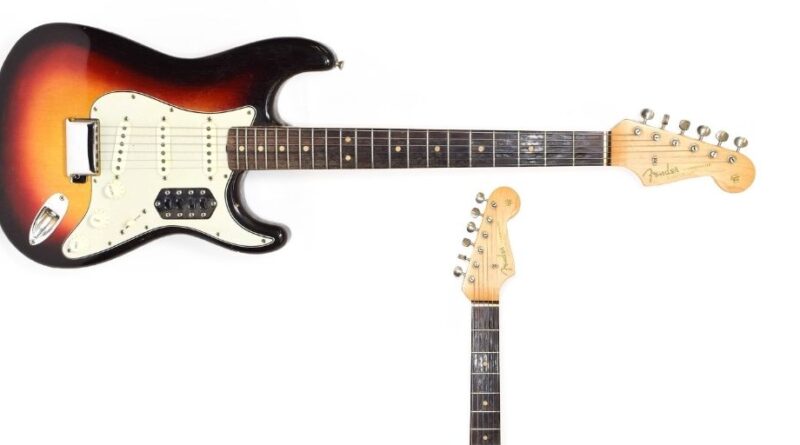 Two rare Pre-CBS Fender Stratocaster guitars – considered by many to be the ‘Holy Grail’ of electric guitars – are to be sold in Tennants Auctioneers’ Scientific and Musical Instruments Sale next month in North Yorkshire.

The Fender Stratocaster, a name synonymous with Rock and Roll, was first designed in 1953 by Leo Fender six years after he had established Fender Guitars.

His first guitar, the Broadcaster (later renamed the Telecaster), was criticised for being too square and uncomfortable to use. The Stratocaster was his response, with its sleek curves and contoured body to fit snugly against the musician, and a host of new features that set its place in musical history and influenced the design of electric guitars for generations to come.

Aided by the legendary Stratocaster, by 1965 Fender was one of the largest musical instrument manufacturers in the world, and Leo Fender sold his company to CBS (Columbia Broadcasting System).

The Stratocasters made by Fender before the sale to CBS are regarded as the finest Fenders ever made. Only produced during the narrow window from 1953-65, Pre-CBS Fender Stratocasters are rare and much sought-after by collectors of vintage guitars.

From the same private collection come a further offering of good vintage guitars in the sale, including a 1976 Fender Precision Bass Guitar, a 1975 Fender Telecaster Custom Guitar and a 1969/70 Fender Jaguar Guitar.

The sale takes place on February 10.