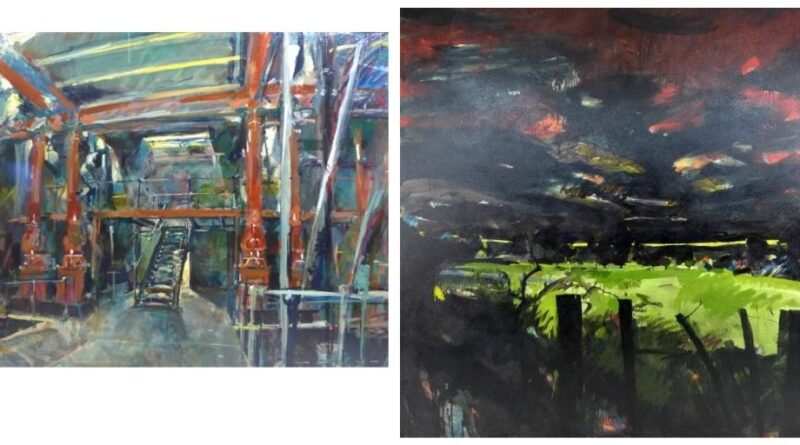 Lincolnshire saleroom, Batemans, said it has two impressive art collections within its Fine Art, Antiques & Collectables auction due to take place on February 6.

The first comes from the estate of the late Geoffrey Pointon, who lived in Uppingham, Rutland. The collection ranges from traditional landscape scenes to modern abstract works, political statement pieces, and is dominated by the work of a single local artist, Michael (Mike) R Hoar ARCA.

Hoar was a British artist born in Evington, Leicester in 1943. He graduated from the Royal College of Art 1964 and worked as a senior Fine Art lecturer at Leicester De Montfort University until 2003. He continued his practice as a professional, international Artist from his studio in South-West France until late into his life. Major commissions include a set of sky-scapes produced for Heathrow Terminal 4, and a set of large paintings produced for the P&O cruise-liner ‘Arcadia’. He sadly passed away in 2017, eighteen months after the death of his wife Lulu Hancock.

Geoffrey Pointon’s collection was formed from a lifelong passion for art, especially paintings, and a long friendship with Mike Hoar, with regular purchases direct from the artist. It includes large impressive pieces of work, valued to sell in the thousands of pounds, down to small sketch studies, prints and archive material, likely to sell for less than £100.

Managing Director & Valuer Greg Bateman said “It is a privilege to be selected by the Executors of Mr Pointon’s Estate to handle such an amazing collection of art, especially as it includes such a rich array of local talent. We hope to do Geoffrey proud, helping continue his promotion of Rutland and its business community.”

Geoffrey Pointon was born and educated in Leicester before serving his national service in the RAF Regiment, mostly in Germany. He he best known as being the founder of Pointon York in 1970 which he ran for over forty years, selling the business in 2014 to fellow Sipp provider Curtis Banks, and as being a very well-known figure in the Sipp and Ssas world, with many recalling “his charisma and good humour” which “never failed to make people smile”.

He was a councillor of the City of London, of which he was also a Freeman, where he spent much of his working life. He was a co-founder of The Biz Club in 2007. This local Rutland organisation provides networking opportunities for business owners with the aim of increasing profitable growth of the smaller business sector; it also develops and encourages communication between politicians and business people.

The second collection, originally from the North of England, consists of a dozen high quality sculptures, mostly in bronze. The private vendor has collected sculpture for over the last forty years, concentrating on acquiring figural bronzes, with 19th and 20th century artists well represented. Having enjoyed them for so many years they have recently relocated and downsized and have decided to reduce the size of their extensive collection.

British artists Sir William Read-Dick, Sir Ian Rank-Broadley, and Karin Jonzen all have a showing, together with European sculptors including Vincenzio Gemito and Heirich Carl Baucke.

It is an impressive and dynamic collection that showcases some incredible talent from the last 150 years.