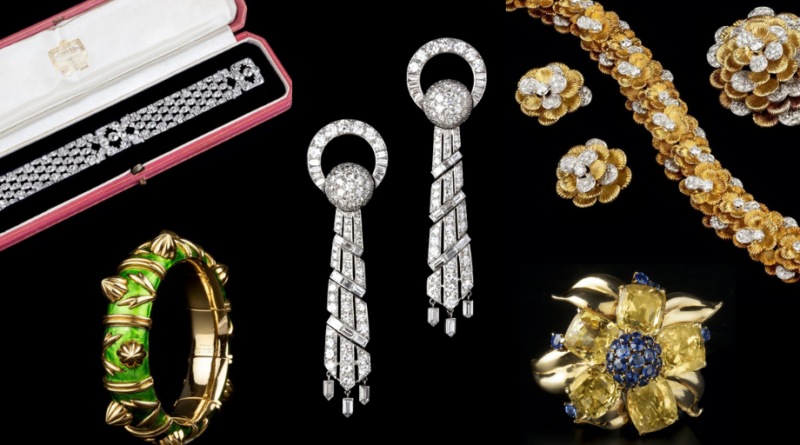 Thinking of selling your jewellery and watches at auction? These hammer highlights from Mallams‘ recent Jewellery & Watches Sales might inspire you to dig out any unwanted gems for a free auction valuation.

This pair of diamond set earrings by Cartier is Mallams’ highest selling jewellery lot to date, achieving £72,000 in November 2017. Symbolic of the Art Deco taste for striking geometric forms and set with approximately 7.80 carats of round brilliant, baguette and trapezoid-cut diamonds, the earrings are a perfect example of ‘day and night’ jewellery, with detachable ribbon drops allowing for extra glamour when worn in the evening. 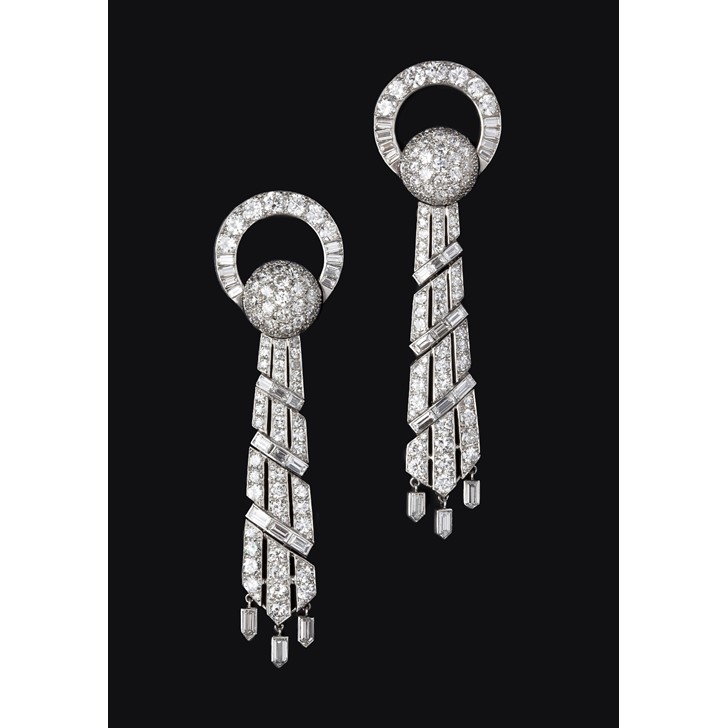 The signature style of Archibald Knox, celebrated designer of the Arts and Crafts, Art Nouveau and Celtic revival movements, can be seen in this gold and enamel pendant necklace. Dating to circa 1900 – 1904, it sold for £31,000 in December 2015, a world record price for a piece of Knox-designed jewellery sold at auction at that time. Featuring sinuous entrelac panels with graduated green and blue enamel, and accompanied by a fitted Liberty & Co. Ltd. case, its design can be directly traced back to the Liberty Jewellery sketch-book.

By repute, this necklace was a gift from Girton College, Cambridge to Viscountess Hilda Runciman (1869 – 1956) in appreciation of her fundraising endeavours for them. Runciman became one of the first female MPs when she was elected as Liberal Member of Parliament for St Ives, Cornwall in 1928, and also served as President of the Women’s National Liberal Federation. 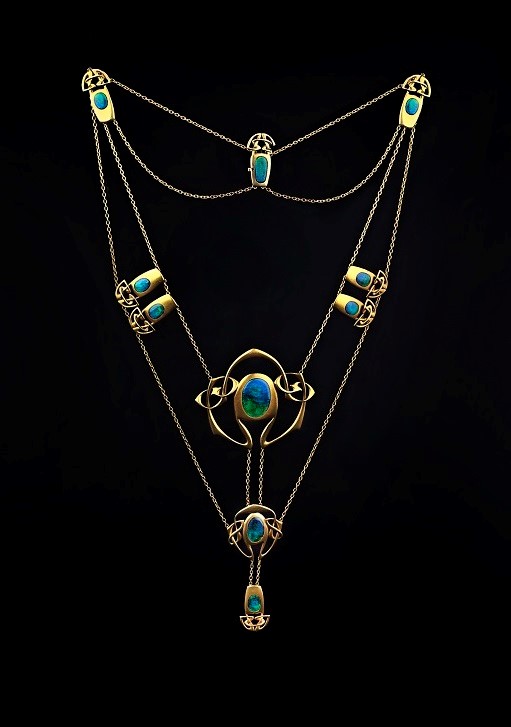 Van Cleef & Arpels created the ‘Passe-Partout’ jewellery suite in 1938. Designed as a snake chain embellished with detachable flower clips, which could be worn together as a necklace, choker, bracelet or belt, it was one of the first transformable pieces designed by the famous French jewellery house. This yellow and blue sapphire ‘Passe-Partout’ flower brooch, signed to the reverse, sold in Mallams’ March 2018 sale for £11,500. 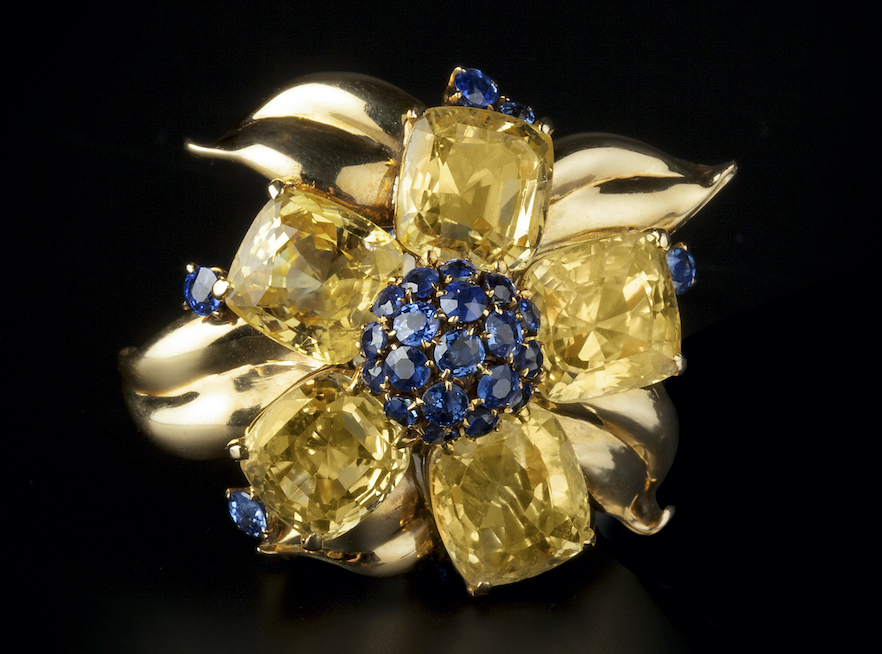 Andrew Grima was one of the UK’s most iconic jewellery designers of the 20th century. This striking green beryl and diamond dress ring bears the trademark modernist design elements that earned Grima a celebrity following from the Swinging Sixties onwards, and sold to a collector for £9,000 in March 2019. 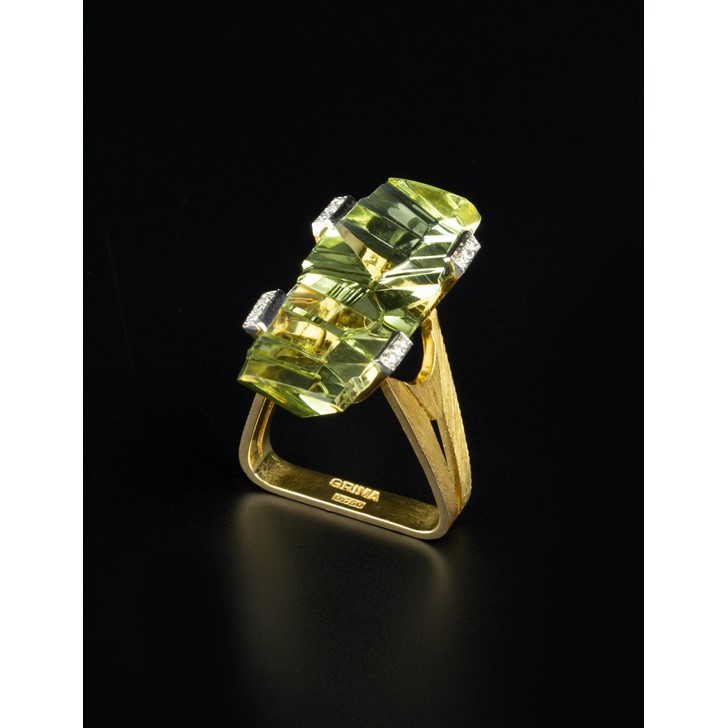 Natural pearls of good sizes have been highly sought after on the auction market in recent years. This diamond and red enamel brooch, cased by Collingwood Ltd., features a stylised honeysuckle spray issuing two natural saltwater pearls and achieved £18,000 in Mallams’ November 2017 sale. 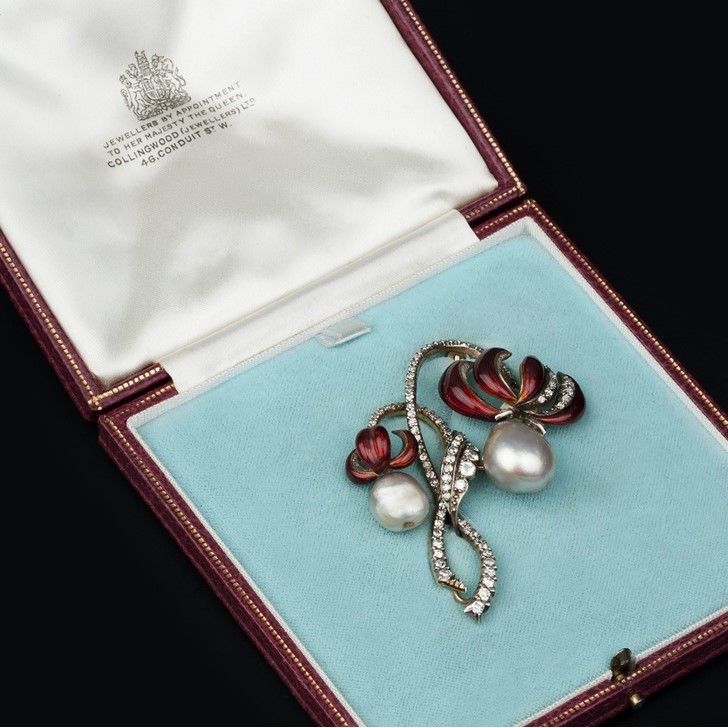 Consigned with its original fitted gilt-tooled leather case, this stunning Art Deco diamond panel bracelet by Cartier made £25,000 in November 2018. Featuring a honeycomb-linked strap spaced by geometric panels, this bracelet was commissioned as a wedding gift during the early 1930s, utilising old-cut diamonds from an earlier piece. 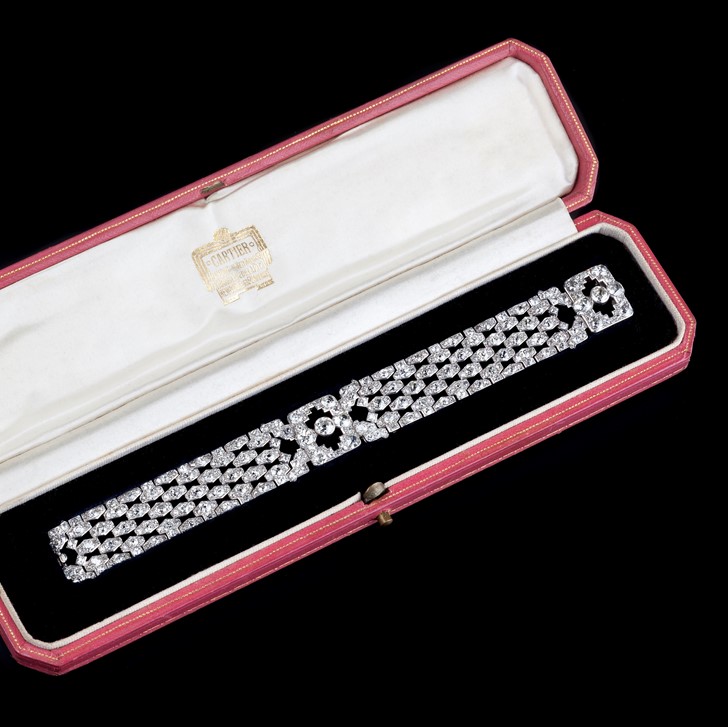 Jean Schlumberger, the celebrated French-born jewellery designer whose clients included Wallis Simpson and Elizabeth Taylor, established a reputation for bold, colourful jewellery design inspired by natural forms from the 1950s onwards. This vibrant green enamel ‘Paillone’ bangle, designed by Schlumberger for Tiffany & Co. and bearing French marks, sold for £9,000 in Mallam’s November 2019 sale. Schlumberger remains one of only four designers that Tiffany & Co. allowed to sign their work, and the jewellery house continue to produce his designs. 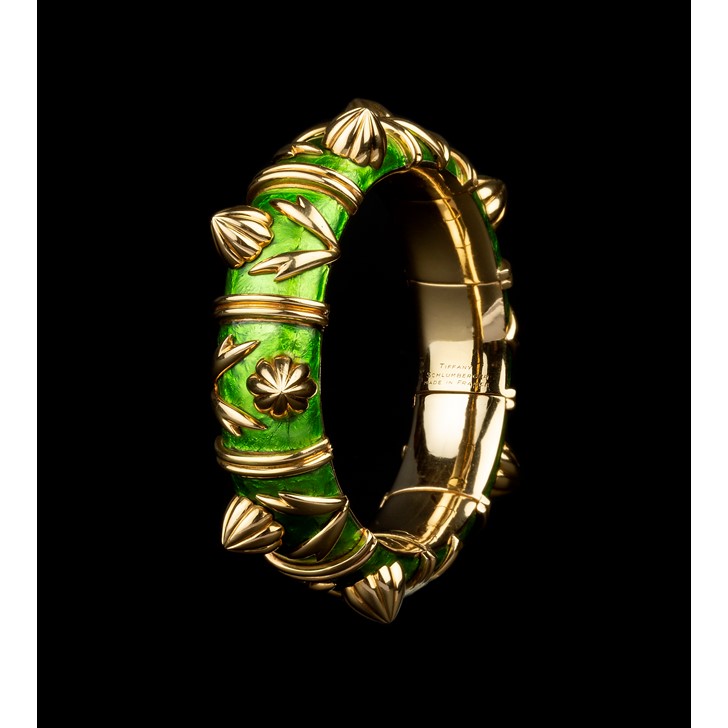 Dating from the late 18th to early 19th century, this rare garnet and diamond set cross pendant of the Portuguese Order of Christ achieved £4,800 in Mallams’ December 2020 sale. Antique Portuguese jewellery dating from the 17th century onwards is renowned for its varied use of coloured gemstones and precious metals, often sourced from locations within its empire, such as Brazil and Portuguese India, and is coveted by jewellery collectors. 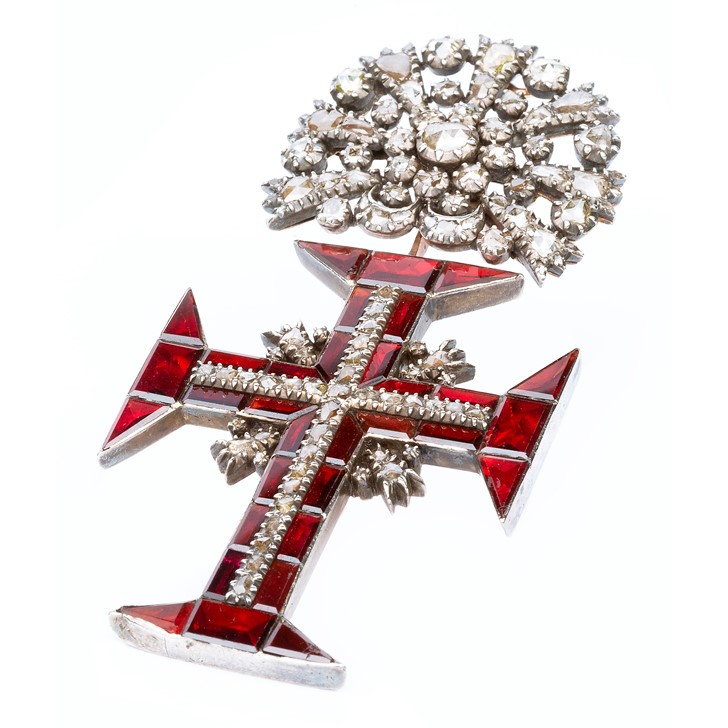 This distinctive diamond set flower brooch, bracelet and ear clips suite by Kutchinsky, the London-based jeweller famed for exuberant and bold designs, dates to the mid Sixties. Highlighted by diamonds totalling approximately 7.50 carats and crafted in 18 carat gold, this suite sold for £11,000 in March 2018. 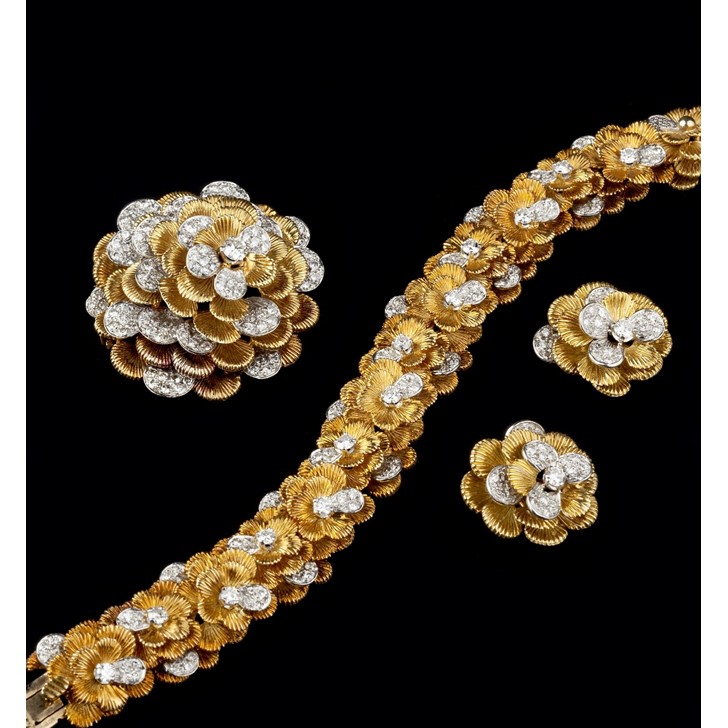 Omega introduced the ‘Speedmaster’ range of chronograph wristwatches in 1957, originally for use in sports and racing, to complement their position as the official timekeeper for the Olympic Games. This example, dating from the early 1960s and accompanied by maker’s case and guarantee, made £13,500 in Mallams’ July 2019 sale. Later examples of the Omega Speedmaster were famously worn by NASA astronauts for the moon landings and Apollo missions of the US space exploration programme, bringing iconic status to the range. 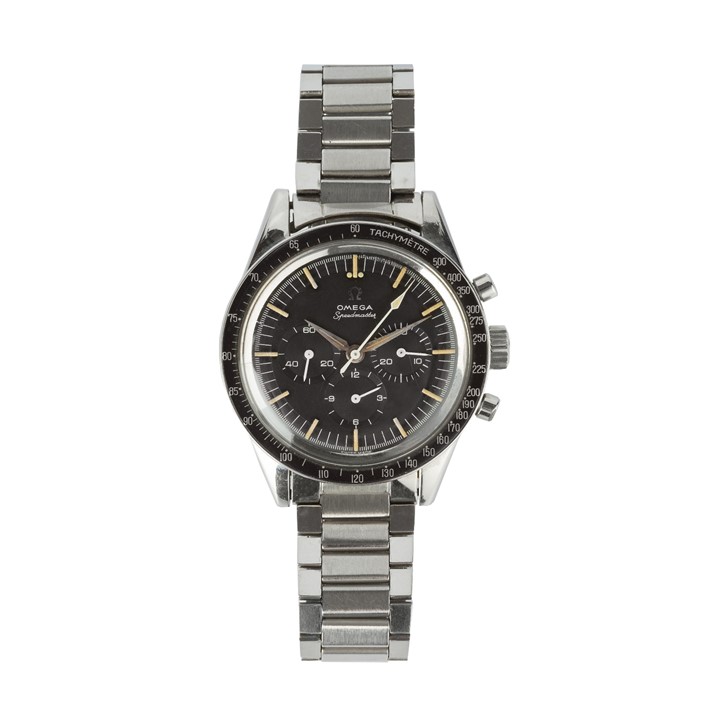