An important group of Central Intelligence Agency (C.I.A) medals presented to “one of America’s greatest intelligence officers” will be offered by Dix Noonan Webb in their live/ online auction of Orders, Decorations, Medals and Militaria on Wednesday, February 17, 2021 on their website www.dnw.co.uk.

The medals – each framed and hidden behind a lithograph picture of the Middle East – are being sold by the family and expected to fetch £2,000-3,000. 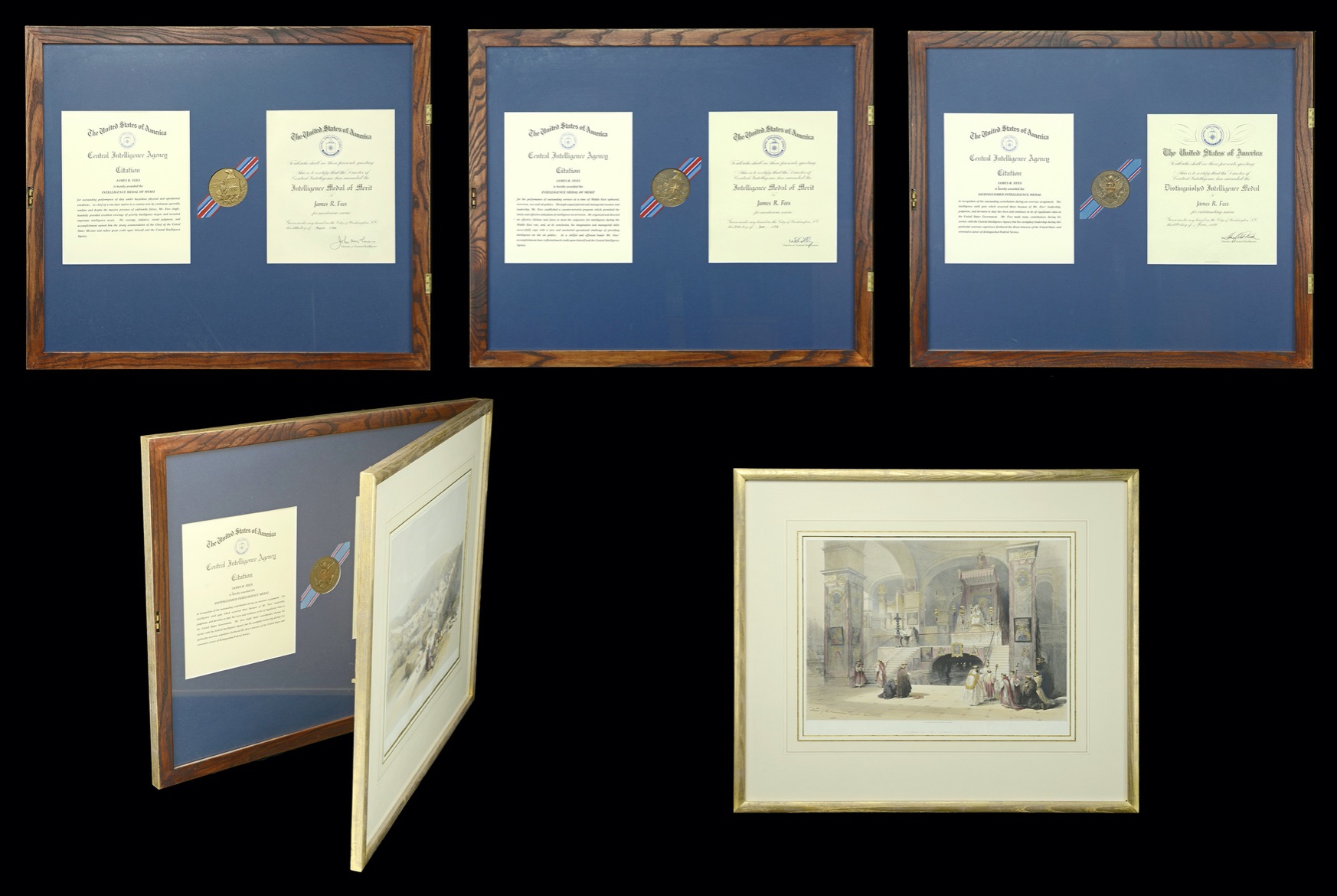 Described by espionage expert, John Barron, author of KGB: Secret Work of Soviet Secret Agents, as: “one of America’s greatest intelligence officers,” the medals were awarded to legendary veteran C.I.A. officer Jim Fees (born in Nebraska in 1931) who, from the early 1960s, served undercover in Africa, Europe, and the Middle East; organised and managed secret intelligence operations from Washington and three continents, including a number of covert operations; and commanded major paramilitary operations in various International locations.

As personal adviser to President Reagan on sensitive terrorism issues, he conducted top-secret missions to Lebanon and elsewhere in a bid to free American hostages, and most notably was also responsible for the secret acquisition and delivery to the U.S. of the Soviets’ most advanced frontline fighter plane at the time.

The group includes the United States Distinguished Intelligence Medal, which is awarded by the Central Intelligence Agency for ‘performance of outstanding services or for achievement of a distinctly exceptional nature in a duty or responsibility’. Also included is two Intelligence Medals of Merit, which were awarded by the Central Intelligence Agency for ‘performance of especially meritorious service or for achievement conspicuously above normal duties’.
As Christopher Mellor-Hill, Head of Client Liaison (Associate Director) of Dix, Noonan, Webb, explained: “To quote a reference article on these medals: ‘CIA medals are often referred to as “jock strap medals” since they are often awarded secretly (due to the classification level of the respective operation) and cannot be displayed, or on occasion, even acknowledged publicly.’  In line with above, the recipient had had his three awards with their citations, individually mounted in specially-designed gatefold, gold-leaf frames. The outer frames each with an original scenic, Middle Eastern lithograph by the well-known artist David Roberts. Therefore, on looking at each of the hung pictures, one would be no wiser of their inside content unless they were opened up to reveal the C.I.A. medals and citations.”
Share this...