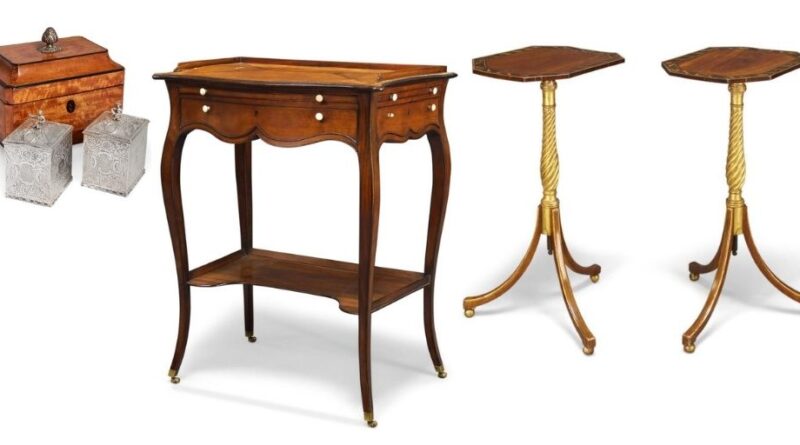 The single owner collection of the late Herbert Kennard, who died at 100 years old in March 2020, is to be sold at Roseberys London later this month.

Mr Kennard still lived in the apartment in which he was born in St Johns Wood, London, although he had travelled extensively and worked abroad. He had a deep affection for the arts, especially opera and ballet, alongside a passion for late 18th-century English furniture, particularly satinwood which features prominently in the sale.

Leading the highlights from the auction is a pair of Regency parcel gilt and painted satinwood occasional tables/pole screens, coming with a provenance from Ronald Phillips Ltd antique shop, June 18, 2006. The octagonal tops are wonderfully decorated with a floral painted border, on adjustable stands and gilt spiral turned column supports to tripod legs raised on spherical feet. The pair of tables come with an estimate of £2,000 to £3,000.

Elsewhere in the sale is a pair of Regency satinwood waterfall bookcases, with four graduated shelves above single drawer to base, on square tapering and curved feet. The pair of bookcases come with a provenance from Lennox Cato antique shop and have been entered onto the market at £1,500 to £2,000.

Other satinwood items within the sale is a pair of George III Sheraton satinwood cutlery urns. The solid urn finials above boxwood and ebony chequered inlaid lids and matching body are on moulded square bases, on bracket feet, with void interiors. They come with a provenance from Patrick Sandberg Antiques, London, November 8, 2003 and an estimate of £800 to £1,200.

Coming with the same estimate of £800 to £1,200 is a George III satinwood and crossbanded tambour writing desk. The tambour enclosing red leather inset writing surface is on an adjustable ratchet mechanism, over single frieze drawer, raised on square tapering legs to brass caps and castors. Like most items within the sale this lot comes with a provenance from a respected antique store, this one coming from Lennox Cato, November 15, 2010.

A pair of decorative wall brackets have been entered into the market with an estimate of £1,000 to £2,000. The pair of George II giltwood and gesso Ho-Ho bird wall brackets, central bird above C scroll support, holding shell plinths. They were bought from Avon Antiques in Bradford-on-Avon, Wiltshire, July 5, 1993.

Another prominent feature within the auction are an extensive collection of over 50 tea caddies. Leading the highlights within the collection is a pair of George III silver tea canisters, Edward Darvill, London, circa 1760 have been entered into the market with an estimate of £1,500 to £2,500. Each tea caddy is of rectangular form with floral scroll repousse decoration, the side panels with engraved crest and shield and the domed hinged covers with Chinaman finials, on pierced collet feet. They are presented within a later satinwood two division caddy with silver bud finial on four silver shell bun feet, the silver hinges hallmarked RG, Sheffield 1812.

Another elegant tea caddy included within the auction is this rare and large walnut and parquetry “sideboard” tea caddy, 19th century. Decorated overall with geometric designs, the front inlaid with the Prince of Wales feathers and inscribed ICH DIEN, enclosing two canisters and a glass blending bowl, it is estimated to make £800 to £1,200.

Also included in the sale is an impressive collection of silverware on offer. Highlighting the silverware within the sale is this German 800 silver tea service, Frankfurt-am-Main, 1870-1930, Lazarus Posen. The tea service compromises of an oval tray, a tea pot, hot water pot, lidded sugar pot and milk jug, together with a matched tea strainer and stand (stamped 800, not marked Posen), each decorated with laurel leaf banding and monogram, the pots with pine cone finials and the tea and coffee pots with foliate decoration and ivory spacers to handles. This silverware set comes with an estimate of £1,000 to £1,500.

Rounding up the highlights on offer is this Victorian satinwood cased library clock on brass feet by Frodsham and Baker, circa 1860. The engraved silver dial has Breguet style hands and the backplate is stamped Frodsham, Gracechurch St, London. It comes with an estimate of £1,000 to £1,500.