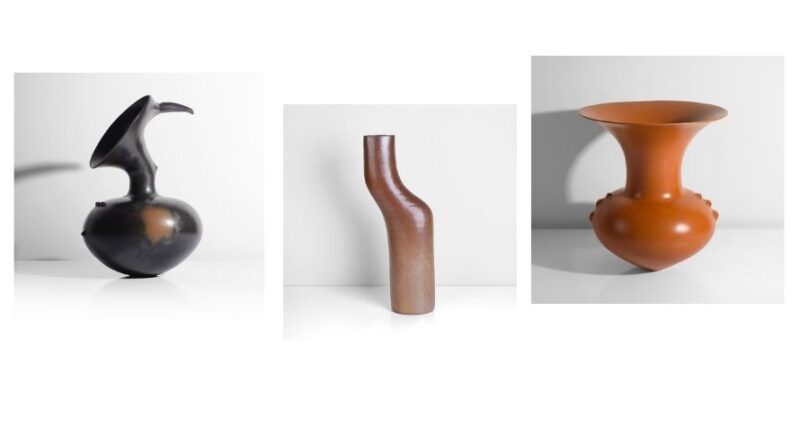 Leading ceramics auction house Maak marked 10 years of specialist ceramic sales with a set of impressive results. The ever increasing enthusiasm for unique pieces of studio ceramic art looks set to continue with auction results from the 307 lots seeing an 85% sale rate and a 152% value result against the mid-estimate.

The work of ceramicist Dame Magdalene Odundo’s continues to gain international recognition. With Maak having achieved a world record for a living ceramic artist in November 2020 with the sale of Angled Mixed Coloured Piece, 1988 by the Kenyan born artist, selling for £240,000, Odundo again featured as two star lots in the recent spring auction; the two major works from 1991, were presented to the market by Maak for the first time since they were acquired by an important international collector in 1992. High levels of international interest led to competitive bidding from multiple parties with the first piece selling for over six times its high estimate to reach £96,000 with the second work reaching £126,000 (inclusive of 20% buyers premium).

Further highlights from the sale include an artist record achieved for British ceramicist Joanna Constantinidis, with her iconic Body Pot, from 1975 fetching £18,000.

The auction also included some 40 works from The Chestnut Gallery Collection, a personal collection from the original owners of the renowned gallery in Bourton-on-the-Water, Gloucestershire. Highlight pieces from the collection included a number of vessels by John Ward, such as his highly sought-after matt black and white forms which continue to attract strong results. Two of his works sold for £14,400 and £10,800 respectively.

Other artists included in the collection who achieved outstanding results were Lucie Rie and John Maltby. Provenance proved an important influence for buyers with a Tapered Vase from circa 1965 by Lucie Rie selling for over double the top estimate for £19,200. The vase was originally part of Rie’s personal collection of ‘distinguished pots’ that she wouldn’t part with in her lifetime, eventually forming part of her Sale of Lifetime estate sale in 1996.

The auction also included a varied selection of works by contemporary Akiko Hirai, whose recent exhibitions have sold out in a matter of hours, the high demand for her works subsequently resulting in ever rising hammer prices. The large Moon Jar is a particularly fine example of this highly sought after form sold for £4,560.

Marijke Varrall-Jones, Founder and Director of Maak said at the conclusion of the May auction, “I’m immensely proud of how the Maak has grown over the last 10 years to be internationally recognised as the leaders in our field. The whole Maak team is passionate about building an ever wider appreciation for studio ceramics and our provision of specialist expertise to private collectors, institutions and ceramic enthusiasts has allowed us to be at the forefront of the growing market of this beautiful work.”