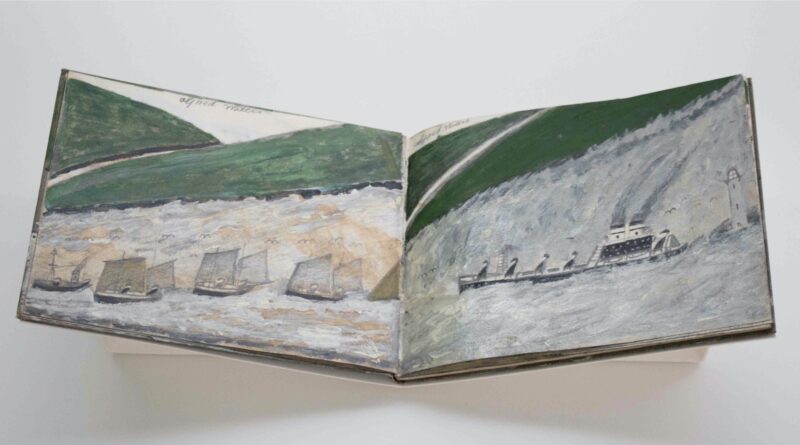 Kettle’s Yard in Cambridge has announced the acquisition, jointly with Tate, of three important and rare sketchbooks by self-taught artist and mariner Alfred Wallis (1855-1942). All three sketchbooks were made in the last year of the artist’s life, which he spent in a workhouse near Penzance due to illness and poverty. 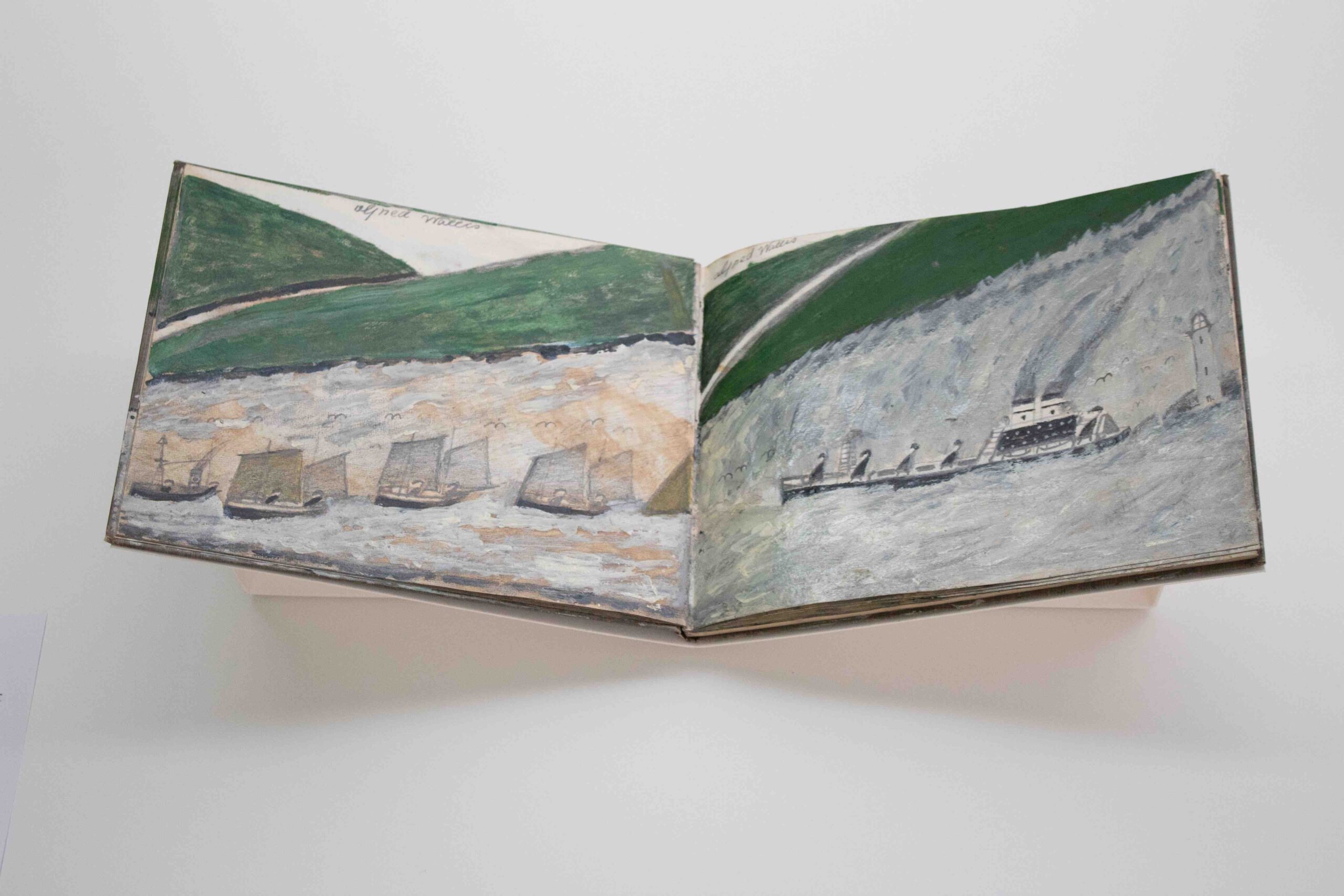 The sketchbooks are currently on display in ‘Alfred Wallis Rediscovered’, at Kettle’s Yard until 20 June 2021. Prior to this exhibition, they had not been exhibited in a public exhibition for over 50 years and very little was known about them or researched. They have now been purchased jointly by Tate and Kettle’s Yard with funds provided by the National Heritage Memorial Fund, Tate Members and Friends of Kettle’s Yard, and with Art Fund support.

Most of Wallis’s works are difficult to date, but these sketchbooks are the exception to this rule, definitively produced in the last year of his life. At the workhouse, called the Madron Institute, Wallis was removed from his marine ship paints and the off-cuts of cardboard and wood, as well as household items such as jugs and trays, that he would often use. Instead, he became reliant on artists’ materials supplied by Ben Nicholson and Adrian Stokes – sketchbooks, pencils, crayons and enamel paints.

The sketchbooks are filled with pencil and crayon works, and some paintings. The sketches are not preparatory studies for larger works, but self-contained works in their own right and feature many of the recognisable subjects and scenes to which Wallis repeatedly returned throughout his lifetime. Wallis signed his name on many of them, suggesting by this time that he had an increased awareness of himself as a professional artist. 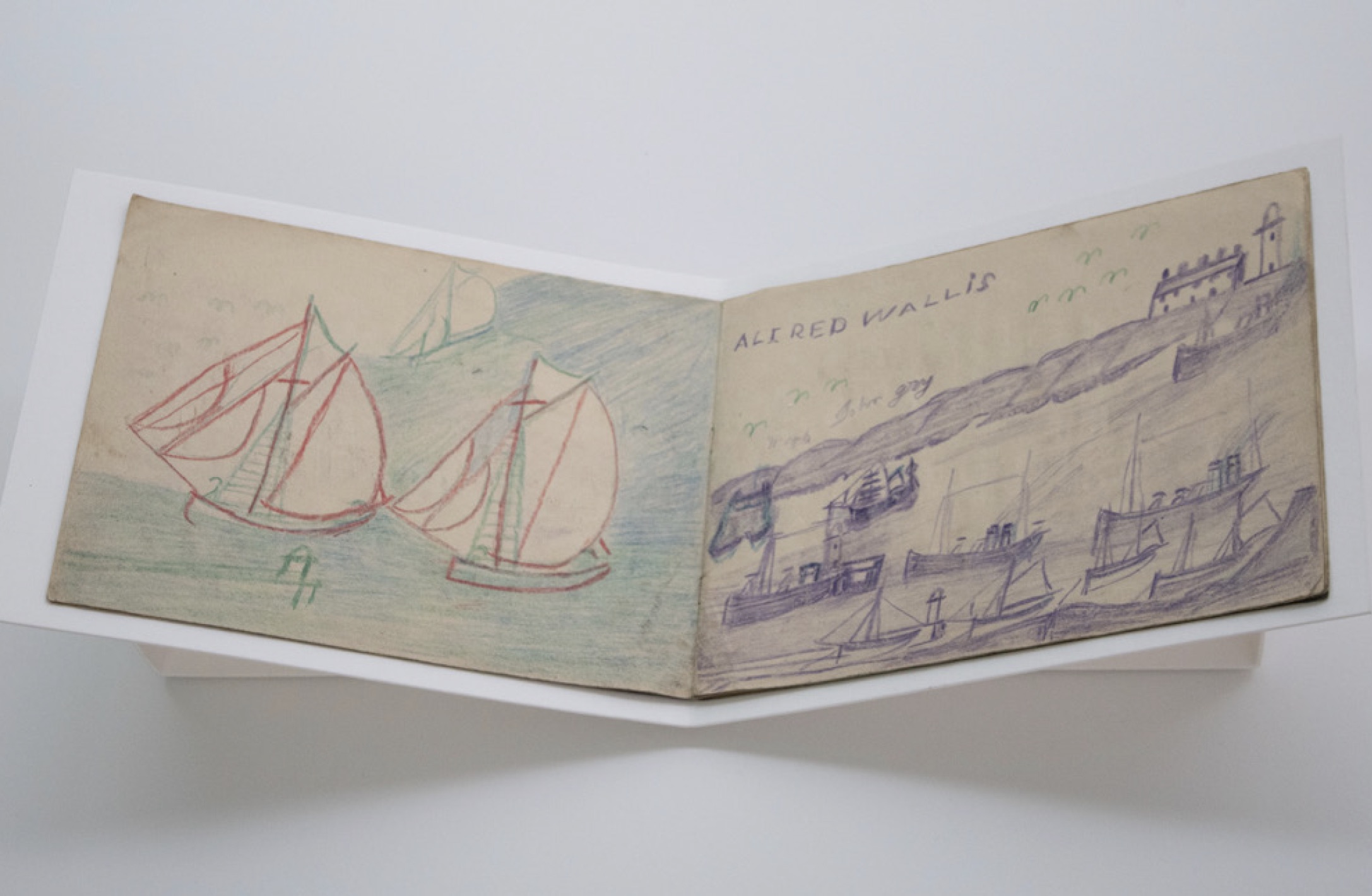 The books also contain religious subjects which perhaps point to the artist’s awareness of his own mortality in the final year of his life.

Alfred Wallis lived most of his life in Cornwall, working on deep-sea fishing boats and as a marine scrap merchant. He had no formal artistic training and turned to painting in his 70s, after the death of his wife, as a means of escaping his feelings of isolation and loneliness. Wallis worked mostly from memory, playing with proportions and perspective, and painting on scraps of board with a reduced colour palette. His drawings and paintings capture the immediacy of his experiences of the sea, depicting fishing vessels and local Cornish landscapes in an expressive style.

‘Discovered’ in 1928 by artists Ben Nicholson and Christopher Wood, Wallis occupies a pre-eminent position in the history of British art as an untrained artist. He is a key figure for understanding the turn towards a more direct, authentic approach to painting made by Wood, Nicholson and others. Kettle’s Yard is a natural home for the sketchbooks as its founder, Jim Ede, was one of Wallis’s principal patrons. He regularly bought work by the artist and was instrumental in cementing his reputation after his death. The two men corresponded regularly between 1929 and 1938, building a close epistolary friendship, and during those nine years Ede amassed over 120 paintings. As a result, Kettle’s Yard has the most substantial institutional holding of work by Wallis anywhere in the world, 35 of which are on permanent display in the Kettle’s Yard House. 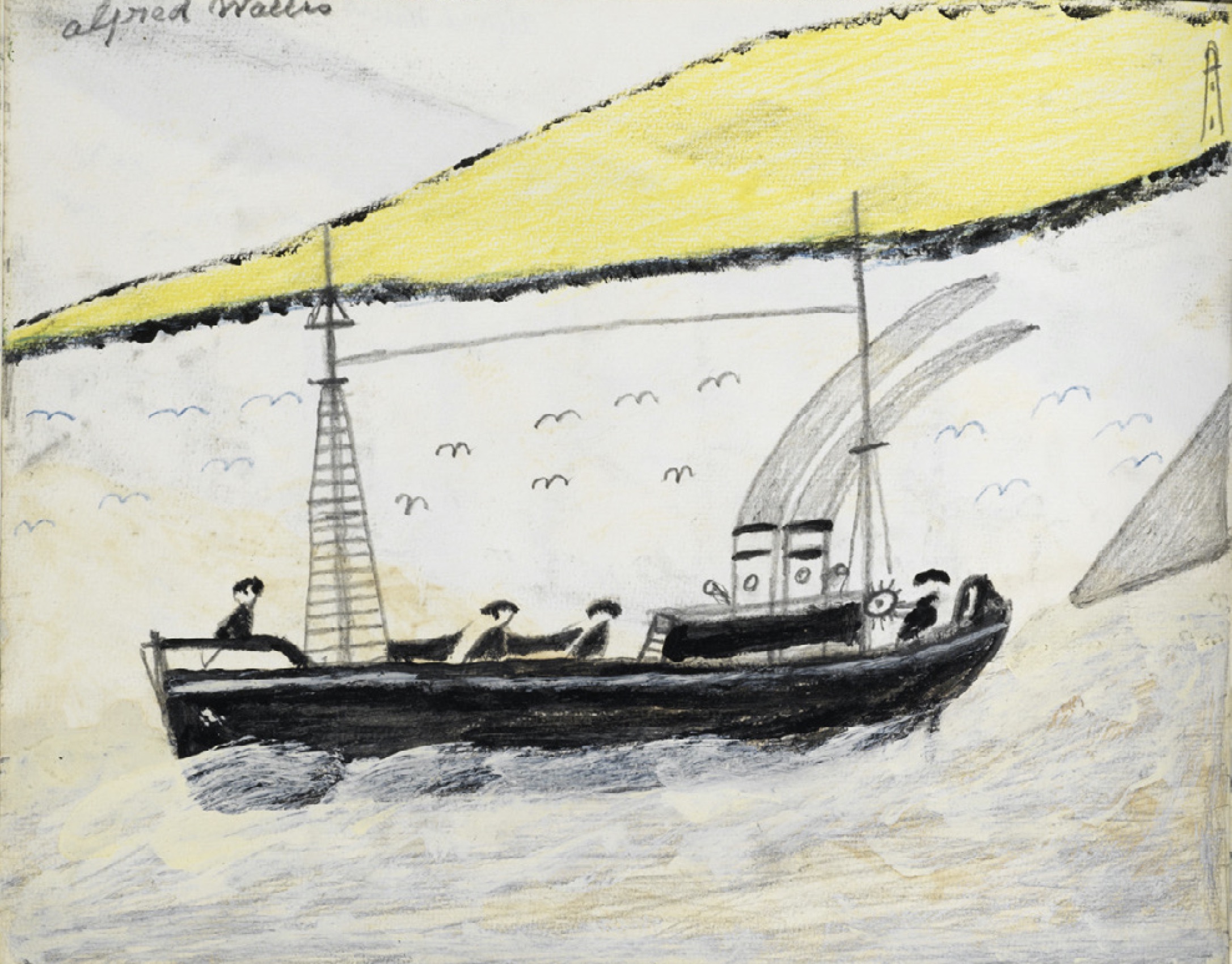 The sketchbooks have been digitised in order to enable viewing of all of their pages through film and online.

Andrew Nairne, Director of Kettle’s Yard has said: “We are thrilled to be jointly acquiring these remarkable artworks with Tate, which adds to our understanding of the work of this exceptional artist. The sketchbooks are presented in our current exhibition Alfred Wallis Rediscovered, and have been really appreciated by visitors.”

Polly Staple, Director of Collection, British Art, Tate has said: “We are delighted that these unique objects can enter the collections of Tate and Kettle’s Yard. Alfred Wallis is a key figure in British Art and paintings by the artist can be found in both collections, as well as on display at Tate Britain and Tate St Ives. These significant sketchbooks show us how he continued to draw subjects and themes that were close to his heart right up until the end of his life. We are extremely grateful for the opportunity to preserve and display these rare works, thanks to the support of National Heritage Memorial Fund, Tate Members, Friends of Kettle’s Yard and Art Fund, which has enabled this acquisition.”

Dr Simon Thurley CBE, Chair of the National Heritage Memorial Fund, has said: “We at the National Heritage Memorial Fund are delighted to support the acquisition of these charming and important sketchbooks, which illustrate the last year of Wallis’s life and artistic output. We are also pleased that thanks to the digitisation of the pages, Alfred Wallis’s paintings are now available for everyone to explore online.”

Jenny Waldman, Director of Art Fund has said: “The special qualities in the work of Alfred Wallis are an inspiration to many. Art Fund is proud to support the joint acquisition by Kettle’s Yard and Tate of these fascinating sketchbooks which show how his artistic output remained undimmed right to the end. It is fitting that these beautiful items have found their home in two institutions where there are such relevant connections to the artist’s life and work, and where they can be seen by enthusiasts and a new generation of fans.