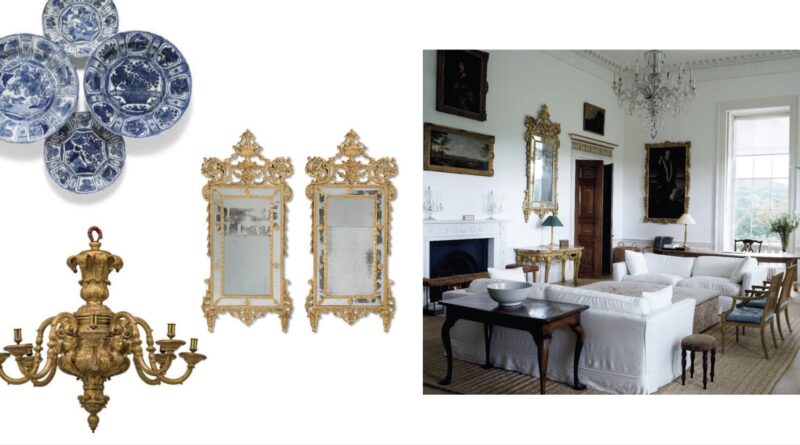 Furniture and works of art that belong to the designer Jasper Conran will be sold in two sales at Christie’s next month.

Jasper Conran The Collection will be offered in a Live auction (Part I) at Christie’s London headquarters on the September 14 and an Online sale (Part II) that is open for bidding from September 1 to 21 .

Christie’s said that the collection provides a remarkable window in to the purity, simplicity and silence of the magical interiors that Jasper Conran created at Flemings Hall; Walpole House, Chiswick; Ven House, Somerset and most recently New Wardour Castle.

The collection offers a refined contemporary approach to the best of country house style, with the rigour and discipline that underscore Conran’s unique taste.

Jasper Conran commented: “During the last forty years I have had the good fortune and privilege of being able to buy wonderful things from some of the greatest dealers in paintings, objects and furniture in this country including Christopher Gibbs and Peter Hinwood, Mark Weiss, Peter Hone, Will Fisher at Jamb and Edward Hurst. I don’t lay claim to being one of the world’s greatest collectors but I do think I have a beady eye for the beautiful.”

“We have moved to a seventeenth century house in West Dorset which is much smaller than its predecessors. Given the scale of our new home there is simply nowhere to put the collection that I have gathered, so now is the time to part. Am I sad? Yes of course, since there are several rare and precious things with wonderful provenance that I have loved and appreciated living with; HOWEVER I am pragmatic and would much rather these lovely objects go on to have new lives in new homes. They were after all, made to be seen, used and enjoyed.”

Benedict Winter, Christie’s Head of Sale, commented: “Christie’s is honoured to offer the collection of Jasper Conran whose style and vision are legendary. With his unique take on the country house, Jasper has collected wonderful pieces with equally wondrous provenances, pointing to the rich history of British collecting over the last four hundred years. It has been a joy for Christie’s to collaborate with Jasper on this exciting two part sale and to research and more deeply understand the objects that he lived with in his homes over the years.”

The Collection includes a large group of Old Master portraits. The sale is led by a magnificent portrait of Cecilia Neville by Robert Peake from Grimshaw Hall (estimate: £500,000-800,000).

Having hung companionably alongside Cecilia Neville in the White Drawing Room at New Wardour Castle, a further leading highlight is a portrait of Jasper’s ancestor Anthony Maria Browne, 2nd Viscount Montagu, circa 1593 (estimate: £400,000-600,000).

Formerly in the posession of Geoffrey Bennison (1921-1984) – one of the most celebrated decorators of the 20th century – is A pair of ornamental landscapes with birds by Aert Schouman (estimate: £80,000-120,000). Bennison’s clients included Terence Stamp, Lord Weidenfeld and David de Rothschild; such was his appeal and curation of clients, those who succeeded in commissioning him became known as ‘the happy few.’

An elegant pair of George III giltwood console tables circa 1760, after a design attributed to Thomas Chippendale carry an estimate of £200,000-300,000.

The magnificent Longleat Giltwood Chandelier, circa 1720-30, is attributed to Benjamin Goodison, the Court Cabinet-maker of the day, who enjoyed extensive Royal patronage (estimate: £200,000- 300,000). Pertinently, Jasper recalls – in his catalogue introduction for this sale – that it was during a weekend stay at Longleat as an eight year old boy, that “amongst the early English portraits, hand painted eighteenth century Chinoiserie wallpapers, furniture from several centuries and leather bound books burnished in gold, a passion that has lasted a lifetime was born.”

Further highlights include: A George II grey-painted pier mirror circa 1735-40, in the manner of William Kent (estimate: £40,000-60,000); a pair of early George III white-painted simulated-bamboo window seats by William Vile and John Cobb, made by William Strickland for Forde Abbey, dated 1764 (estimate: £25,000-30,000); a George II mahogany serpentine sofa attributed to Paul Saunders, circa 1755-60 (estimate: £20,000-30,000); The Rousham Wall Brackets, a pair of George II mahogany wall brackets designed and supplied by William Kent, circa 1740 (estimate: £30,000- 50,000). Originally designed for Rousham Park in Oxfordshire probably the most celebrated of Kent’s commissions. Acquired in-situ at Flemings Hall, The Medici Vase, late 19th century, was once in the collection of photographer Angus McBean (estimate: £30,000-50,000).

Chinese and Japanese Works of Art