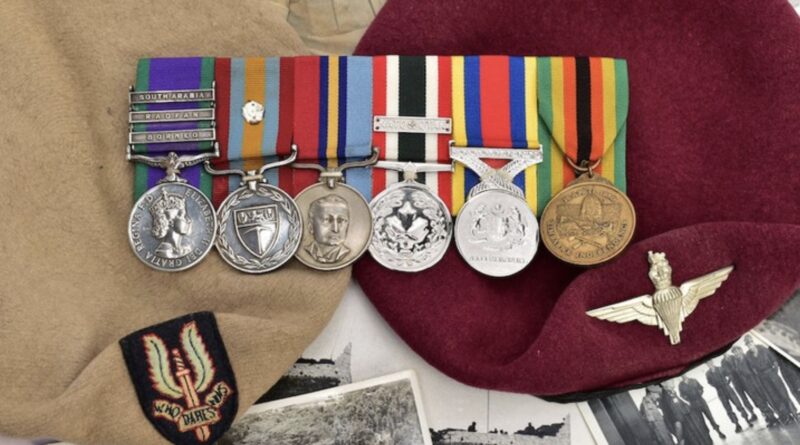 A set of Special Forces medals awarded to a soldier whose military career began somewhat spontaneously when he signed up to replace his worn-out shoes with army boots are coming up for auction in Lichfield.

The unique group of six medals to SAS trooper Roger Tattersall represent “the highest achievements of soldiering and bravery” of a member of Britain’s elite Special Forces. 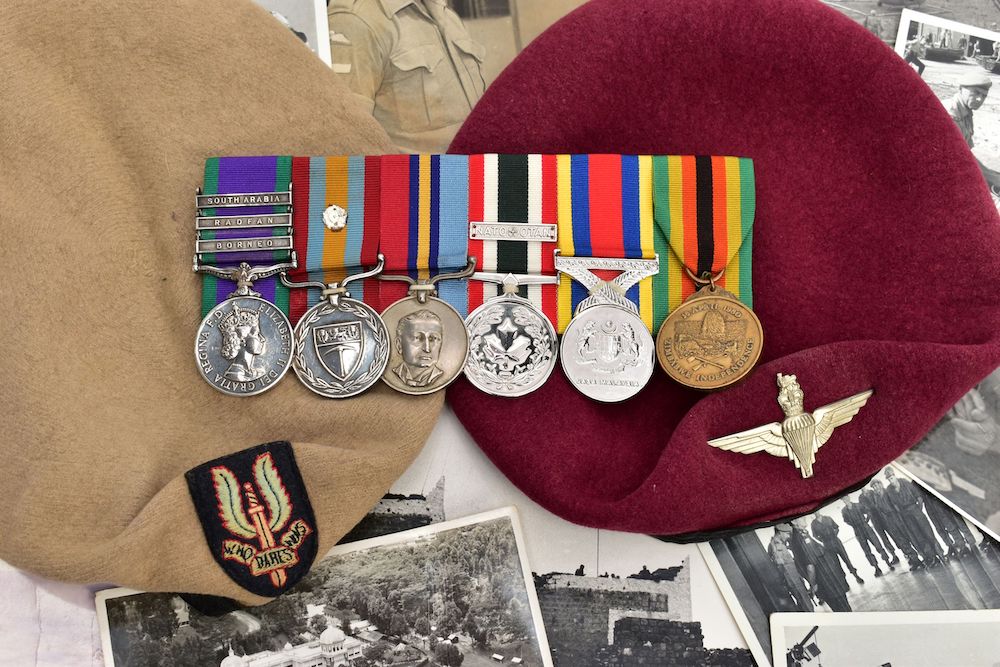 They are guided to fetch £9,000-£12,000 at auction in September with Richard Winterton Auctioneers.

Tattersall was a member of the Canadian Guards, the Parachute Regiment, 22 SAS Regiment, Rhodesian SAS and South African Forces.

His medals group, under the hammer live from The Lichfield Auction Centre on Monday, September 6, come to sale by order of the family.

Professionally court mounted, the group is as follows: 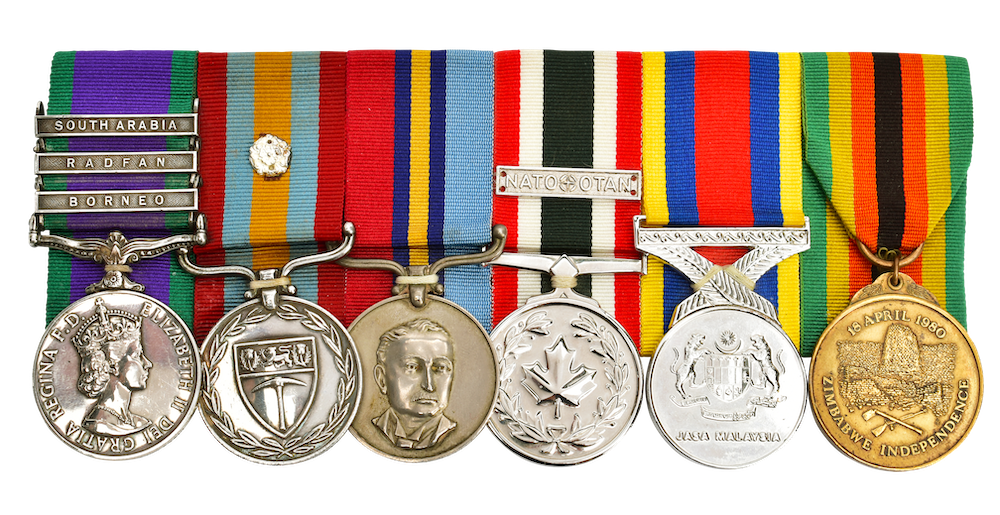 Alongside the medal group in the lot are Tattersall’s SAS beret (Rhodesian issue); Parachute Regiment beret, Rhodesian issue; non-marked 1st type dress uniform blue ‘stable’ belt; and more than 20 photographs featuring Tattersall and comrades in places such as Aden, Radfan and Borneo plus one showing Tattersall being presented with a medal.

All items are original as issued and were owned by Tattersall.

“It is not often that Special Forces medal groups come to auction and we are especially proud to have been given the opportunity to bring this archive to the market,” said Nick Thompson, militaria specialist at The Lichfield Auction Centre.

“It represents the highest achievements of soldiering and bravery of a member of our elite Special Forces.”

McAleese served with the British Parachute Regiment, 22 SAS, Rhodesian SAS and South African 44 Pathfinder Coy, 44 Parachute Brigade, before getting involved in the failed attempt to eliminate the world’s most wanted man Pablo Escobar in 1989 – recently depicted in the film Killing Escobar.

“We are now in a position to offer a similar and in its own way totally unique group to not only a serviceman who served with the Parachute Regiment and SAS but was actually a colleague and friend of Peter,” said Mr Thompson.

“This group of medals is made even more unique by the fact that Tattersall first started his military career with the Canadian Guards Regiment.

“The medals also offers an insight to the varied theatres served by the forces of our nation and in particular the somewhat severe threats posed and dealt with by the SAS.

“We at Richard Winterton Auctioneers are honoured and delighted to be able to offer the second such group in just over a year.”

Born June 30 1938, Roger Tattersall emigrated to Canada in 1956 as a 17-year-old. It was there that he found himself stood outside an army recruiting office, encumbered by problems with the soles of his shoes. 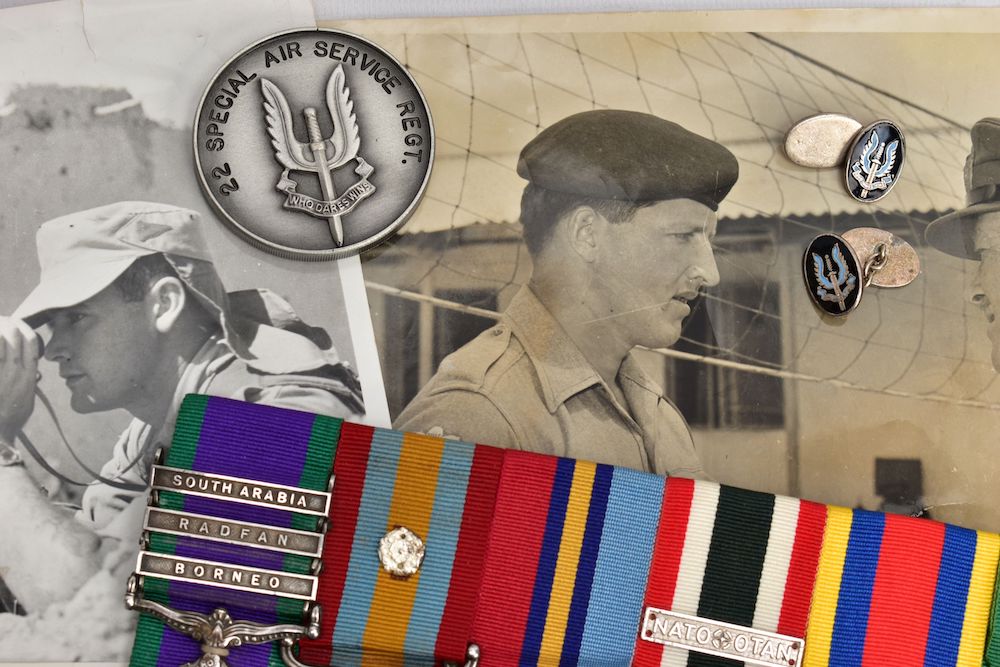 In that moment he decided to enlist in the Canadian Guards.

Whilst serving with the Canadians, he was deployed to West Germany in a NATO role with the Army of the Rhine.

He later left the Guards and Canada, returning to the UK where initially he became a mobile car mechanic with the AA.

But in 1961 Tattersall enlisted into the Parachute Regiment, where he became a friend and colleague of Peter McAleese in “A” Coy 1 Para.

Both were posted to and served in Bahrain.

Tattersall followed McAleese and passed the SAS selection course in 1961 and was deployed to Aden, where he became embroiled in the Aden Emergency or Radfan Uprising.

It is believed from sources in the family and colleagues that Tattersall was part of the Edwards Patrol on April 29 1964, where a number of soldiers were killed in the intense fighting and British forces withdrew.

Tattersall served with the SAS from 1961-1968, during which time he also served in Borneo and teamed up again with Peter McAleese on at least one SAS mission.

In 1967 Tattersall married and left for South Africa, serving with their forces until 1969 when he joined the Rhodesian SAS.

When he finally left the forces in Africa, the family returned to the UK, where in civilian life Roger Tattersall forged out a successful career in construction and engineering with Morrisons Engineering.

“This lot represents a magnificent and distinguished service of his country in our nation’s elite 22 SAS Regiment,” added Mr Thompson.

It includes more than 100 lots of medals, militaria, uniforms and apparel, swords and daggers and antique and sporting guns.

Recalling his part in Operation Market Garden, Johnstone told a local Lincolnshire newspaper in 1994: “I can remember going out in the glider, sitting at the back with the side door open. We didn’t really know that things weren’t going to plan. We came back on Monday night. I’ll always remember coming back because we were given a hot bowl of cocoa! I guess we were very lucky.”

194 men from Johnstone’s unit went into Arnhem; 44 died, 79 were missing, killed or captured and only 71 made it out.

“This group represents the finest in the traditions of the British fighting soldier,” added Mr Thompson.