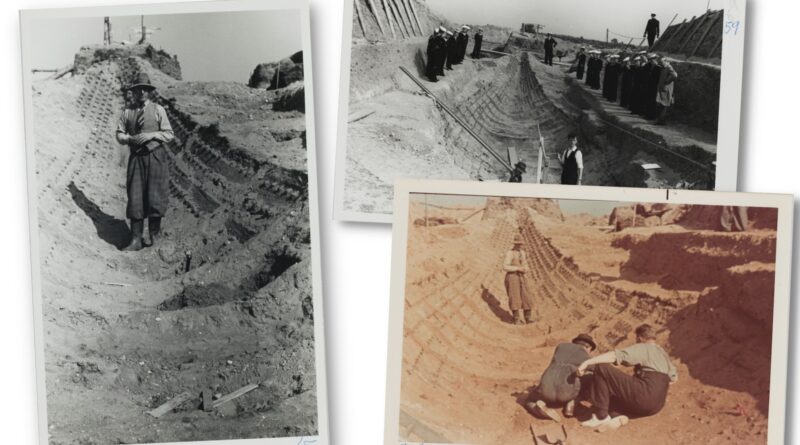 A large collection of photographs capturing the celebrated 1939 excavation of Sutton Hoo in Suffolk have been conserved and digitised for future generations.

The full personal collection of photographs taken by school mistresses Mercie Lack and Barbara Wagstaff have been digitised and online for the first time in a new display at the site of an Anglo-Saxon ship burial, run by the National Trust.

Schoolmistresses and close friends, Mercie Lack and Barbara Wagstaff, were serious amateur photographers with an interest in archaeology. In the summer of 1939, they visited Sutton Hoo in Suffolk and went on to create an extraordinary photographic record of one of the greatest archaeological discoveries of all time.

As part of the conservation process, each page of the albums was photographed as well as pictures taken of the individual prints and the many annotations, resulting in over 4000 images capturing every detail.

Visitors to Sutton Hoo can now access and enjoy digital flickable versions of Mercie Lack’s photographic albums, before walking down to the site where they were taken, and the full Lack and Wagstaff collection will now be available to access online.

In addition to the black and white photographs, Mercie Lack and Barbara Wagstaff each managed to obtain a roll of 35mm German Agfa colour slide film, which went briefly on sale in Britain before the outbreak of the war. They are among the earliest surviving original colour photographs of any major archaeological excavation and provide a completely different dimension to the collection.

What makes the collection unique is not just the pictures themselves, but the annotations Mercie Lack added to her albums which provide a remarkable insight into the people and process behind the excavation. Both Mercie Lack and Barbara Wagstaff went on to become Associates of the Royal Photographic Society.

Laura Howarth, Archaeology and Engagement Manager at Sutton Hoo, said: “Mercie Lack was staying with her aunt when she heard the exciting news of the discovery of an Anglo-Saxon ship burial nearby. She visited the site and obtained permission from lead archaeologist Charles Phillips to return with Barbara Wagstaff in order to photograph the excavation. Both had a keen interest in history and archaeology and during previous holidays, had travelled across the country photographing Anglo-Saxon stone sculptural details for the British Museum such as at Lindisfarne.

“The official photographs were given to the British Museum, but our collection seems to be the personal set which these two photographers kept as their individual mementoes. Mercie Lack’s photographic albums are meticulously annotated with not only who and what we are looking at in the photographs, but often the technical details of how the photographs were taken, such as the type of film and aperture. A real labour of love, this information provides an invaluable additional layer of detail to each photograph.

“Present on site between the 8 and 25 August 1939, Mercie Lack and Barbara Wagstaff took approximately 60% of the total number of recorded contemporary negatives from the excavation. Whilst the treasure had been removed from site by this point, their contribution to the archaeological record remains hugely significant, particularly recording details of the fossil of the ship. This ‘ghost ship’, as Mercie Lack referred to it, is something that no longer exists today but we can experience it through their photographs.

“The collection is also a slice of social history in documenting an excavation taking place on the eve of the Second World War, and photographs capture notable visitors to the site such as the artist W.P. Robins, a group of naval cadets and Princess Marie Louise, granddaughter of Queen Victoria.

“Amongst the collection gifted to the National Trust were drafts of the beginnings of an unpublished book that Mercie Lack was writing on her Sutton Hoo experience. With her photographs and writing, we are able to see through her eyes and hear in her own words the events of this thrilling summer of discovery.”

The original photographs are in a fragile condition and need to be kept in a closely controlled environment to prevent deterioration. By digitising the collection, the images have been preserved and can be easily accessed and enjoyed by many more people without fear of damaging the originals.

Anita Bools, Senior National Conservator, Paper and Photography for the National Trust, said: “Staff and volunteers from Sutton Hoo, photographic materials conservators and professional digitisation specialists collaborated to help conserve and digitise the collection. It was very appropriate – and rather moving – this took place entirely on site, in the same location where Lack and Wagstaff took the photographs, meticulously recording the excavation of the Anglo-Saxon ship burial.

“The conservation and digitisation of the photographs – particularly Mercie Lack’s albums – had to be undertaken with great care. Although her annotations appear fresh and the images are unfaded, the paper pages are very thin and could easily be torn. It is perhaps an indication of how important the photographs were to her: they were clearly looked after and handled carefully. I feel that these two brilliant women would be pleased to know that through this conservation and digitisation project, people today can explore scenes recorded over 80 years ago, and sense something of the thrill Mercie Lack and Barbara Wagstaff experienced as the ship burial was revealed.”

Visitors to Sutton Hoo can see where the photos were taken from the newly opened 17-metre-high viewing tower, which provides a view down onto the Royal Burial Ground. The tower is part of a £4 million project to transform the site and visitor experience, which included the refurbishment of Tranmer House, which now tells the story of Edith Pretty who instigated the dig and archaeologist Basil Brown.

Hilary McGrady, National Trust Director-General commented: “It is over eight decades since the thrilling discovery at Sutton Hoo but the story and those involved continue to fascinate people who visit the site. I am delighted that we can now share even more of that story and particularly the achievements of two women who recorded history unfolding before their eyes. It is one of many special places in our care where we are exploring collections in more depth and providing new ways to enjoy them.”

Andrew Lack said: “I am delighted to be able to share my great-aunt’s collection, she would have been thrilled. Sutton Hoo remained one of her great passions.”

The new digital flickable albums are on display in Tranmer House, alongside rotating projections of photographs taken by Basil Brown and others during the time the treasures were being unearthed.

Other items from the Lack and Wagstaff collection such as the sweet box in which some of the photographs were originally kept, correspondence and a copy of a book in which one of Mercie Lack’s images was published, are part of an autumn display at the property, inspired by the Trust’s new book ‘125 Treasures of the National Trust’, featuring Lack and Wagstaff.