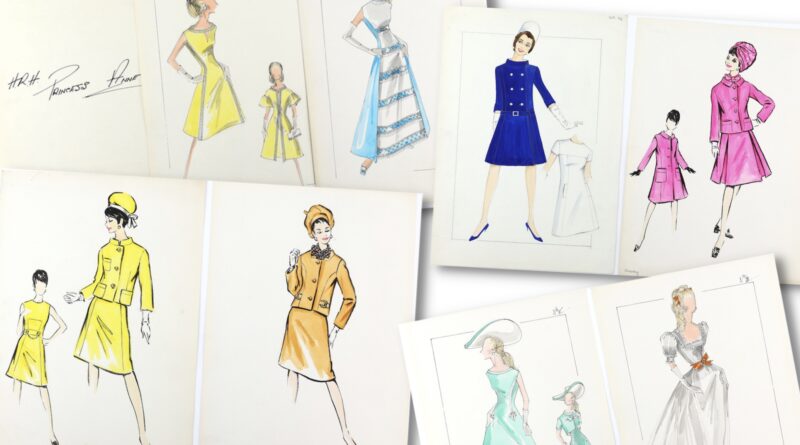 Fashion designs by Royal dressmaker Sir Norman Hartnell will be auctioned as part of a large archive of drawings and other papers by Surrey auctioneers Ewbank’s on November 11, including scrapbooks revealing a row over Princess Margaret’s imminent wedding. 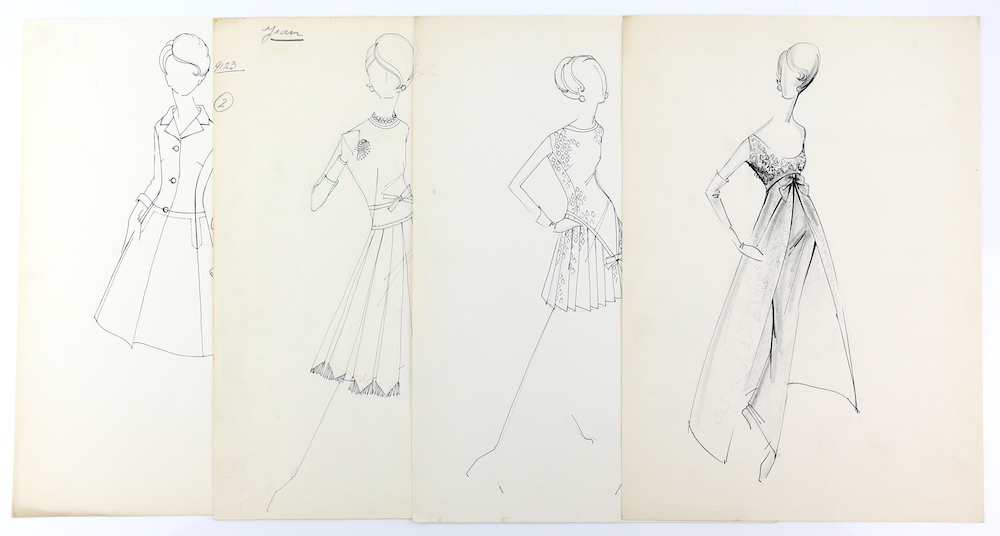 The designs and documents, mostly relating to the 1960s and 70s, were the personal gift from one of the last owners of the company, to the vendor. Together they show that Hartnell and his team retained their inspirational touch for chic, class and feminine grandeur. Estimates start from £100.

Hartnell (1901-79) was well-known as a royal favourite, gaining his first Royal Warrant as Dressmaker to Queen Elizabeth, The Queen Mother, in 1940. His most celebrated creation was the Queen’s Coronation gown, but his last commission for a full State occasion was the wedding dress for Princess Margaret – as well as dresses for the Queen and Queen Mother, and the bridesmaids’ dresses – when she married Antony Armstrong-Jones, later Lord Snowdon, on May 6, 1960. 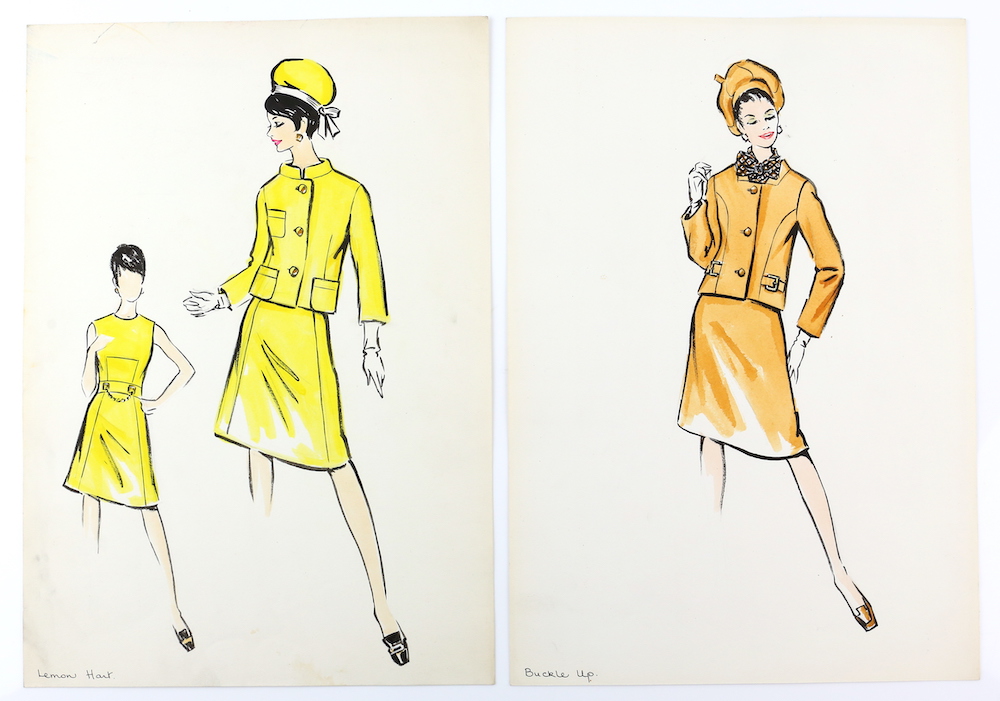 Papers included in the sale at the Surrey auction house relate to a brewing media scandal in the days leading up to the 1960 wedding of the Queen’s sister, Princess Margaret.

A week before the wedding, the Daily Express published an article claiming that Norman Hartnell Ltd had taken out a £10,000 insurance policy against the cancellation of the wedding, a claim that caused a scandal and put the company’s Royal Warrant at risk.

Among the papers are legal documents describing the row, including Sir Norman’s personal denial of the claims and his previous altercations with the journalist concerned, Peter Baker, in February 1960. Another document, from the general manager of the company, George Mitchison, sets out how Baker had ‘hounded’ him at his office and made multiple threatening phone calls regarding the claims.

“This would have been an extremely shocking claim at the time,” said Ewbank’s partner and auctioneer Andrew Ewbank.

“To make such a claim about any royal wedding would have caused huge distress and embarrassment. However, after the scandal and fall-out of the Townsend affair, which had kept Princess Margaret in the headlines for much of the early to mid 1950s, this would have been seen as a particularly vicious attack, and one that would undoubtedly have put Hartnell’s business and Royal Warrants at considerable risk.” 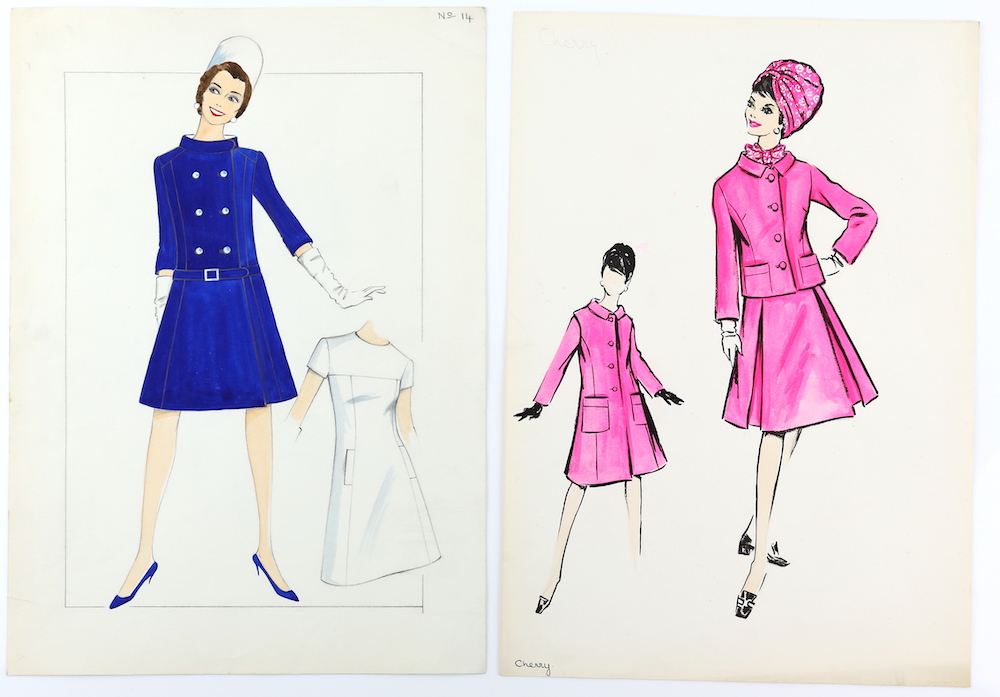 In fact, the letters of proof given as evidence by Mitchison showed that the company had asked for a quotation for such insurance. However, the company’s general manager stated that this was “in accordance with the usual practice obtaining on such occasions”, rather than because of any doubts over the Princess.

Among many eye-catching designs are two original 1970s fashion illustrations in watercolour pen and pencil. Many of the watercolour drawings are of classic 1960s and 70s designs.

“The crispness of the images, light touch and flow of the designs, as well as the sense of movement and quality that they convey have an extraordinary immediacy about them,” says Ewbank’s vintage fashion specialist Susan Orringe.

One of two original 1970s illustrations is an embellished evening dress in turquoise and white, while the other is an A-line dress in lemon with a matching coat. 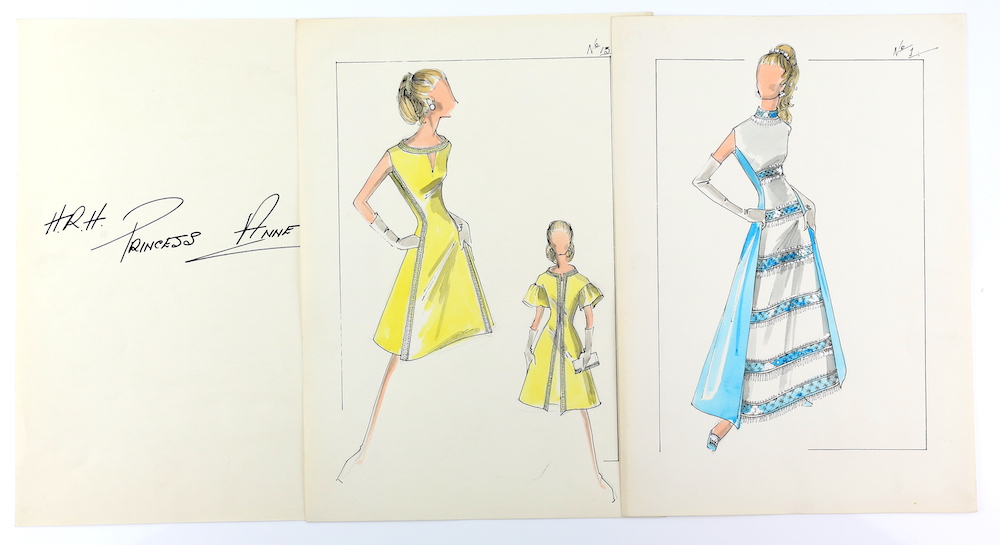 Among the dozens of designs are smart daywear, costumes for attending events like race meetings, and formal evening wear – reflecting Hartnell’s place as a society couturier.

The consignment, which includes two scrapbooks of international press cuttings, also features a sketchbook file full of complete and incomplete designs from the 1960s painted in watercolour, as well as fabric swatches and multiple pages of handwritten notes.

Some of the design sketches are also included in printed form in the two copies of the book Introducing the House of Hartnell, also included with the consignment.

Along with a large box of sew-in labels, Norman Hartnell letterheaded paper and other pieces of Hartnell ephemera, the consignment provides a unique insight into the workings of the company and the thinking behind the inspired designs.