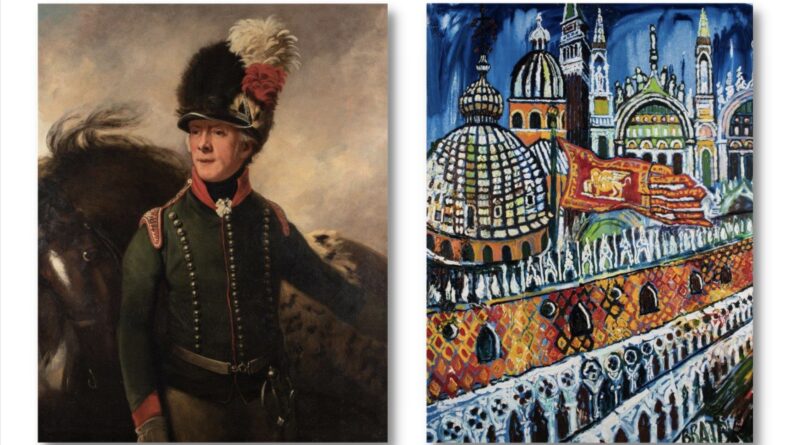 From 18th-century artist Edmund Becker’s delicate depiction of trees in pen and ink, with an estimate of £80-£120, to 20th-century painter John Bratby’s bold brush strokes of a Venetian vista, estimated at £2,500-£3,500, there are pictures to appeal to most palates (and purses) in an upcoming auction at Olympia Auctions.

Among the highlights are a small group of dashing British Military portraits including a spirited depiction of E.D. Brisco Esq, 1st Captain of the Provisional Cavalry of the West Riding of Yorkshire, 2nd Regiment and his horse by Philip Reinagle (1749-1833), estimated at £4,000-£6,000. 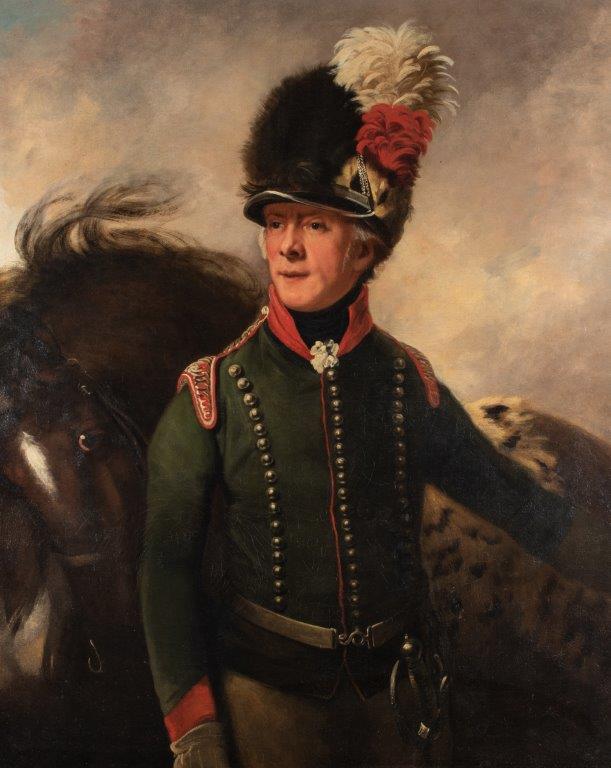 Work by established artists from the 19th century include a Pair of Country Views by Frederick Waters Watts, a Farmyard by William Henry Hunt, Clouds by the ‘Ancient’ George Richmond, and a pair of Female Nudes by William Edward Frost all with estimates under £1,000. A well painted and poetic ‘A View from Edge Hill, Warwickshire’ by another eminent 19th century painter and Royal Academician Frederick Richard Lee, is estimated at £1,200-£1,800.

Modern British pictures comprise works by Edward Wolfe including ‘Song of Songs’, a set of 12 signed offset lithographs estimated at £500-£700, an atmospheric ‘Fisherman’s Story’ by Carel Weight, £1,000-£1,500, and two paintings by John Bratby including the striking ‘The Spirit of Venice: St Mark’s with Erroneous Geography’ (the artist’s own title) estimated at £2,500-£3,500. An early self-portrait ‘Red full-face self portrait’ dated 1964 was bought directly from Bratby by the vendors.

The large scale ‘Jacob Sutton with a scarf as a Turban’ by Phillip Sutton, a Royal Academician who taught at the Slade, is estimated at £1,000-£1,500 and ‘Untitled 1958’ by Peter Kinley is estimated at £700-£1,000. An original sample curtain titled ‘West Wind’ designed by Duncan Grant for the flagship liner RMS Queen Mary carries an estimate of £200-£300. Grant’s designs were rejected at some cost to the artist’s reputation in the Cunard affair of 1935. 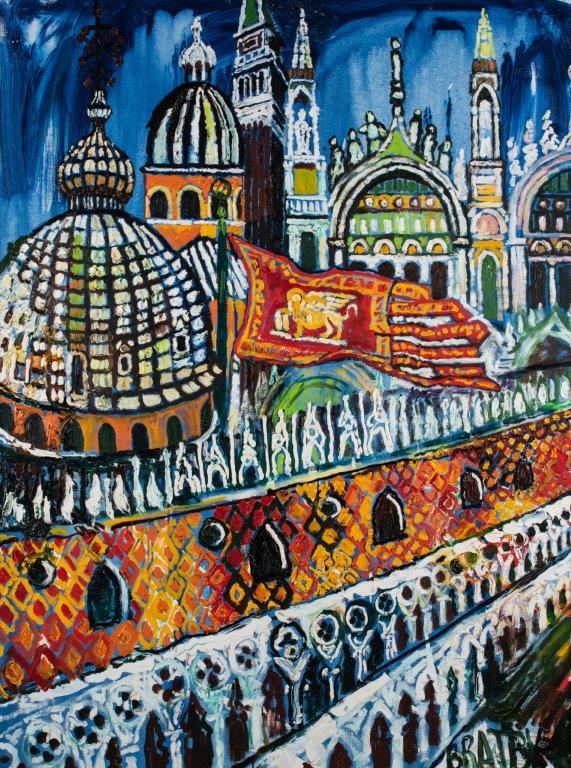 The sale also includes smaller works by contemporary artists Tracey Emin and Maggie Hamblin  g. Two rather unjustly neglected female artists also feature – a ‘Sketch of a Woman’ (estimate £150 – £250) by Catherine Carrington (1904–2004) sister-in-law, and confident of Dora Carrington who was closely associated with the Bloomsbury Group, and Elsie Henderson, later Baroness de Coudenhove, (1880–1967) who was particularly well-known for her animal drawings. Her work ‘Nymphs and Satyrs’ is estimated at £400-£600.

A large group of mainly etchings of sea and riverscapes including scenes of London docks in their heyday, boat repairing yards, barges moored in the River Thames, and coastal views by Douglas Ian Smart (1879–1970), Mortimer Menpes (1855-1939) and Sir Francis Seymour Haden (1818–1910) form a strong section of the sale. An etching ‘Billingsgate 1859’ by James Abbott McNeill Whistler and a portrait of Dasha Whistler (Whistler’s sister) who was also Seymour Haden’s wife by Frederick S Beaumont (1861–1956), also feature.

The auction also comprises photographs of a remarkably impressive scale (largest 1 x 5.25m) of Venice and Venetian life by Tiina Itkonen, Tim Parchikov, Matthias Schaller, and Dionisio Gonzales.  They are being sold for the benefit of Venice in Peril, a UK charity which raises funds for the conservation of at-risk buildings, monuments and works of art across Venice and its islands.

Harry Moore-Gwyn said of the auction: “This is a strongly eclectic sale with good examples of art from across the centuries, showing remarkable value in areas such as early portraiture and British print making.”