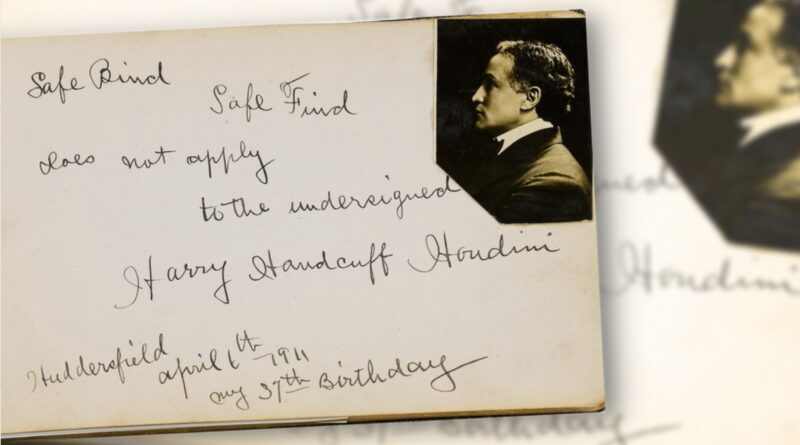 An intriguing signature written by legendary escape artist Harry Houdini when he performed in the Huddersfield Hippodrome is coming up for sale in North Yorkshire Tennants Auctioneers’ Toys, Models and Collectables Sale on December 15.

Written in an autograph book, the inscription and signature read, Safe Bind Safe Find does not apply to the undersigned Harry Handcuff Houdini, Huddersfield April 6th 1911 my 37th Birthday and are accompanied by a small daguerreotype photograph of Houdini pasted to the top of the page.  Interestingly, Houdini claimed April 6 as his birthday, when in fact he was born on March 24; while theories abound as to why this might be, in a letter to his brother he claims that April 6 was the day on which his mother always wrote to him. 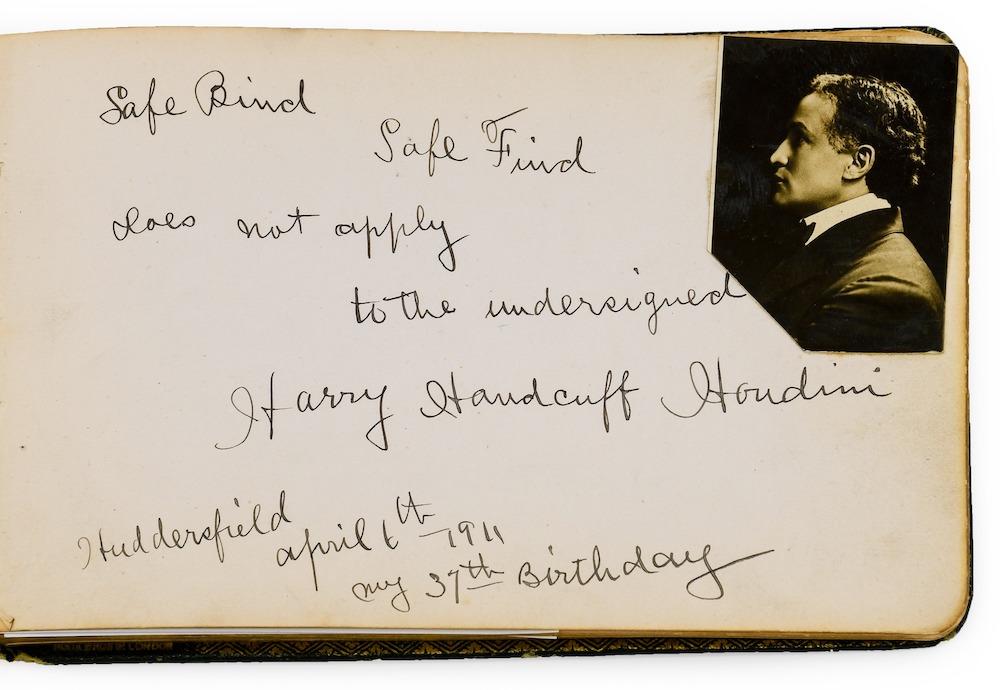 Harry Houdini was born Erik Weitz in Budapest in 1874, the son of a Rabbi. The Weitz family emigrated to the United States in 1878, and the young Houdini first took to the stage as a magician, having taken his name from the French magician Jean-Eugene Robert-Houdin. However, he saw no great success, and began experimenting with escape acts; his popularity soon saw him booked to perform on the vaudeville circuit with his legendary handcuff escape act.

In 1900, he travelled to London and, following a demonstration of his escape from handcuffs in front of the police at Scotland Yard, he was booked to perform at the Alhambra Theatre for six months. Houdini would go on to appear in theatres all over Britain performing escape acts, illusions, and stunts. Frequently he would challenge the local police force to constrain him in cuffs and shackles, hence the inscription, and once he escaped from a barrel of beer from a local brewery in Leeds. Soon his handcuff tricks were widely copied, and he was forced to invent ever-more elaborate acts such as the Chinese Water Torture Cell.

The signature was collected by Sam Crossley, the Stage Manager at the Huddersfield Hippodrome, who was the grandfather of the vendor of the present lot, and his autograph book also contains signatures of a host of other entertainers who graced the boards of the Hippodrome, including George Formby. The autograph book is being sold with an estimate of £600-900.