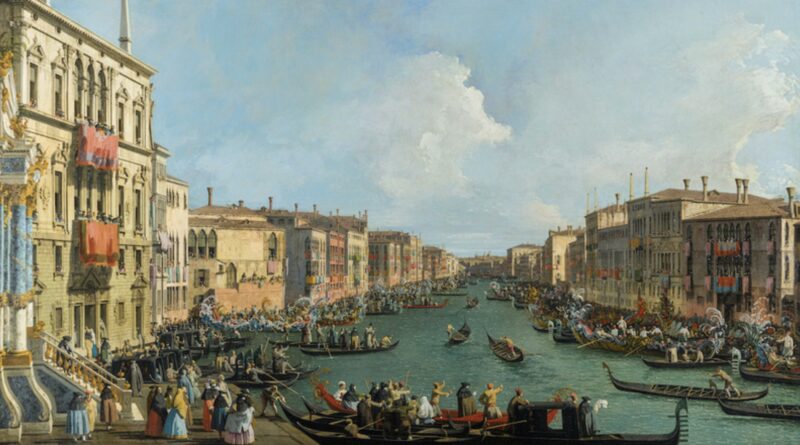 An exhibition featuring Venetian views by the 18th-century Italian painter, Canaletto, entitled Canaletto’s Venice Revisited will open at the National Maritime Museum on April 1, 2022, until September 25, 2022.

The exhibition will display the complete set of twenty-four Venetian views from Woburn Abbey, painted by Canaletto for Lord John Russell, the future 4th Duke of Bedford, in the 1730s.

With canals instead of streets, Venice is defined by its relationship to the sea. Canaletto’s idealised and enduring depictions of Venice in the eighteenth century have led him to be celebrated as a master of the art of view painting. The artworks at the heart of this exhibition record lively and animated evocations of the city’s way of life.

Canaletto’s Venice Revisited will reassess Canaletto at the height of his career, looking beyond the broad views he is famous for to also closely examine the features that bring his Venice to life. The iconic views of Venice rarely change in Canaletto’s work. It is the painstaking detail of the people, their lives, travels and even pets that lend vibrancy to his work. These details highlight how Venetian life revolved around the water that flows throughout and surrounds the city.

This complete collection of twenty-four paintings from Woburn Abbey is thought to be the largest single commission that Canaletto ever received and is still preserved together as a set belonging to Lord John Russell’s descendants. It includes twenty-two smaller views of Venice that depict different aspects of the city’s urban fabric, including iconic landmarks such as Piazza San Marco and the Grand Canal, as well as campi, palazzi and churches. Bookmarking the exhibition will be Woburn Abbey’s two monumental views, A Regatta on the Grand Canal and The Bacino di San Marco on Ascension Day with the Bucintoro returning to the Molo.

These paintings were commissioned as souvenirs by Lord John Russell in 1731, following his visit to the city as part of the Grand Tour. Venice was considered an unmissable destination for English aristocrats on the Grand Tour, an educational rite of passage for the wealthy.

This historical context helps explain some of the stylistic choices Canaletto made in his work. His reputation was built on relatively rapid turnover of breath-taking works of art for Venice’s emerging tourist industry. A single brushstroke, expertly placed, becomes a reflection on the water, or gives a two-dimensional figure shadow and dimension, suggesting life and effervescence in a faceless individual.

While Canaletto’s three-hundred-year-old paintings give the impression of an unchanging and enduring city on the water, Venice today faces urgent threats from mass tourism and severe flooding. In recognition of these threats, Canaletto’s Venice Revisited will look at Venice today, bringing the Woburn series into dialogue with contemporary material. Protest art will reveal how artists today have subverted traditional view painting to emphasise the damaging impact of mass tourism and cruise ships on the city.

The exhibition will conclude with the annual Ascension Day festival, a medieval tradition revived from the 1960s and still performed today, in which a ring is tossed into the lagoon, symbolising Venice’s marriage to the sea. In 2022, this festival will be held in Venice on Thursday 26 May. Even though Venice today has a precarious relationship with rising sea levels threatening its future, the Ascension Day festival is a poignant reminder that the Venetian way of life has always been defined by its enduring relationship with the sea.

Katherine Gazzard, Curator of Art at Royal Museums Greenwich, said; “Canaletto’s masterpieces are not simply depictions of canals and squares. They are extraordinarily detailed portraits of a living city, enlivened with people and boats. The generous loan of this important series from its permanent home at Woburn Abbey provides a timely opportunity to reflect on Venice’s dynamic history and its precarious present.”

Paddy Rodgers, Director of Royal Museums Greenwich, said: “This exhibition reminds us that throughout history, the beating heart of Venice is its relationship with the water that flows through, surrounds and, unless humanity can lessen its impact on the planet, over the city.”