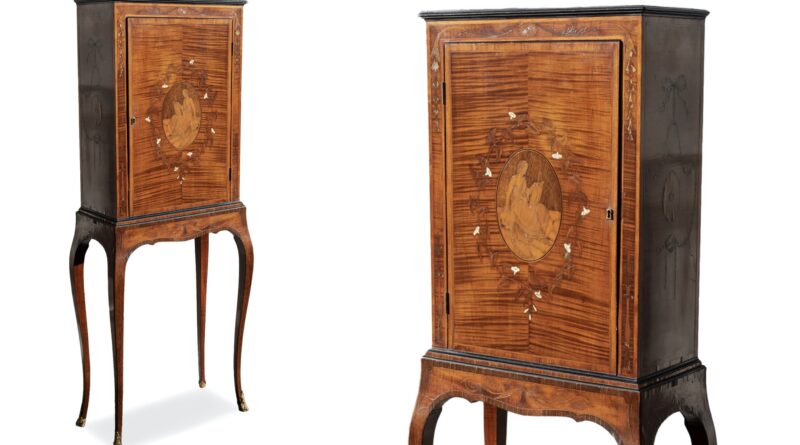 A fine marquetry cabinet believed to be the work of a renowned 18th-century furniture maker could fetch more than £20,000 at auction in December.

The rare piece of furniture has been attributed to John Linnell (1729-1796), a highly regarded designer/maker who was commissioned by some of the UK’s wealthiest families.

The cabinet, described by Charles Hanson, owner of Hansons Auctioneers, as one of the finest pieces of furniture uncovered by the firm, will be offered in their December 7 Fine Art Auction with a guide price of £15,000-£25,000.

Charles said: “We’re fairly sure this important piece of neoclassical furniture can be attributed to John Linnell and his prominent Berkeley Square workshop of circa 1770.  After research it would appear the front panel can be attributed to Johann Christian Linning (1706-1779), a Swedish craftsman who trained in Paris under an important furniture maker to King Louis XV. I suspect the gilt metal feet are made by the firm Matthew Bolton and John Fothergill.”

The marquetry cabinet is veneered in hardwood with an oval panel. It has a contrasting boxwood or holly and partridge inlay with a garlanded leaf surround and is engraved in tulipwood. It is mounted on cabriole legs with ebonised mouldings and has a mahogany frame.

“We are honoured to be handling an important piece of furniture with a real history,” said Charles. “This is furniture craftsmanship at its best.

“We believe the cabinet came from Culham House in Oxfordshire, a property probably built and designed by John Phillips (1709-1775), a lay rector and master builder. There is a similar piece of furniture in Harewood House in Yorkshire.”

The Linnell firm was created in 1730 by William Linnell (c.1703-1763), and was inherited by his son John in 1763. It was one of London’s largest cabinet makers in the 18th century, boasting many important and prominent patrons.

One of John Linnell’s first jobs was to create a suite of furniture for Charles Somerset, 4th Duke of Beaufort’s Chinese Bedroom at Badminton House in Gloucestershire. He was also commissioned by Nathaniel Curzon, 1st Baron Scarsdale at Kedleston Hall, Derbyshire, and made furniture for Osterley Park House in Middlesex.

Charles said: “We thrive on research which allows us to understand the history and provenance of items. This knowledge can add immense value to an item, garner international appeal and, in this case, help an important find achieve its auction potential.