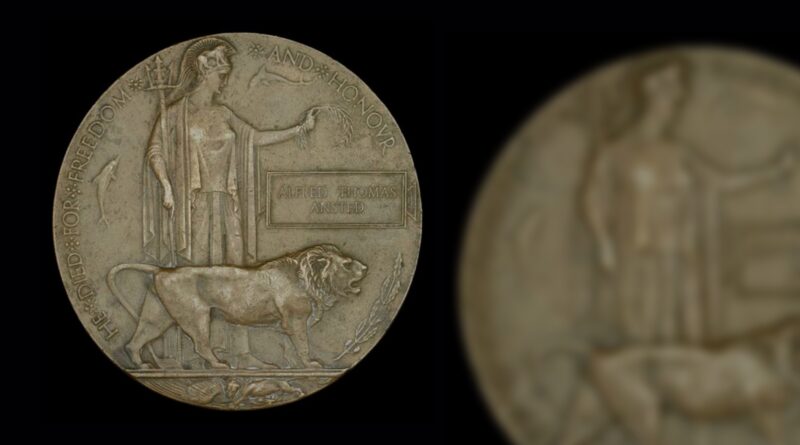 A rare and possible unique memorial plaque to a WWI British soldier who was ‘shot at dawn’ as a deserter, will be offered in a sale later this month.

The plaque to Private A. T. Ansted, who was one of 346 British soldiers to be ‘shot at dawn’ during the Great War,  will be offered by Dix Noonan Webb in their auction of Orders, Decorations, Medals and Militaria on January 26. Estimated to fetch £2,400-2,800, it is being sold by the estate of a deceased collector. 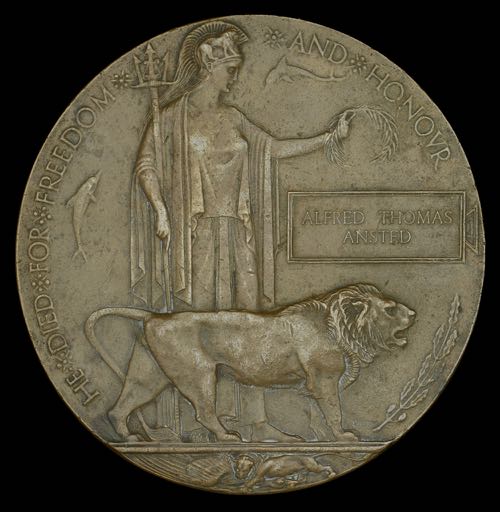 Alfred Thomas Ansted, who was from Northolt, Middlesex, enrolled for the Royal Fusiliers on September 21, 1905 and served with the Colours for eight years, before transferring to the Reserve in 1913. Recalled for service, he served with the 4th Battalion during the Great War on the Western Front from February 9, 1915. He originally went absent without leave in May 1916 and for this received a suspended sentence.

However, he went absent again in August 1916 from Guillemont on the Somme and two months later handed himself in to the Military Police at Corbie. During his trial he claimed to have been ‘unnerved by shellfire’. Found guilty of cowardice, he was summarily executed by firing squad on November 15, 1916, and is buried in the Bertancourt Military Cemetery, France. He was 29-years-old.

Christopher Mellor-Hill, Head of Client Liaison (Associate Director), Dix Noonan Webb commented: “With the help of one of our expert cataloguers, we are amazed to have identified this possibly unique Memorial Plaque to a WW1 ‘shot at dawn’ deserter. All deserters automatically forfeited their medal awards, including Ansted, as a result and we believe that this Memorial plaque to him was issued in error, as we don’t know of any others that were given to any of the 346 ‘shot at dawn’ men. It certainly represents a very emotive aspect of our WW1 history for which these men were pardoned in 2006 and are now commemorated at the National Memorial Arboretum in Staffordshire.”

The issue of Memorial Plaques to deserters is uncertain. He continues: “ The official line seems to be that those who were executed, at least, would have forfeited both medals and the right to a Plaque as well as their pension. Certainly in this case, although Ansted has a Medal Index Card showing initial entitlement to a 1914-15 Star trio, both the 1914-15 Star roll and the British War Medal and Victory Medal roll clearly state ‘No Medal – Shot for Desertion’.

Similarly, his entry in the Army Register of Soldiers’ effects shows, under ‘war gratuity’, just the words ‘not admissible’, and his ‘Dependant’s Pension’ card reads ‘Refusal’. However, as this plaque bears a unique name it seems that in this case at least a plaque was officially issued. Whether that was through an administrative error, upon request, or for another reason is not known. Certainly this was the exception rather than the rule, and consequently this plaque is extremely rare, and may well be a unique issue to a soldier shot at dawn during the Great War.”