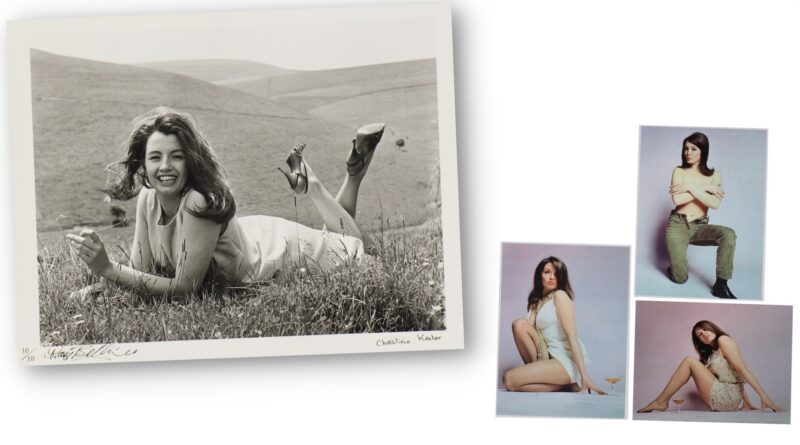 Candid photographs of Christine Keeler, the 19-year-old model whose affair with the MP John Profumo caused a scandal in the 1960s are some highlights of an upcoming and unusual sale in Essex. 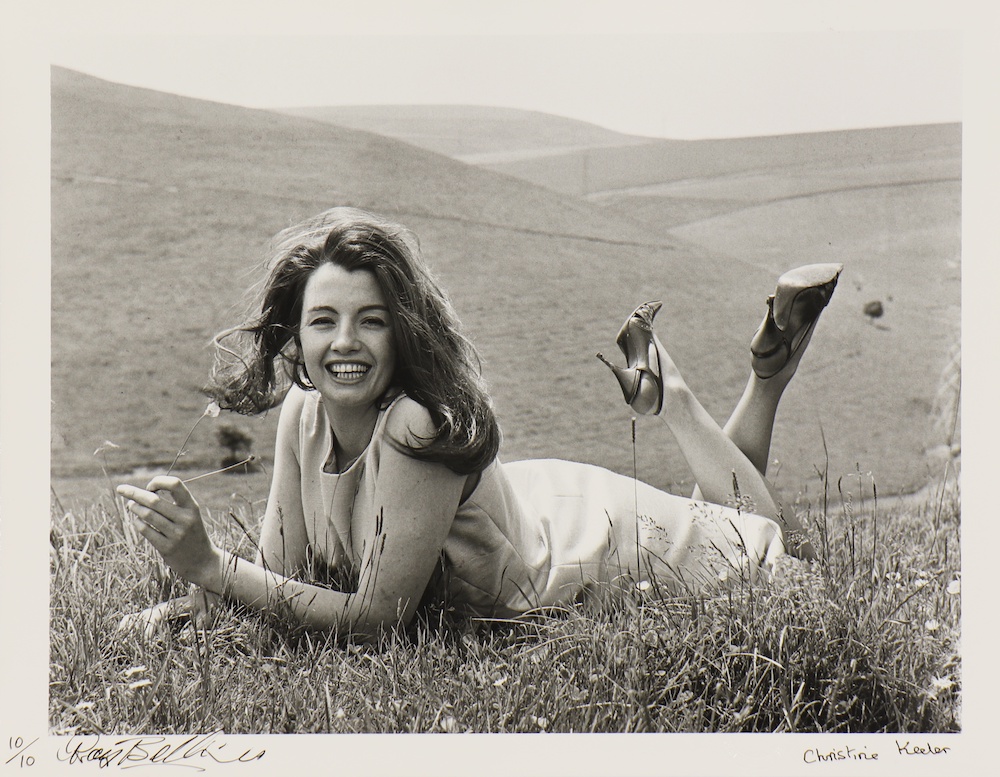 While political scandals come and go today, back in 1963 when it emerged that John Profumo had lied to the House of Commons regarding an extramarital affair with the 19-year-old model Christine Keeler, the nation’s faith in the ruling classes was shaken to its core. The credibility of the Macmillan government was severely damaged and the fallout contributed to the Conservative government’s defeat the following year. The relationship between politicians and the public was never quite the same again.

Almost 60 years later and dramatisations of the ‘Profumo Affair’ continue to appear on stage and screen. Interest in Keeler and the showgirl Mandy Rice-Davies has seldom subsided. 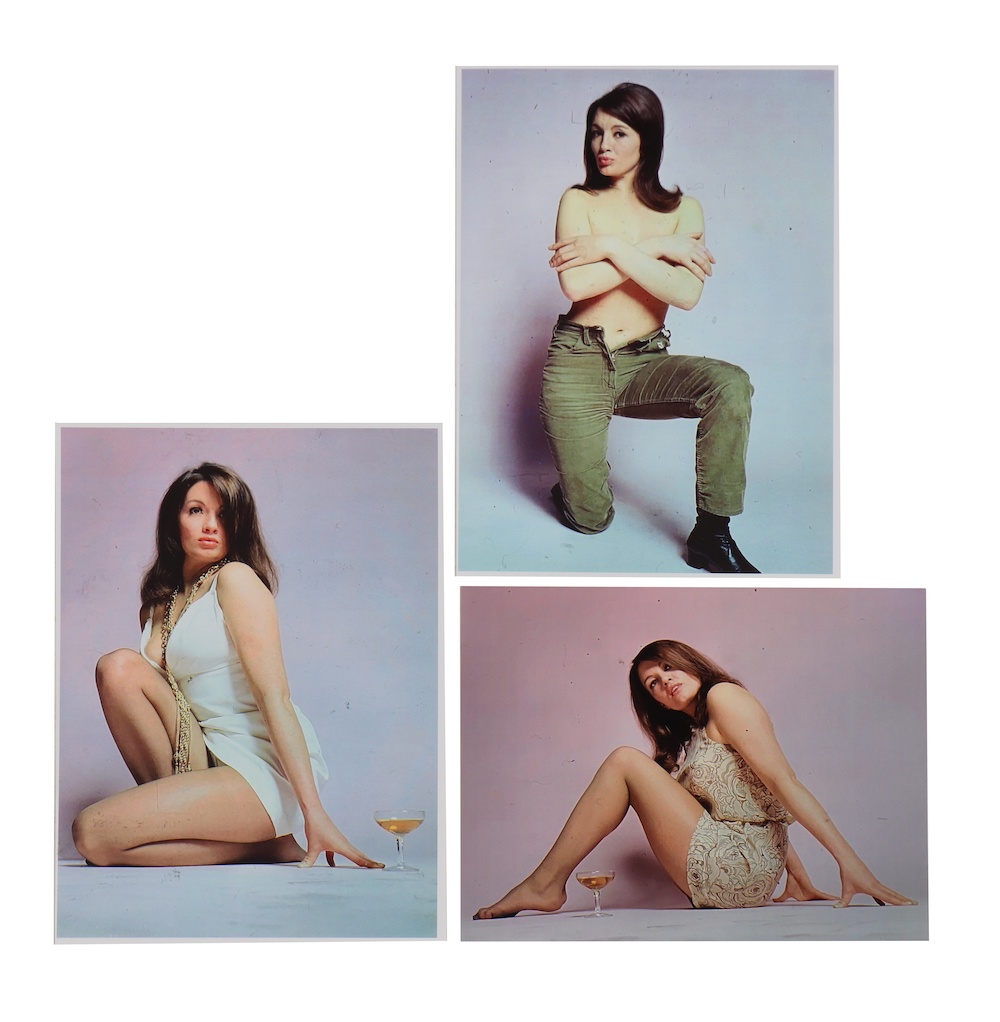 Sworders’ Out of the Ordinary sale on February 15 includes a series of candid photographs of both Keeler and Rice Davies taken at the height of their notoriety. A rare nude studio photograph of Mandy Rice Davies was taken by an unknown photographer sometime in the early 1960s. At the time the showgirl from Llanelli was mixing in surprisingly important social circles, enjoying the company of Lord Astor at Cliveden. Famously, when challenged in court whether she knew that Lord Astor had denied having sex with her. She replied: “He would, wouldn’t he?”  The photo, originally purchased from the estate of the late actor Peter Wyngarde, is guided at £500-700.

For her role in the labyrinthine events of the Profumo Affair, Christine Keeler was sentenced to nine months imprisonment for perjury. A series of photos in the sale were taken by Ray Bellisario (1936-2018) on the day she was released from Holloway prison in June 1964. The original negatives were purchased by the vendor in 2013 when a series of silver gelatin prints were made in an edition of ten, all signed by Keeler. ‘Freedom – Laughing’ and ‘Freedom – Mini car’ are expected to bring £400-600 each, while ‘Freedom – First Day Out Of Prison, Lying In A Field’ (Full Length) is guided at £800-1200. A group of three glamour photos by unknown photographer, including one of the model topless, is expected to bring £400-600. The original negatives for these prints are held by the Christine Keeler family archive. 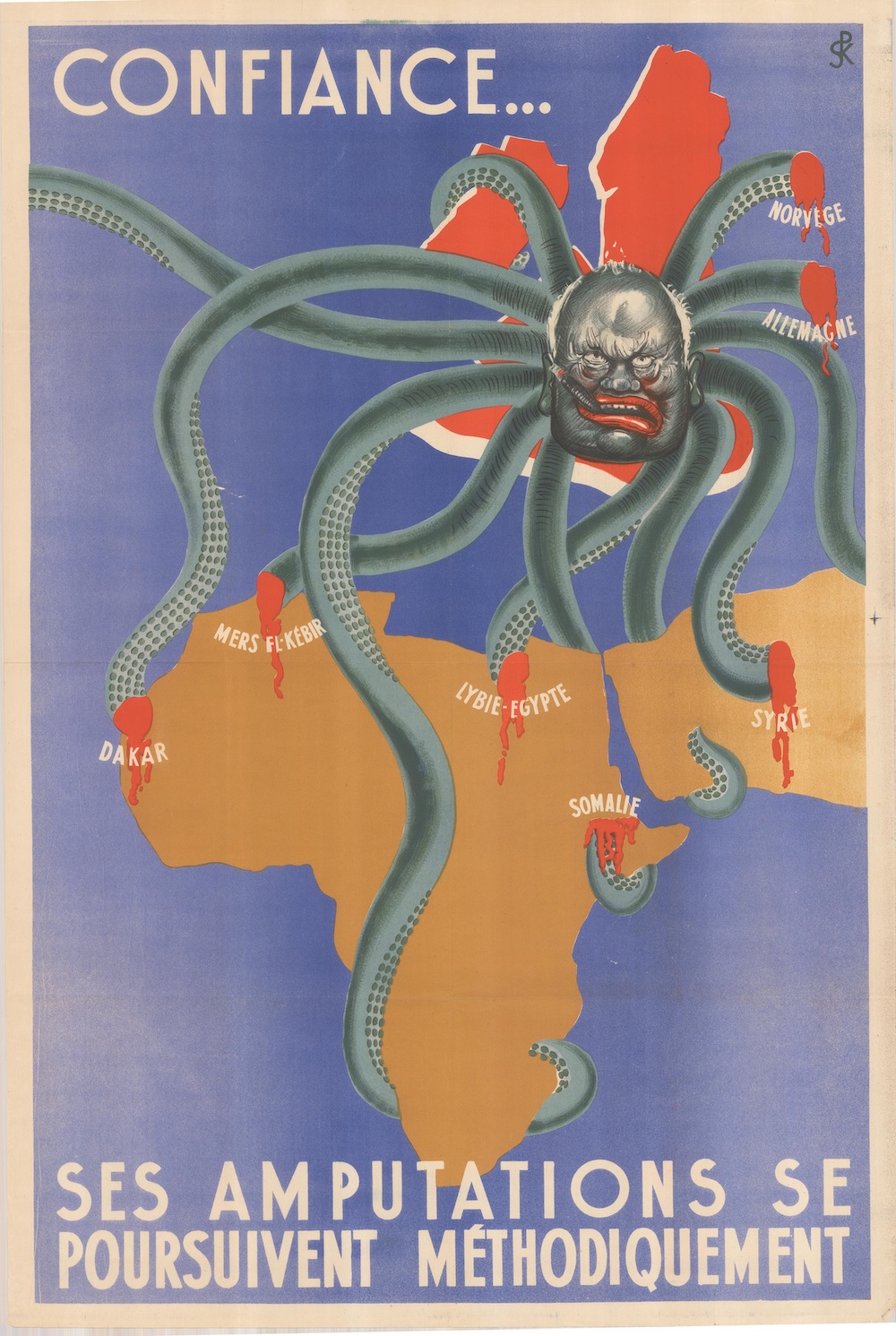 Elsewhere in the sale, a chromolithograph propaganda poster published in occupied Paris by the Vichy government in 1942 is guided at £4,000-£5,000. Signed with monogram of the artist ‘SPK’, it depicts Winston Churchill as an octopus with its tentacles representing British military intervention in the Middle East and Africa. The text reads: Confiance… Ses Amputations Se Poursuivent Methodiquement (Have Faith – The Systematic Amputations Are Continuing). The cutting of these tentacles reflects the thwarting of British actions in Norway, Germany, Syria, Somalia, Libya, Mers el Kebir and Dakar by Axis forces.

Two puppets from the private collection of Terry Curtis, one of the original sculptors working for Gerry Anderson in the 1960s, also feature in the sale.  The puppets of Captain Grey, a character from Captain Scarlet, and The Atlantian, the lead ‘actor’ in an abandoned Anderson show, are estimated at £4,000-5,000 and £8,000-10,000 respectively.

The character of Captain Grey – invited by Captain Scarlet to join Spectrum- was loosely based on Sean Connery’s portrayal of James Bond. Although a modern reproduction this puppet has been made according to the same methods and standards as the original 1960s puppets. The one difference is that each modern reproduction is micro chipped as an invisible signature of authenticity.

The Atlantian is original puppet from an unrealised project that was  based around a family living in Atlantis, with the power to teleport to Earth and help people in distress. With the show never making it into production (the script was ultimately abandoned in favour of the live action show UFO) the puppet remained in its case with Curtis, making a brief appearance on the Antiques Roadshow around the turn of the millennium. 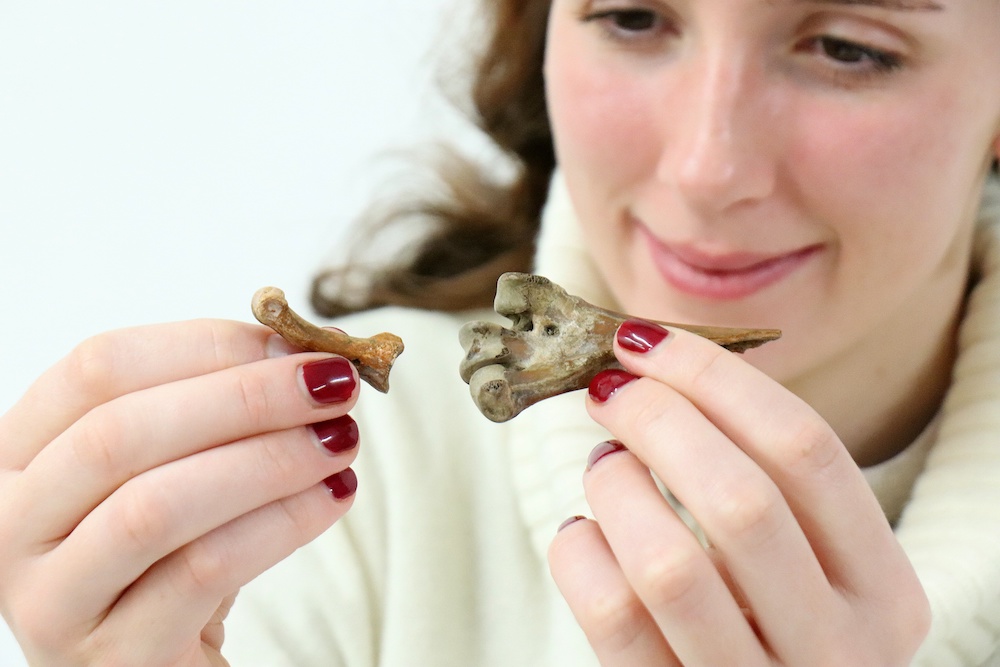 Bones from the most famous of all extinct birds will also be offered in the auction, with the femur and phalanx bone from a dodo, the flightless species that died out in Mauritius around 330 years ago, expected to bring £3,000-4,000. The dodo bones on offer – a 7.5cm leg bone and a 4cm toe bone – are from a group of dodo bones discovered in 1885 during the investigation of the Mare aux Songes swamp in Mauritius by local schoolmaster George Clarke. Hearing that a few old dodo bones had been found in this area, Clarke hired local servants to wade through the mud and feel for further bones with their feet. 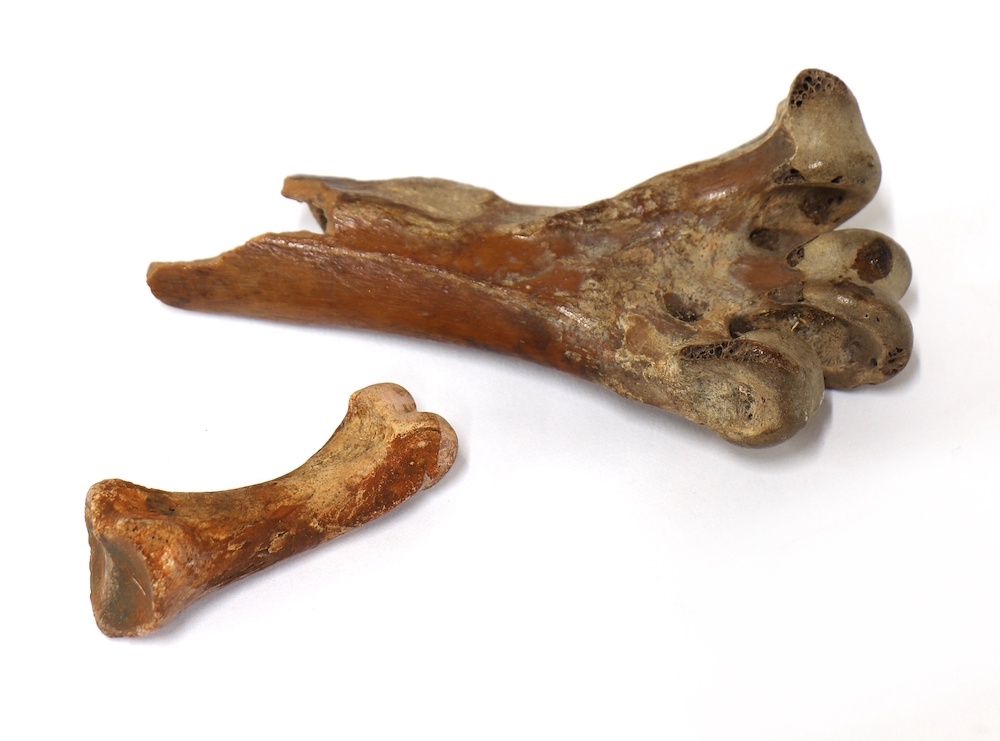 Just in time for pantomime season, the sale has an unusual souvenir relating to Richard ‘Dick’ Whittington (1354-1423) – a mummified cat. The story goes that his macabre survivor was found in 1949 when an unsuccessful attempt was made to find the tomb of the real Dick Whittington. The three times mayor of London is known to have been buried at St Michael Paternoster Royal, College Hill although the old church was destroyed during the Great Fire of 1666 and rebuilt by Sir Christopher Wren. 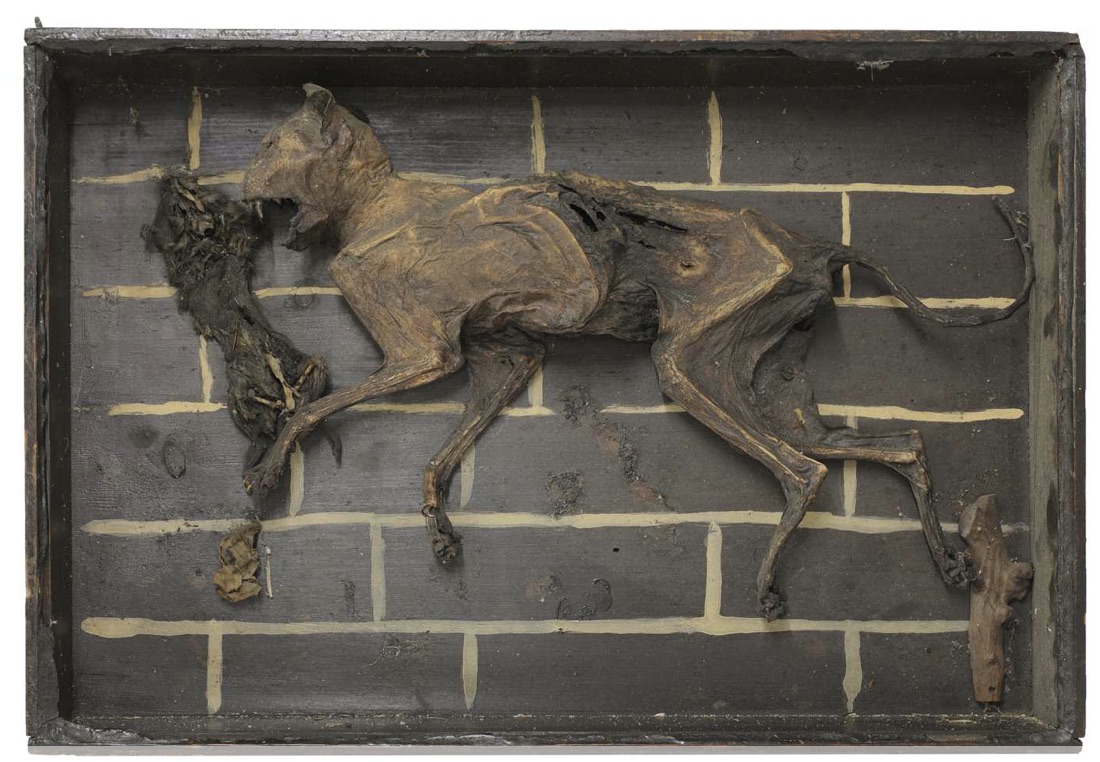 Mummified cats were a common feature of medieval buildings: they were incorporated in the foundations of a building to ward off evil spirits and bring good luck to the inhabitants. This example, that may indeed be from Whittington’s time, was on display at the Whittington & Cat public house on Highgate Hill, London – and featured in the television program ‘Living Legends’ with Magnus Magnusson in 1979 – before it was given to the vendor by the landlord.