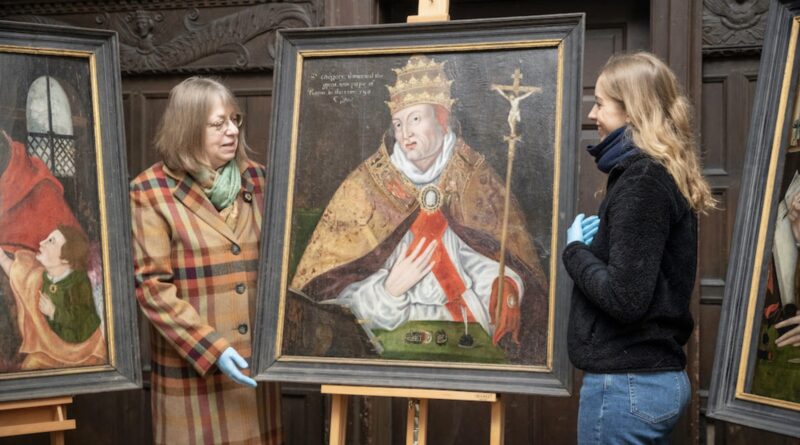 A set of three fragile paintings, thought to have been commissioned around the time of the Gunpowder Plot, have been conserved by the National Trust and returned to their Oxfordshire home after five years of painstaking work.

However, a mystery still remains about the location of the fourth painting in the set.

The paintings, showing three early Saints of the Catholic Church, have just returned to display at Chastleton House in West Oxfordshire, a large Jacobean manor house built between 1607 and 1612. The paintings are thought to have been hung in the house since it was built.

A programme of conservation to treat all the paintings started in 2017. Conservators had to tackle damage left behind by woodworm in the oak panels, as well as splitting of the boards making up each panel. Detailed analysis of the materials and methods used has uncovered some of the history of the paintings – but a number of questions remain unanswered.

The subjects of the portraits are part of a group of early Christians referred to as The Fathers of the Church. Originally a set of four, the surviving three paintings show three Catholic saints: Pope Gregory I; Saint Jerome; and Saint Augustine Bishop of Hippo.

However, a fourth painting of Saint Ambrose, a fourth century theologian and Bishop of Milan, is missing. A magazine article in 1919 noted the four paintings as a set so while it is thought to have hung in the house until the early 20th Century, nobody knows where it is now.

“It is a mystery,” said Ruth Peters, Senior Collections and House Officer at Chastleton. “We have an idea of what it would look like as the paintings are based on – but are not an exact copy of – a set of four Flemish engravings. The last members of the family to live at Chastleton before it came into the care of the National Trust have no memory of the fourth painting. It might have been sold or given away and so could be hanging on somebody’s wall, unrecognised.”

Another mystery is why a set of paintings of four Catholic Saints were hung at Chastleton at a time when Catholics were prevented from practising their religion.

Ruth explained that the estate had links to the most notorious Catholic rebellion. “The estate was owned by Robert Catesby, infamous for masterminding the Gunpowder Plot of 1605, a Catholic conspiracy to blow up Parliament and kill the protestant King James I. He had sold the estate three years earlier to Walter Jones, a lawyer whose family had gained their wealth in the wool trade.”

Catesby lived on at Chastleton until his execution in 1605. Jones then demolished all the structures and between 1607 and 1612 built the large manor house which stands today.

But despite those links, Beverley said displaying paintings such as the Fathers of the Church was not necessarily a sign of religious protest.

“We don’t know a lot about Walter Jones or the intended use of the paintings at the time, but religious works hanging in the domestic homes were not always symbols of recusancy. The ‘Fathers of the Church’ may have innocently been seen by the family as historical figures. Religious images were officially banned from churches, but not necessarily the home and images were allowed if used as teaching devices – but not for worship.

The conservation work, which included funding from the Getty Foundation panel painting initiative for Saint Augustine, included a full technical analysis of all three paintings undertaken at the Courtauld Institute of Art’s Conservation Department which has helped to understand the early history of the paintings.

It is thought that the paintings were produced in Britain in the late 16th or early 17th century with pigment analysis showing colours which were all available at the time. Dendrochronology – an analysis of tree rings in the timber boards – found that several of the panels are from the same tree, a Worcestershire oak felled in about 1563, possibly from the clearance of the Wyre Forest. But there were also clues that the timber had been recycled, possibly from furniture, perhaps a table or a chest of drawers, so were likely painted some years after the tree was felled.

However, despite detailed analysis and research, it has not yet been possible to identify who painted the three portraits.

Rebecca Hellen, the Trust’s Senior National Conservator of Paintings said: “We believe they were painted by native English or Anglo-Netherlandish artists. Sets of paintings were often worked on by artists and their assistants together. There had been a substantial influx of painters from the Netherlands initially into London and then other parts of the country. While the paintings stylistically share many qualities with contemporary English paintings, they also have qualities of Anglo-Netherlandish artists.”

“Portrait sets such as this and painted decorations set into carved panelling became popular from around 1590. They are an important set, not least for their history as part of Chastleton House and it is wonderful to have them back in such good condition.”

Chastleton House is known for its worn look and dusty patina, it is presented as it was found by the National Trust rather than how it looked in its heyday. One important consideration was to ensure the focus was on preserving the paintings as opposed to restoring them back to their original appearance, so they did not look out of place at Chastleton.

The Trust’s experts worked closely with the team of conservators supporting decisions as the losses were in-painted, while still acknowledging the levels of damage and keeping the final conservation looking just right for the property.

Although the puzzle over what happened to Saint Ambrose’s portrait remains, the three others from the set are now back on display at Chastleton.