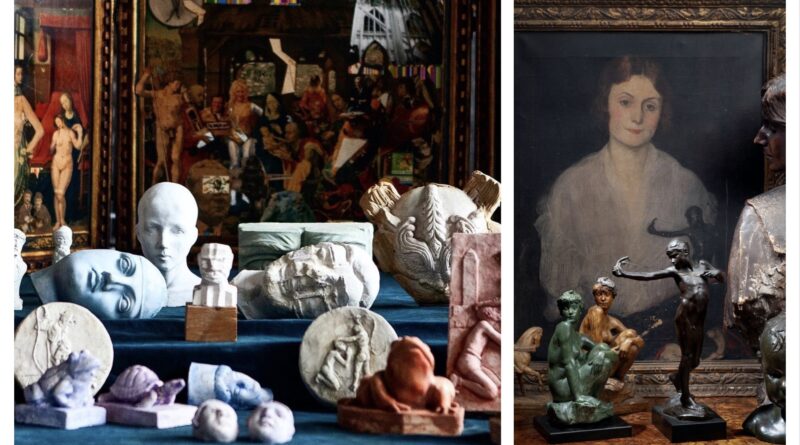 Consigned for sale directly by his grandchildren, the collection has been in the family since they were made and includes a number of his working models or ‘maquettes’.

Sir William Reid Dick was arguably the most famous sculptor in Britain in the 1920s and 1930s; he sculpted the King and Queen and Winston Churchill. For many years his work fell out of favour as he was hidden in the shadow of the great modernist masters like Henry Moore and Epstein, and his more figurative sculpture became unfashionable. However, more recently; his work and that of the New Sculpture artists, is enjoying a revival in popularity. This is demonstrated by the bronze figure by Alfred Gilbert that sold for £1 million hammer at Bonhams in 2020.

This collection of works also includes photographs of the sculptor, as well as paintings, and two of the family paintings show his most famous work, ‘Sling Boy’. Of particular interest is the maquette of Lady Godiva, which although in poor condition, is obviously an early design, before his patron and the officials at Coventry Council forced him to adopt a much more conventional style.

Elsewhere is another very interesting and potentially unique work; a portrait of the sculptor’s wife, with a very abstract base and a modern feel to the portrait, estimated at £2000-£3,000. Both lots are shown in the photograph above.

The sale also excitingly features The Eduardo Paolozzi collection which comprises 23 lots of sculpture and a collage, which has been consigned by Visionary artist Cathy Ward.

Ward has exhibited internationally since the 1980’s; she studied at the Royal College of Art, London from 1986-88 under Eduardo Paolozzi and subsequently worked for him, producing sculptures which were later cast and reused in his works. She was given this collection of works as payment for the casts that she made for him. The most significant work is Triptych, which is unrecorded as it has been in her personal collection since the 1980s, seen below.