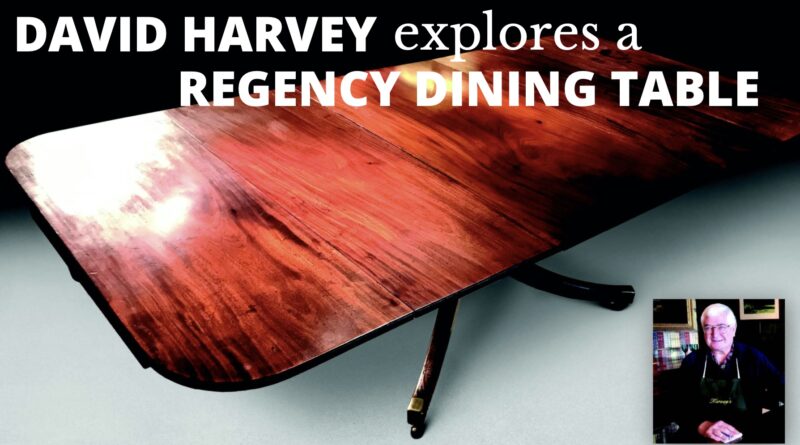 David Harvey praises the ingenuity of Regency cabinetmakers, including one of the best – William Pocock

By the start of the Regency period, British cabinetmakers had become extremely skilful in producing an extraordinary range of mechanical and metamorphic furniture, much of which was patented and simply described as “patent” pieces.

The gadgetry was driven by the Georgian thirst for originality, seen in the new “museums of curiosity”, as well as the newfound ability to travel – whether for military reasons or as part of the Grand Tour – both serviced by increasingly complicated, adjustable campaign furniture.

So my question is: how did we convert a previously rather modest Regency table to the impressive 9ft model above? William Pocock had the answer.

William Pocock (1750-1835) was one of the top echelon of furniture makers working in London during this time, he also advertised his pieces as patented.

The superb dining table is numbered “16” on a brass plaque along with the words “Pocock Patent”. An 1814 advertisement includes pictures of this ”Sympathetic” extending table. One of its main selling points was that its complicated mechanism included a handle at each end which allowed it to be operated by one person.

As well as being a master cabinetmaker, Pocock was inventive, with a terrific grasp of engineering principles. Which is one of the reasons why I was so excited to come across this table.

Everywhere you look you find ingenious devices making this patented table the best he could possibly produce.

There is a telescopic action for the underframe, by turning over one of the end leaves you can see both the brass locator lug and the upstanding dowel which is secured by a hole in the leaf.

Once the leaf is in position, the hinged clasps on the perimeter can be locked into place with the counterparts on the end friezes, so locking the end leaves firmly into position.

The underframe is constructed to allow the extra leaves to be housed within it when not in use. The scoops at either end enclose brass table forks which clamp the table tops together when extended. You can also see how the brass locator points for the end leaves are set on different sections of the extenders so they can only fit the leaves to the frame in a certain way.

In order to make his tables usable by only one person, Pocock used a series of pulleys and capstans as well as a large brass handle at each end to force the extensions to run out concurrently.

The view from underneath shows just how determined Pocock was to get this mechanism to operate fluently. In addition to the ropes and boxwood capstans, he incorporated turned boxwood rollers into the underframe so the mechanism rolled smoothly.

He didn’t stop there, however, as he was determined to have the whole 9ft-long table supported by a single, elegant central column raised on sabred legs.

Looking from underneath again, we can see the strong metal “spider” or braces holding the sabred legs onto the central octagonal shaft. These provide the stability and strength for such a long table and stop the ends from flapping up and down.

The spread of the legs is much wider than one might expect on a smaller table but, of course, it has to provide stability when the tops are fully extended.

Upside down, it is also interesting to note the detailed reeding towards the top of the legs where they join the column.

Notice also how they have been rubbed back by generations of boots and shoes further down the legs. This ties in with the leaves’ reeded edges and is the sort of detail we look for to ensure all of a piece’s elements are original to one another.

In order to ensure the table’s rigidity when in place, Pocock used a series of bolts on the framework to prevent movement between the tops and base – regardless of the number of leaves extended. The bolt seen below locks into a hole in the oak underframe to stop any movement once extended. 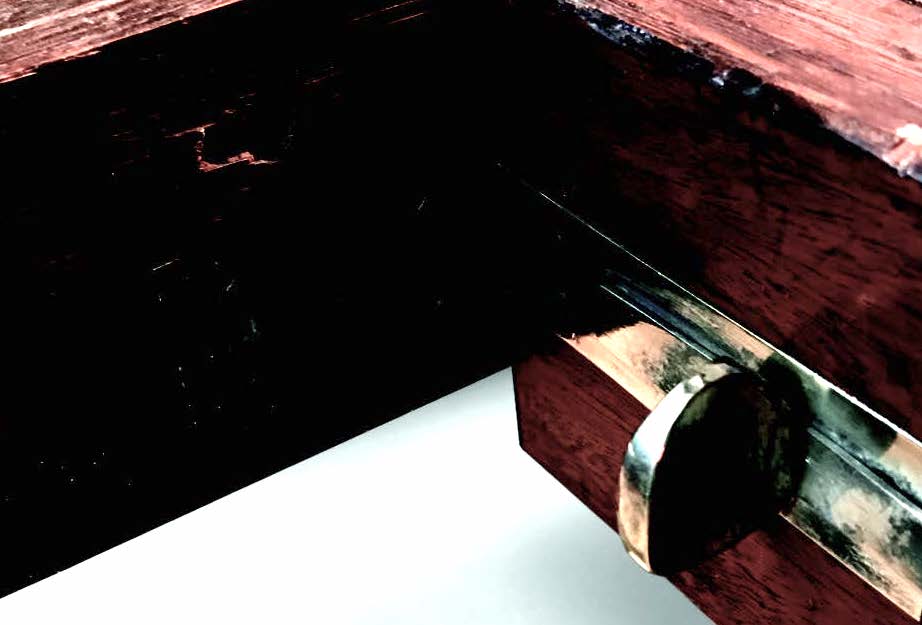 The image below shows not only the quality of the mahogany, but also the large brass handle on each end. Also apparent are the locator hinged flaps hanging from the end leaf, with the brass turn button receivers on the friezes.

This advertisement from 1814 illustrates Pocock’s “Sympathetic” extending dining table that could accommodate 12 people when fully extended.

From 1801 to 1825 he had showrooms at 26 Southampton Street, London where the business is described as a “cabinet and upholstery warehouse”. He was known to have patented several designs, including a reclining chair in 1813 featuring an adjustable back and double footstool that could be extended into a couch.

He also designed library tables with rising tops to suit both a standing and seated posture.