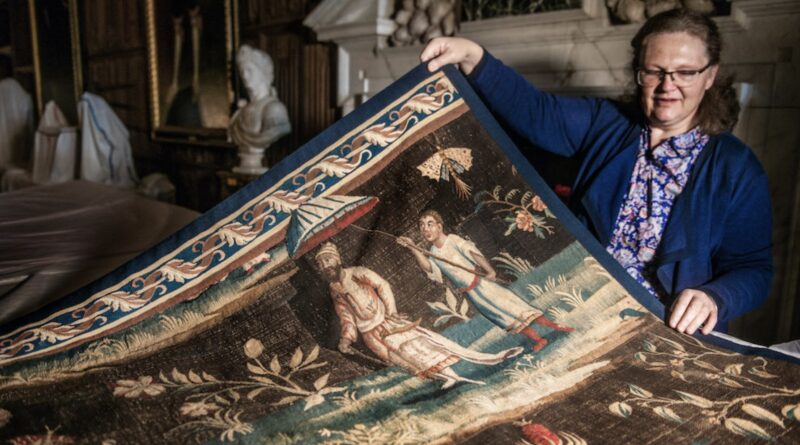 A set of rare surviving tapestries that were once cut up as part of a 19th-century ‘makeover’ are back on show at National Trust mansion The Vyne, in Hampshire, following conservation.

Believed to have been commissioned for The Vyne, the tapestries were created in the early 1700s in the London workshop of John Vanderbank. The leading tapestry weaver of the period, he was the first to introduce the style later known as ‘chinoiserie’ to tapestries.

Fascination with the East was widespread in the 18th century thanks to increased trade. Western craftsmen were keen to mimic the decoration of imported wares and scenes from books of illustrated travel descriptions. The result was a hotch-potch of Chinese, Indian, Japanese and Turkish cultural influences, creating highly fictionalised designs later known as ‘chinoiserie’.

The tapestries clearly reflect Vanderbank’s romanticised and exaggerated European view of Asian art and culture. Monkeys, wild cats, enormous insects and birds are scattered across the textiles. There are beautiful pagodas, groups of figures in flowing robes with musical instruments, and fantastical deities. Set against a rich brown background, the tapestries aimed to imitate the popular imported Japanese and Chinese screens whose vibrant designs were carved into black lacquer.

The Vyne’s senior collections and house officer Dominique Shembry explained: “We may think that recycling and adapting what you have for a new decorative scheme is a modern concept, but back in the 19th century, The Vyne’s financially squeezed owner Wiggett Chute cut up these sumptuous tapestries that were already well over a hundred years old, to line the walls of his new billiard room.

“Wiggett wanted a cosy space to escape to, away from his eleven children, and with the tapestries added, the billiard room became a more inviting place to relax in. And they certainly provided an atmospheric backdrop to the room’s dark panelling and imposing fireplace. However, in doing his makeover Chute managed to mis-match some sections to make them fit, so you’ll see half a bird for instance, and the end of a pagoda is missing.”

The tapestries were removed eight years ago for safekeeping by the National Trust when a succession of violent storms saw water coming through the roof and windows of this former Tudor ‘power house, threatening to damage the tapestries.

However this presented an unexpected opportunity to examine the textiles more closely, revealing their fragile state caused by failing historic repairs, degrading silk and wool yarn, and warped backings that were putting a strain on the fabric.

Conservation work could not begin until 2018, after £382,000 had been secured for the project including generous public donations, and a huge £5.4 million programme to repair The Vyne’s leaking roof was nearing completion.

Conservators prepared the textiles for ‘wet cleaning’ in Belgium, where a mist of water and mild detergent would be drawn through the historic fabric to remove any dirt. Before washing, old stitched repairs that might shrink and put additional stress on the tapestries were removed. Weak and open slits were reinforced with temporary extra stitching and small samples of yarn tested for colour fastness. The linings and narrow woven borders, known as galloons, were also removed and the tapestries gently surface vacuumed to remove any loose soiling.

Once back in the UK, the tapestries were sent to three specialist conservation workshops, including the National Trust’s Textile Conservation Studio in Norfolk. The complex process to improve their appearance and strengthen them took three years.

Senior textile conservator Rachel Langley added: “We mounted the tapestries onto frames so that we could stitch through them. The three we worked on took over 3,000 hours of conservation stitching, but they are so quirky and charming there was always something to enjoy. One of the images I particularly loved working on was of a little carriage being pulled by a leopard.”

The re-hanging process took a team of expert conservators several days, with help from museum-grade velcro®.

Rachel Langley continued: “Historically, tapestries would have been hung on hooks, but in fact velcro® is a much better option because it evenly distributes the weight of each tapestry, and you can easily make adjustments once they’re up on the walls.”

The Vyne’s general manager Stuart Maughan concluded: “It is recorded that Wiggett’s sister Caroline, as a child, had been terrified of one of the characters in the tapestries when they had hung in her bedroom, requiring her nurse to stay with her at night until she fell asleep. We rather hope our visitors will have a different reaction to them!

“We are delighted to have the tapestries back with us after all these years. They’re such an amazing and beautiful mix of different cultures, and they mark a significant historic moment in the development of today’s globalised world. We hope many people will come and enjoy them.”

The tapestries will be back on show from Saturday 26 March.