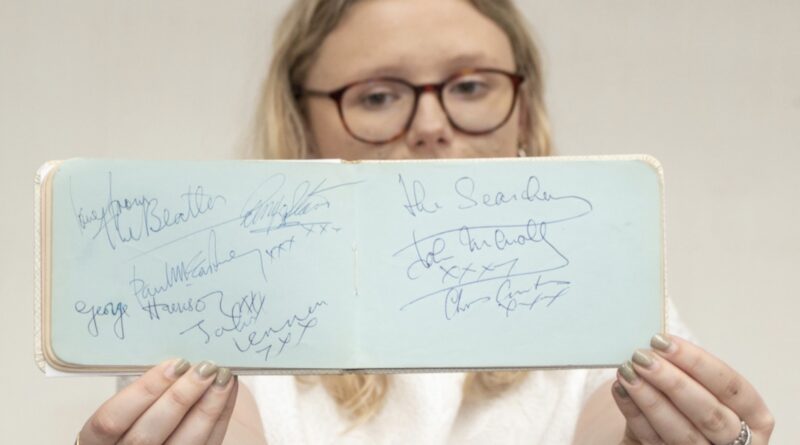 A set of Beatles autographs – complete with John Lennon’s fish-and-chip-fat finger smudge – could sell for thousands of pounds at auction.

A nervous teenage schoolgirl bagged the star signatures at a canteen in Birmingham in 1963 when the Fab Four were tucking into a chippy lunch. Consequently, George Harrison’s autograph includes a greasy smudge on his first name.

The autograph book, which contains many other names from the 1960s music scene, is set to go under the hammer at Hansons Auctioneers on June 15 with a guide price of £4,000-£4,500.

The seller, a 73-year-old retired teacher from Kenilworth, said: “I was really, really lucky – and privileged – to get those autographs that day. I remember absolutely everything about it all. It was a lovely summer’s day 59 years ago.

“I was only 14 at the time. My friend’s mother worked in the design department at the ABC Weekend Television Studios in Aston, Birmingham, and the Beatles were filming there on June 23, 1963. They were in the city to pre-record a performance for TV show Thank Your Lucky Stars which was broadcast on June 29, 1963.

“My friend’s mother arranged for us to go backstage. We walked into the canteen and there they were – The Beatles! It was pretty quiet. No one was bothering them. I suppose people had been told to leave them alone. They were queuing up at the food counter and they all plumped for fish and chips. 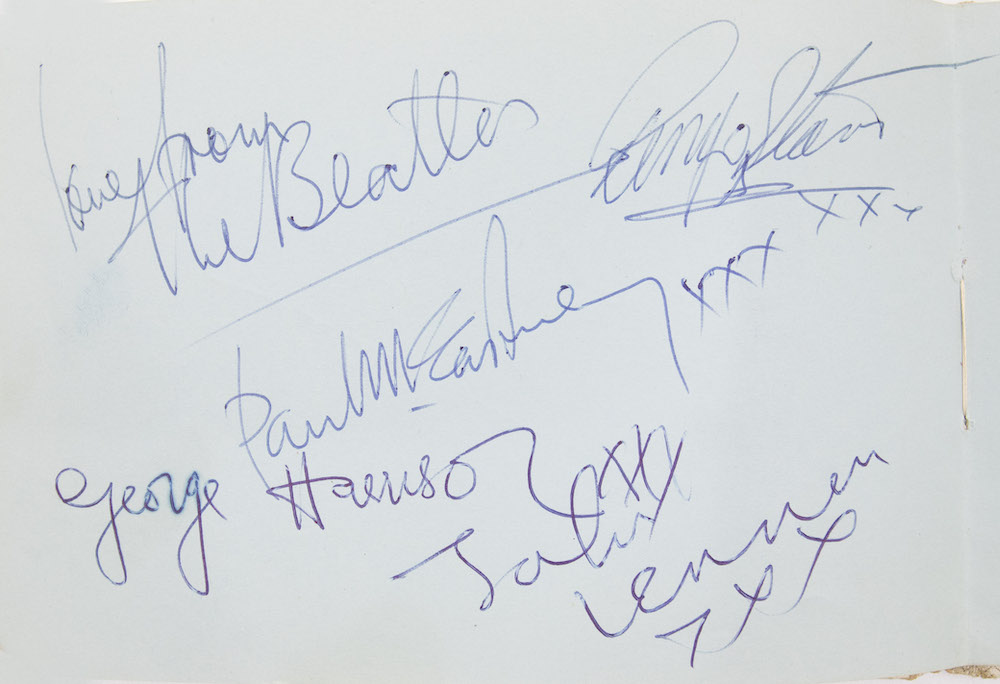 “We were very nervous but managed to pluck up the courage to approach them. I went over to Paul McCartney first and wished him happy birthday. His birthday’s on June 18, which was a few days earlier.

“He signed my autograph book first, wrote ‘love from The Beatles’ and passed it round the table. John was the last to sign. They’d been picking up chips with their fingers and I remember him licking his lips and rubbing his fingers on his trousers to try to get the grease off before he signed. He still put a greasy smudge on George Harrison’s name. It was one of those old blotchy Biros. I suppose the inky smudge contains John Lennon’s DNA.

“They were all so lovely to us, chatty and kind. It was very early days for The Beatles so perhaps the novelty of signing autographs hadn’t worn off. We could hear loads of screaming girls outside the window of the canteen hoping for a glimpse of them. We watched the band perform for the show and you couldn’t hear the music because there was so much screaming going on in the audience.

“On the same day we bumped into Brian Epstein walking down a staircase. He was over the moon to give us his autograph – really delightful.

“I’ve treasured the autographs for decades and kept them carefully wrapped up in polythene, usually on a book shelf. They’ve moved house with me many times. I must have shown them to hundreds of people and bored them with my story!

“I am only selling now because my friend, whose mother got us backstage that day, lost her set of Beatles autographs which she got at the same time. I plan to share the proceeds with her. It seems only fair. Without her mother I would never have them. It’s time for someone else to enjoy and treasure them.”

Claire Howell, music memorabilia consultant at Hansons, said: “This is a particularly lovely set of Beatles autographs with a fantastic back story and provenance. They deserve to do exceptionally well at auction.”