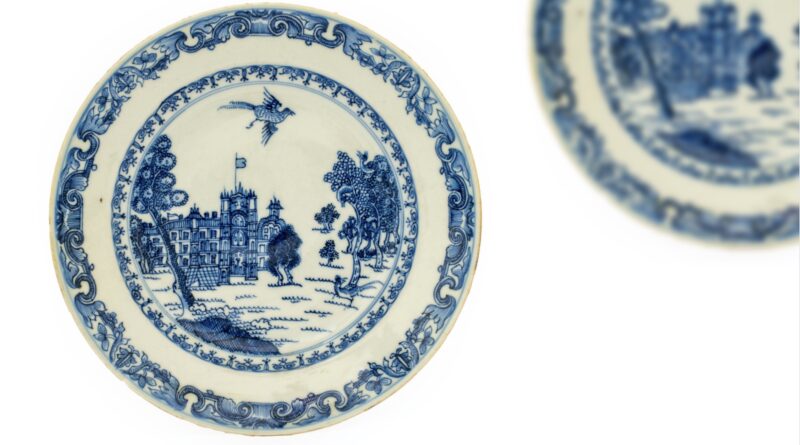 A single-owner sale of ceramics and collector’s curiosities from BBC Antiques Roadshow specialist David Battie will go under the hammer in a North Yorkshire saleroom in July.

Tennants Auctioneers will present the sale that will comprise over 180 lots of academic interest from David Battie’s extensive and important collection on July 15. With an eye for the unusual, the esteemed expert has assembled a fascinating collection filled with rare and interesting pieces.

Highlights of the collection include an unusual Chinese porcelain plate of the Qianlong period, decorated with a European palace or grand country house, estimated at £150-250. Made for export back to Europe, the image would have been copied from a print design sent out to China for a local painter to render onto porcelain; the graphic cross-hatching seen in the foreground is likely taken directly from the print design.

Further interesting export pieces include a Chinese Canton plate, circa 1855, decorated for the Persian market complete with Arabic inscription to the reverse, estimated at £200-300, and a Blanc de Chine wine cup from the second half of the 17th century, exported undecorated to the Netherlands, where the design imitating Japanese Kakiemon pieces was then added. It has an estimate of £200-300.

Away from the ceramics in the sale, a finely made 19th-century cut steel and parcel gilt needlework table clamp is offered with an estimate of £300-400. Sold with its original fitted case, the clamp would have been made for a wealthy lady to hold her needlework steady.

David Battie joined Sotheby’s in 1965 and worked in the Ceramics and Oriental Art Departments before being made a director in 1976. He was a regular face on the Antiques Roadshow for many years and appeared on the show from the first episode, which was aired in 1977. A leading authority on ceramics, and in particular Chinese and Japanese ceramics, David has written numerous publications on the subject.

The collection will be available to view in Tennants’ Leyburn salerooms from July 10 to 14.