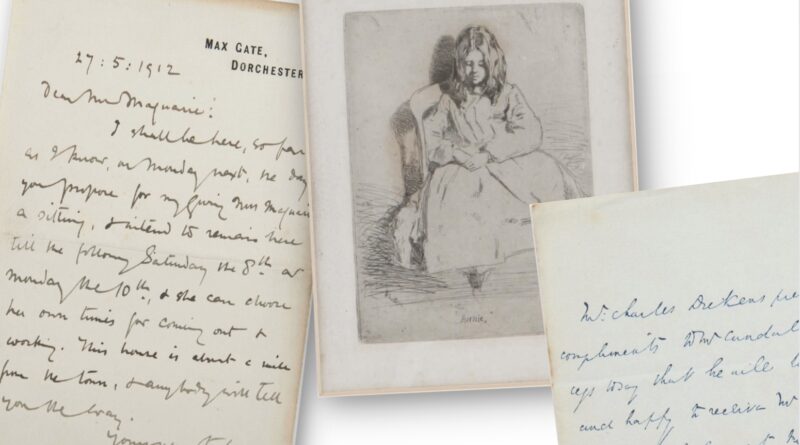 A treasure trove of letters, sketches, books, prints and other artwork from leading artists and writers of the 19th and 20th centuries, ranging from Charles Dickens and Thomas Hardy, to Wilkie Collins and Walter Sickert, will come to auction at Ewbank’s in Surrey on June 23.

Gracie Fields also features among the letter writers, while William Holman Hunt, James Abbot McNeill Whistler, Paul Nash and John Piper are just some of the names among the pantheon of late 19th century and leading Modern British artists whose work and letters also appear.

The extraordinary collection was amassed over decades by the late Ernest Pearce (1930-2012), a member of the Bookplate Exchange Club from 1954 to 1967 and well-known client among the book and map sellers of Cecil Court off London’s Charing Cross Road.

His collection also features a number of rare drawings and sketches by the sought-after 19th century artist Samuel Palmer.

“It’s an exciting and eclectic mix put together by a man of exceptional discernment and taste, who was often in regular correspondence with many well-known artists and fellow collectors from the 1950s onwards, sharing with them his in-depth knowledge and often exchanging rare prints and other works of art,” said Ewbank’s partner Andrew Ewbank.

“The rollcall of artists alone – David Jones, Edward Bawden, Michael Rothenstein, John Northcote Nash and Graham Sutherland, to name a few – reads like a lexicon of British art for the 20th century. And that’s before you have got to the letters.”

The sale creates a very rare opportunity for buyers without the deepest pockets to bid for an item by a top name, as many of the cards, letters, bookplates and drawings have been guided at exceptionally competitive rates.

“The particular attraction of these lots is that so many are highly personal while also displaying the best of the respective artists’ and writers’ talents,” says Ewbank. “They even include beautiful signed woodcut Christmas cards by leading Mod Brit artists like Edward Bawden and John Nash.”

Highlights in the sale include:

The sale is titled The Ernest Pearce Collection. A True Collectors sale: Art, Works on Paper, Books & Correspondence and altogether is expected to fetch £40,000.