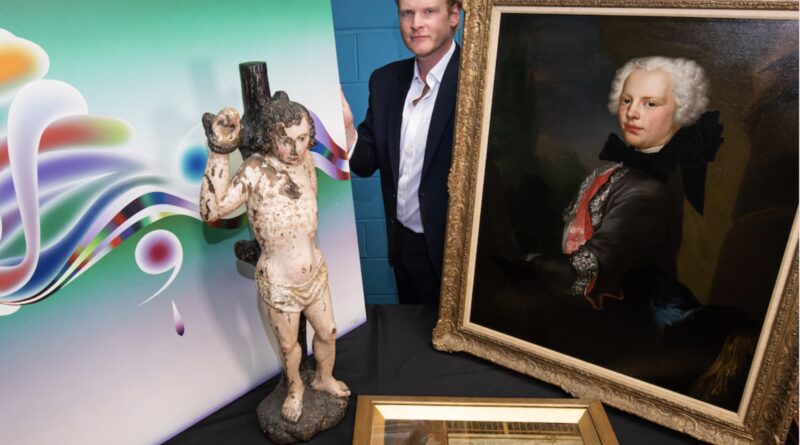 One of the North of England’s leading auction houses is holding its inaugural Pictures and Sculpture sale later this month which showcases a large collection of fine art dating from the 15th century to the present day.

Comprising over 200 lots, the collection has been put together by the auction house’s newly appointed Paintings and Sculpture Specialist Rohan McCulloch and marks the first event of its type in the sale calendar.

“Until now, paintings and sculptures have been included in our Fine Art and Antiques sales but such has been the growing extent and quality of consignments that we have decided to introduce a dedicated auction that will give them their own platform,” said Rohan McCulloch, who has over 15 years’ experience with some of the UK’s foremost auction houses, including Sotheby’s, Bonhams and Lyon & Turnbull.

“I am particularly pleased with this first collection, which has a broad offering of paintings, drawings and sculpture from the last 600 years of British and European Art. There is something to suit all tastes and pockets with attractive pieces valued under a hundred pounds to the work of prestigious artists with price estimates of several thousand,” he added.

One of the lots taking centre stage is an oil painting of hounds by George Wright, the renowned British painter best-known for his equestrian and hunting scenes. Born in Leeds in 1860, George was one of seven children, five of whom became professional artists. Exhibiting at the Grand Central Galleries in New York, the Ackermann’s Gallery in the UK and the Royal Academy of Art, his work is in great demand. Fox Hounds at Rest has been valued at £6,000 to £8,000 and comes from a private collection in Northumberland.

There are also a number of paintings from the Staithes Group. This small North Yorkshire fishing village became a magnet for artists in the 1880s and over the next three decades it became a focal point for over 30 artists who came together in a like-minded manner. Their paintings included rural, domestic and maritime scenes, as well as still life and portraiture.

Amongst those featured is On the Look Out by Fred Mayor, a charming watercolour depicting an old man and child looking through a telescope that carries a guide price of £400-£600. Other Staithes Group artists featured in the sale include Owen Bowen, James William Booth and Ernest Higgins.

Among the more modern pieces of work are two pieces by Stefan Knapp. A survivor of a Siberian gulag, Knapp made his way to Britain in 1941 where he trained with the RAF and became a wartime Spitfire and reconnaissance pilot. After the war, he studied at the Central School of Arts in London and then at the Slade. He is internationally renowned for his monumental projects that transform the meaning and architecture of the buildings they adorn. One of his murals – at Heathrow – consisted of 280 panels and weighed 250 tonnes.