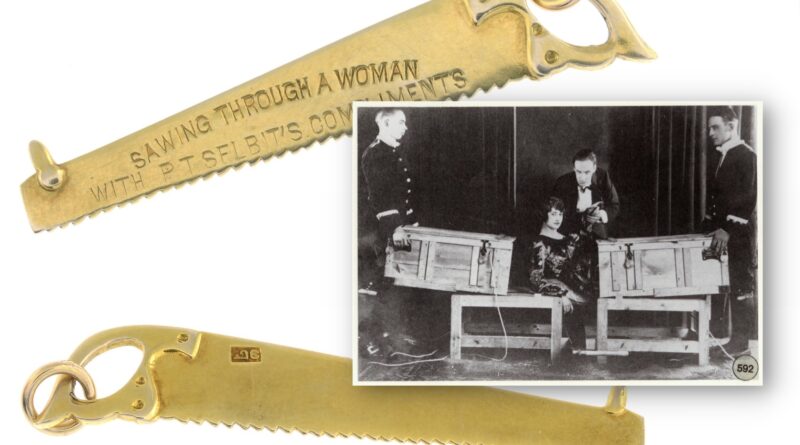 A saw charm given to audience participants of the iconic Sawing Through A Woman illusion will be sold in an auction at Fellows Auctioneers in Birmingham on August 10.

Magician P.T. Selbit originated one of the most recognisable magic tricks in the world. Born Percy Thomas Tibbles in Hampstead, London in 1881, Selbit was apprenticed to a silversmith who leased space to magician Charles Morritt. Here he learnt card tricks and illusions from Morritt’s collection, often studying them while the older man was away. After deciding to write and perform under a pseudonym derived from his own name, he reversed the order of the letters in his surname and removed one “b” to become P.T. Selbit. The most famous illusion act associated with the magician is Sawing A Woman In Half.

Selbit premiered his new illusion at the Finsbury Park Empire theatre in London on January 17, 1921 amid much publicity and scandal, which he courted. He made use of audience volunteers during the act. One such participant was Gladys Eveline Curtis (née Bunce) who was given a little saw charm in 1921 at the Finsbury Empire.

Her granddaughter Eileen tells the story:

This gold saw was given to my grandmother by the Magician P.T. Selbit for “assisting” in his sawing through a woman in half act at his show at the Finsbury Park Empire in 1921. It has been kept by my family ever since.

Members of the audience were invited on stage to help with the act and my grandmother took part.

The gold saw is fashioned as a small charm, with the engraving on it reading SAWING THROUGH A WOMAN WITH P.T. SELBIT’S COMPLIMENTS. Weighing 1.5g. and made of 9ct gold, it is a piece of history – a souvenir of a pioneering magic act that has become iconic. Fellows have entered the charm into auction with an estimate of £30 – £50.

Jewellery auction Manager, Alex Duffy said: “It is always exciting when an unusual item comes through our doors, so you can imagine my intrigue when reading the words ‘SAWING THROUGH A WOMAN‘ on a charm. After the initial concern, learning that this is in fact to commemorate the participation in one of magic’s most famous illusions, I was both relieved and fascinated. Being awarded by P.T. Selbit himself, the magician regarded as the first to introduce this macabre trick to the public, makes it all the more special. We are delighted to offer such a piece for sale and I’m sure the buyers and collectors will share our enthusiasm.”