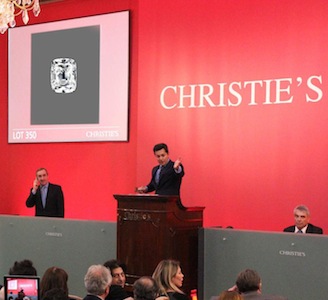 The renowned Archduke Joseph diamond was sold late last night for a staggering $21.5m, a world auction record for a colourless diamond.

The 76.45-carat gem, which takes its name from former owner Archduke Joseph August (1872-1962), was sold to an anonymous buyer at Christie’s Geneva. The diamond, like the famous Koh-i-noor, is believed to have originated from the famous Golconda mines of India.

The diamond’s seller, Alfredo J. Molina, said he was ‘thrilled but not surprised that [it] should have fetched such a high price.’ He explained that it is ‘the finest and largest perfect Golconda diamond ever to appear at auction, with a noble lineage and royal provenance which is literally ‘Fit for a Queen.’

The flawless diamond was the top lot in an auction of Magnificent Jewels that fetched more than $85m, concluding the most successful year for Christie’s Jewellery department in Switzerland.

[gn_note color=”#FAFAFA”]The Archduke Joseph diamond features in Antique Collectors’ Club’s 2009 publication ‘Famous Diamonds’, in which it is described as having ‘all the prerequisites of the finest Golconda diamond: an internal limpidity with ‘D’ colour certification.'[/gn_note]