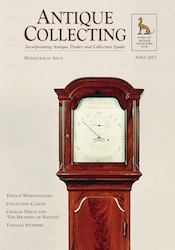 It is very encouraging to find that subscribers are responding positively to our request for e-mail addresses, where they exist. The prize draw is being assiduously operated by Jill Cousens and the list is growing. As yet, however, we have e-mail addresses for only about half our subscribers so would much appreciate getting the information from the remainder, where possible. Communications are so much simpler and quicker digitally than they are by alternatives, so please do make sure we have your e-mail details.

As one who is daily bombarded by e-mail press releases and all kinds of advertising, I can appreciate the desire to avoid the attentions of promoters and publicists, even though they may come from this source. On the other hand, the odd club and professional body I still belong to now communicate with me almost exclusively by e-mail. At the ACC we will always retain the post for those who are outside the digital sphere but as we have remarked earlier, the ether has become prevalent in many matters.

The spectacular sums of money being spent on Impressionist and modern art, mentioned in News & Views this month, continue to amaze anyone involved in the world of collecting. The antiques trade, mostly confined to more accessibly priced artefacts, furnishings and decoration, eyes the art world with jealousy, a fact commented upon by my opposite number on the New England Antiques Journal, John Fiske. There may be some confusion about the overlap at fairs where both art and antiques are included. Going back to the Renaissance, John makes the point that the antiques and art markets are fundamentally different. The former comes from objects that had a function, even if that functionality was tailored to be beautiful as well, so as to convey prestige on its owner. The latter – art, that is – had no material use. The purpose of secular nonfunctional art was to show off the owner’s wealth. This has resulted in making art collectors quite different from antiques collectors. Because antiques are rooted in material function they are connected to the time and place of their creation, whereas art has a universal appeal regardless of its geographic and calendar origin. Once art separated itself from realistic depiction and became an expression of human spirit, whether abstract or otherwise, it became even more universal, whereas antiques are to do with specific locations and timing, meaning that the Chinese, for example, will pay more for Chinese antiques than we will.

Fiske asks whether it is for this reason that art gets so much media coverage and has been included in investment funds more succesfully than antiques. He suggests that no one goes to antiques shows to diversify their investment portfolios or to obtain an expression of universal humanity. They go to find a specific piece of local history. The visual requirements are different, too: an antique is valued for its aged surface and appearance, like patination in furniture, whereas art is cleaned to be as close as possible to what it looked like new. ‘One erases history, the other celebrates it.’

It is interesting that this view can be applied to certain antiques that, by virtue of their designer, move away from the functional realities and local historical identification towards the realms of art. A sideboard by E.W. Godwin, I was advised years ago, has a price more associated with a work of art than an antique simply because its appearance, subtly arranging spaces and solids, tends towards a universal appeal not grounded in specific British origins. One can think of other antiques from other designers, both national and international, that meet this concept too. So there is an overlap – to which Fiske agrees – but it is limited and does not undermine the fundamental differences. Because of its universal appeal, the art market has been punted toward the global funds available, linked to global economics and international investors. Antiques have a more national following. Antique dealers may grumble andeye art dealers with reserve, but they are aiming at much more specific expressions of proud possession.