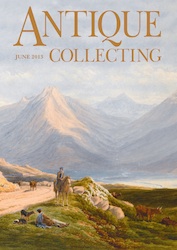 This month is the one in which the big London antiques fairs add their weight to the many smaller ones taking place all over the country. Like the horse racing season, the summer seems to provide a dazzling but all too brief spectacle of finery on display, much anticipated but rapidly completed. It seems illogical that such emphasis should be placed on a few extremely expensive but massively promoted venues, but it has long been the case. Some of the best of stock is held back by dealers anxious to impress at these events. These best pieces are put into peak condition for exhibition at June fairs. Their sale relieves enormous tensions, financial and professional, and is a source of optimism if successfully completed. Pessimism abounds if they fail. Although there are many collectors who feel that buying at fairs means that the purchaser is paying top notch prices so that the exhibitor can cover the enormous costs of such events, there are plenty of examples of shrewd buys at fairs that paid off handsomely not too long afterwards. Fairs are not only for the international spendthrift, careless of cost. They assemble selections that dispense with weeks of search and travel. There are nuggets amongst the rich seams waiting to be mined.

In the last few years an audience harassed about the status of antiques has watched the June fairs with anxiety. In the main their fears have been allayed because as we have often observed, the top end of the market continues to set new records and to be supported by the wealthy. This is true of art more than antiques, especially furniture, which has been left way behind by, for example, the recent vogue for Chinese artefacts. It was particularly ironic that at a sale by Mitchells of Cockermouth a price of £12,000 achieved for a Regency mahogany dining table was hailed as a success despite its having a retail receipt for nearly five times this figure when originally sold. Other pieces exhibited the same relation to prices paid in the heyday of the market. The days when dealers promised to buy back furniture at increased prices after twelve months now seem so distant as to belong to something fictional of Lewis Carroll’s.

As an indication of the change in presentational technology affecting the middle range of antiques, a look at chain bookstores such as Smiths or Waterstone’s provides salutary viewing. Not long ago there used to be substantial separate sets of shelves for books on antique collecting, divided into sections on ceramics, silver, furniture, metalwork, etc, etc. My local Waterstone’s has no such content now. A few books by Millers or Dorling Kindersley and the ACC are tucked into the bottom shelves of sections on design, art, crafts and similar subjects. It is as though a light has been switched off. Yet there is a profusion of TV programmes dedicated to antiques and the search for them. The gap between visual screen and written word with printed illustration was never so graphically evident. The internet has replaced many volumes of reference. Computers can present images of antiques that books cannot emulate. Many dealers’ websites now show several views and details of pieces on offer. The public has got used to presentations on screen that make a single printed image a thing of the past. Even exhibitors at fairs send prospective clients video sequences by mobile telephone as part of their selling aids. In these circumstances the fair becomes simply an affirmation of status and public display.

For those of us who do not have the funds to buy at London fairs, provincial ones provide the opportunity, entertainment and social activity associated with the pleasures of collecting. We visit London ones to gawp at the best that can be found even if it is outside our financial scope. It would be a great loss if this hierarchy of fairs of all kinds did not exist. In June it becomes most prominently evident, even if all too briefly. Like the summer, it does not last long. Now is the time to enjoy it.