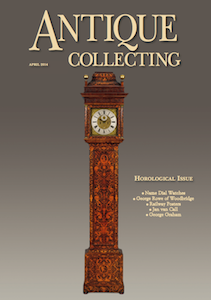 Come April, come spring and the Horological Issue of this magazine. We have always had a strong clock contingent in the ACC. The concern with accurate timekeeping, whether for longitudinal or personal orientation, is something that continues to occupy many bright minds and technological talents. It seems extraordinary to remember that time was not synchronised across this country until comparatively recently, so that when journeying, watches had to be adjusted for, say, a half hour difference between Bristol and London. As with modern air travel, stagecoach passage of any distance produced variations that were significant but more gradually realised, avoiding the horse-drawn equivalent of jet lag. Now the only local variation is one of an hour in spring and autumn to adjust for the turning of the globe.

In the horological issue of ten years ago we remarked on the initiative being shown by clock dealers who were going to the USA to present their stock in compensation for the unwillingness of US clients to board aircraft in the wake of the 2001 disaster. This reluctance has much abated despite occasional horrors, but the distinguished dealers’ willingness to travel and display stock has continued where market conditions dictate. In many ways clocks form part of a quite different sector of the antiques repertoire, not as much concerned with domestic furnishing fashions or artistic display and development as they are with skilful precision and mechanics. Yet, at the same time, clocks have a style statement to make that overlaps and is influenced by the demands of interior decor. Whether you take the view that a clock is merely a train of gears or whether you are in awe of the mystic and cosmic aspects of the measurement of time, the fact is that clocks are often fascinating to people who are not otherwise considered to have a mechanical bent. The time itself it not necessarily relevant to the clock buff; it is the means of producing it that is the attraction. Perhaps tis is a case of the process generating more curiosity and interest than the result.

Incidentally, in perusing the same magazine issue of a decade ago we came across an item relevant to the discussion on restoration decisions that has lately illuminated these pages. A late 17th-century marquetry clock by John Wise, missing the columns flanking its hood, had sold at Bonhams for £5,000 in 1984. In 2004 it came back to the market with the missing pillars sympathetically restored and fetched £31,000 with the new ones in place. Quite apart from a 620% value increase in 20 years, the restoration evidently did not detract from the purchaser’s view of the clock and case.

This month we examine the personalised watch dials of the 18th century in company with Ian Beilby and the Graham watch features with Terence Camerer Cuss. Furthermore, a case study looks at the fortunes of Daniel Clements family business, Pendulum, and its brave expansion into London’s West End. On a more controversial note, Terence Camerer Cuss examines the story of the Dutch van Call clock on display at the British Museum and records a list of what he perceives to be the shortcomings of this remarkable timepiece. There are dissenting views among experts where this clock is concerned and doubtless more will be heard as time goes by.

Our special issues are never solely confined to the featured specialist subject in hand. With Adrian Pett of Darnley Fine Art we look at original artwork for posters and we are also indebted to Chloe Bennett and John Day for a look at the Woodbridge artist, George Rowe. This may seem an example of parish pump promotion for a magazine based in Woodbridge, but as the author points out, George Rowe deserves wider recognition than he seems to have got in his lifetime and after. Subsequent auction of the substantial portfolio of his work long deposited in an American museum in Davenport, Iowa, led to an alert that brought him to the surface once again. A bonus for us is that our own Martlesham was included in the artist’s walks around Woodbridge on sketching expeditions. Never say that local association with antiques does not brighten the day.