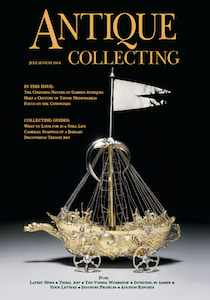 The advent of summer has brought the usual controversy over the nature of art, with the Royal Academy’s Summer Exhibition and a show of Folk Art at Tate Britain – ‘more suitable for an antiques fair’ – to the forefront of the fuss.

The Summer Exhibition at the Royal Academy always engenders a debate where those who regard the function of art to be an expression of protest of a social and political character, can rail against the Establishment represented by the Academy. The usual accusations as to its innate character and its Academicians – white, male, not enough women, like everything else about the country – are countered by those who point out that it is innately liberal and that the Summer Exhibition allows the work of amateurs to be hung alongside that of distinguished RAs in a unique and essentially generous display that embraces all types and sizes. This does not appease critics any more than this year’s appointment of 12 new Academicians drawn from less established or traditional backgrounds may have done. During a discussion with a small panel on the BBC TV programme on the Summer Exhibition chaired by Kirsty Wark, one of the participants complained that the work on display did not reflect the reality of the world seen from day to day, to which Tim Marlow, the new Director of Exhibitions, wittily suggested that perhaps she ought to stay in more. There is no likelihood of the Summer Exhibition being altered drastically just yet; it continues both to give pleasure and to enrage those who wish to see its organisers chasing down Piccadilly with a mob at their heels.

Tate Britain put on an exhibition of Folk Art, something which David Lee, the editor of The Jackdaw magazine, said belonged in an antiques fair, not in a place dedicated to the care of a unique national resource. In an article in The Times, he pointed out that straw men and crude paintings of an oblong pig or the fattest bloke in Lincolnshire don’t have the pulling power of a Matisse, so that the Tate’s problem of falling attendances will not be cured by folky jumble that can be found in abundance in shops and bric-a-brac venues. It gave Lee the opportunity to attack Sir Nicholas Serota on the grounds of his policy downgrading anything not contemporary art or ‘alternative’. The Tate has apparently dispensed with some of its most eminent art historians. This has reduced the scholarship available to provide information on the pictures, leading to a lack of intelligence and focus. The gallery has become, according to Lee, a sort of religious standard-bearer for anything contemporary or alternative and in this context folk art has a relationship to the folksier wing of contemporary art, thus justifying the exhibition. Serota has, the article said, so institutionalised contemporary art to the extent that ‘challenging’ work is shoved down our throats in a range of London’s nine public galleries paid for by the Arts Council. They do not show historical surveys, more traditional painting and sculpture or even ‘cultural idiosyncrasies such as folk art’. The Hayward Gallery is suggested to be more suitable for folk art than the Tate, which exists to show great British art.

That the Arts Council is inclined to push alternative art rather than to support displays of traditional painting is something that, as an ex-chairman of a public art gallery’s trustees, I can confirm. Its purpose is to boost contemporary artists who need support and to broaden the country’s perceptions of art to embrace forms other than accepted competence in representative visual depiction. Although this policy leads to bizarre and nonsensical displays on many occasions it has the courage of exploration and experimentation, which is to be applauded. Modern art can not just recycle the safe formulae of the past. This may seem anomalous to write in a magazine dedicated to the appreciation of past forms but we have seen recently how the dividing line between what is collected as ‘antique’ and what is essentially quite modern has become increasingly blurred. We go to view a range of exhibitions if only to reconfirm our entrenched preferences, but there is always the danger of a sudden enlightenment brought about by an exceptional exhibit. That is one of the excitements of art.

One thought on “July/August 2014 editorial”