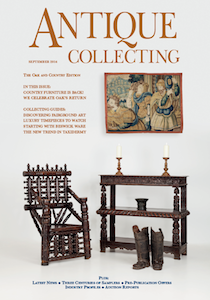 My local junk dealer takes a gloomy view of the younger generation. He says that rather than buy his excellent second hand furnishings when setting up home, they buy new things on hire purchase. They get into long-term debt for the sake of new domestic possessions. Unlike the older generation to which we both belong, they will not set up their homes by buying what they can afford, making do with old stuff before income and bank balance can cope with expenditure on new interior decor.

I tend to agree with him in cowardly fashion as I wince at the sight of some of his stock, but I have to agree that it is perfectly usable. When I was first married we started with two armchairs for a pound each and then, one afternoon in the Chalk Farm Road, came across an inlaid Edwardian Sheraton suite of settee, two armchairs and three upright chairs sitting on the pavement outside a semi-antique shop. The price was £9 the lot. Although it needed some attention, our careers as antique collectors had begun. So do today’s young generation not do the same?

An answer came from our window cleaner, a handsome lad who has recently married. I am currently downsizing my library and taking packets of old books to Emmaus, a worthy charity for the homeless with a warehouse, where my wife can browse the second-hand furnishings while the car is unloaded. On the last occasion, she found a pair of smartly-woven rugs, each about four feet by six, in very presentable condition, and bought them for ten pounds each. They are for the conservatory and suit it admirably. She rejoiced that we would not, after all, be paying IKEA for two Dragör rugs of the same size for £40 each plus delivery.

The window cleaner was present as the rugs were put in position in the conservatory. Disapproval emanated from him. How do you know, he asked, whether they haven’t got fleas in them? Second-hand furnishings are, he said, grubby and insanitary. He and his new wife, a Spanish girl, wouldn’t buy old stuff like that. It was quite clear that in his case the local junk dealer is absolutely right. There is no likelihood of his straying into antique and old furnishings. To the change in fashion reported as affecting those who can afford antiques, you can add youthful disdain by those who can’t.

This summer the big London fairs have reported excellent business. They are at the top end of the antiques and collecting activities. The prices asked at these celebrated shows reflected this. In contrast, general antiques and domestic goods being sold at auction this summer, whether in London or the provinces, were astonishingly cheap. Many perfectly serviceable domestic and decorative articles were snapped up at levels so much lower than their current manufacturing cost that it causes wonder. There really are bargains to be had, as the plethora of TV shows dependent on auction rooms continues to confirm. Set alongside what appears to be a revival for antiques of quality – the article by Andrew Singleton in this issue also highlights this – it would be interesting to discover any price interrelation or timing factor between the two phenomena. Does one influence the other? Will the bargain situation attract more buyers? Are they quite separate markets? The evidence is that they are; one does not pull up or pull down the other. It is tempting to consider the socio-economic analogy about creating wealth so that its effect trickles down but any linkage between top and lower sections of collecting and decorative expenditure fails completely due to scarcity of fine goods and no demand from oncoming generations. If the window cleaner is anyone to go by, there won’t be any for a long time. The reversion to a niche market for the mature seems to be complete, despite the multiple daytime TV programmes. But then working people don’t watch TV in the afternoons, do they?