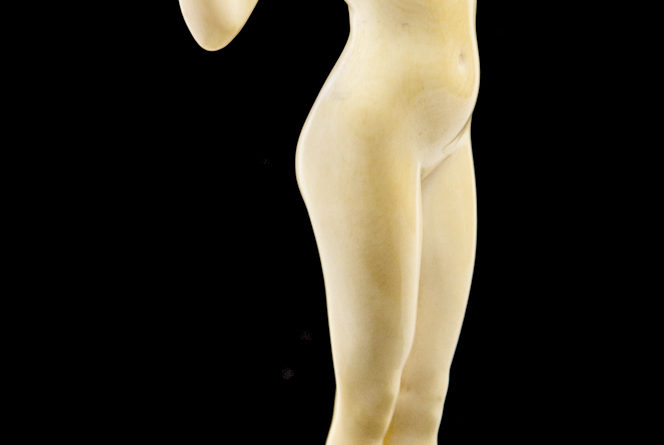 Whilst the market for certain ceramic figures by Doulton and Coalport, in particular the traditionally dressed ladies produced from the 1940s, is struggling, the thirst for Art Deco is as strong as ever. The fewer clothes, the better, seems to be the trend for figures which were produced in bronze, ivory and ceramic. Hansons fourth Decorative Arts auction on 22nd June showcases several examples of highly desirable Deco figures dating from the

1920s and 30s. A highlight within the auction is a striking ivory figure by French sculptor Paul Philippe, titled ‘Awakening’.  Standing 27cm high, on a typical green onyx base, the figure, produced circa 1925, depicts a nude woman with one arm outstretched, as though stretching after a deep sleep. The figure was discovered at a recent valuation day in Lichfield.

‘Awakening’ is typical of the type of ivory and bronze figures produced in this period  by French and German sculptors, who popularised the influence of body image and health in the decades leading up to the second world war. Figures by Ferdinand Preiss and Demetre Chiparus, as well as Philippe and Lorenzl, can range in form, with varying amounts of clothing represented. The most desirable at auction appear to be the figures which are either nude or semi-nude. With a relaxation of the prudish sentiments of the Victorian and Edwardian era in Britain, the Art Deco figure became a desirable object for the discerning art collector.

The trend soon caught on with domestic producers in Britain designing and marketing similar figures in ceramics. Leslie Harradine, a designer with Royal Doulton, produced a series of approximately 10 porcelain figures of nude bathers. These are now highly desirable amongst collectors at auction. The reason for their collectability is partially due to the fact that they never really caught the imagination of the mass market which favoured the more traditionally romantic figures of ladies in dresses. The more risqué figures by Doulton and the Continental ivories were popular in Europe and America and remain so to this day.

Awakening, By Paul Philippe is estimated at £800-1,200 in the 22nd June Decorative Arts Auction in Etwall, whilst Leslie Harradine’s Doulton figure the Bather has an estimate of £300-400. Viewing for the auction will be on Wednesday 17th June and the full catalogue will be available online at www.saleroom.com.