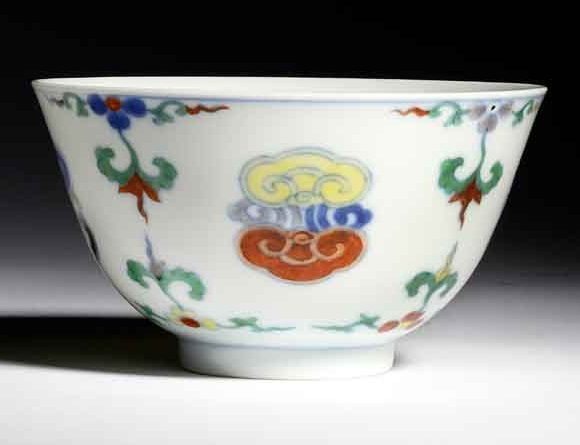 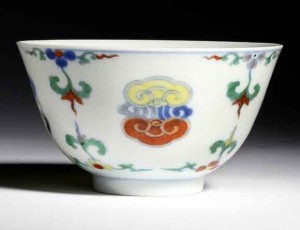 Leading the recent Asian Art sale at Woolley & Wallis in Salisbury was a small doucai lingzhi bowl, measuring just 10.4cm wide, which achieved just under half a million pounds.

Bearing a six character Yonzheng mark and of the period 1723-35, the bowl is now bound for China courtesy of a private Chinese collector who bought the lot for £482,800 (including buyer’s premium). 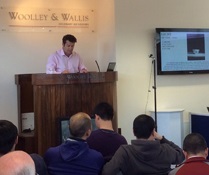 The sale commenced with a private collection of kingfisher feather ‘jewellery’, consisting of hairpins, earrings, brooches and other ornamental pieces, all decorated with kingfisher feathers and gem stones.  The items, from the Qing dynasty (1644 – 1912) all sold; the twenty lots making £62,000.

Thirty five lots from the collection of Robert Frederick Hathaway (d.1991) of Cape Town, South Africa, previously unseen on the market, also achieved a 100% sold rate with a total of £240,000. 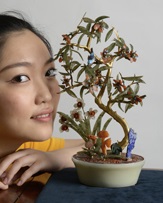 Featured on the front cover of the Asian Art catalogue, a rare pair of Chinese Imperial pale celadon jade models of jardinières, Qianlong 1736 – 95, represented the rarity and quality sought after by the Chinese market. Each jardinière had a gilt metal blooming spray, decorated with white jade, coral, agate and with a small bird decorated with kingfisher feathers, perched on a branch.  The pair, from a distinguished private collection, sold for £183,000.

Clive Stewart-Lockhart  commented ‘We are delighted with the sale, and the prices achieved for the major lots were exceptional.’