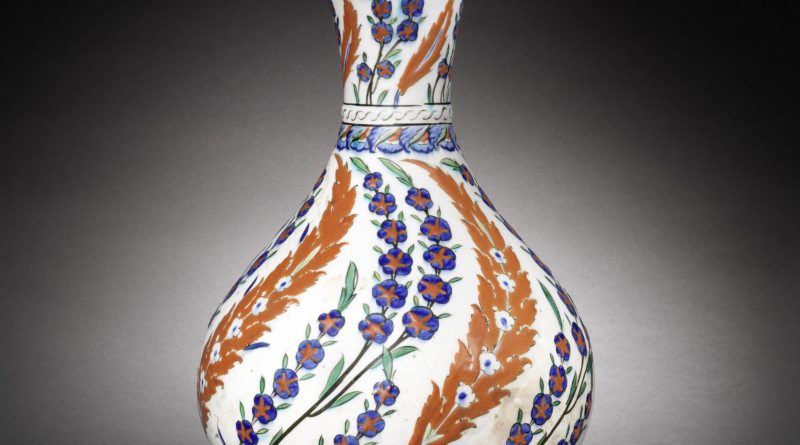 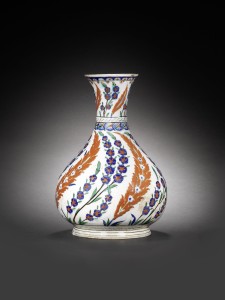 Although it flourished for less than half a century from the 1560-1600, the pottery of Iznik was responsible for some of the most innovative designs of its day and an artistic legacy which lasted for centuries

The sleepy rural town of Iznik in northwestern Turkey, still surrounded by the remnants of massive 5th-century Byzantine walls, is chiefly known in the West as old Nicaea, the site of the great Church Council of the year 325 from which emerged the Nicine creed.

But Iznik has another identity in the history of art, as the seat of production in the late 15th through the late 17th centuries of the famous Iznik ceramics, which are among the most renowned artistic products of Ottoman culture.

Today, Iznik tiles, tablewares, and other ceramic products command extraordinary prices on the art market and are exhibited in the collections of most of the world’s great museums. But in addition to their great beauty, the underglaze-painted ceramics of Iznik also hold the key to our understanding of the emergence of the new Ottoman court style in Istanbul in the 16th century.

Throughout the later 14th and earlier 15th centuries Iznik, with its deposits of potter’s clay and its proximity to the forests of Bithynia as a source of firewood fuel for ceramic kilns, appears to have been the site of the production of rather ordinary reddish-bodied pottery wares with a distinctive repertoire of designs that enjoyed a wide distribution throughout Asia Minor – known in the archaeological record as ‘Miletus-ware’.

With the possible exception of carpets and silk textiles probably no medium in the history of art traveled as widely or as frequently over such long distance as did ceramics.

From the 13th century onward, elegant and expensive high-art Chinese porcelains was exported west into the Islamic world by sea and more rarely along the so-called Silk Road. Their perilous journey westward was prompted by an immense demand in Islamic courts, whose miniature paintings from the late 14th century onward depict them as prized possessions of rulers.

Recognising this fashion in the Middle East, the Chinese began to produce blue and white porcelain specifically for export to the Islamic world, even manufacturing pieces in traditional Islamic shapes or items decorated in the Arabic language. Muslim elites prized porcelain, not least because of the mystery at the heart of its production.

True porcelain is the product of kilns capable of sustaining temperatures in the region of 1280-1400 degrees Celsius for a period of several hours. It was the ‘secret’ ingredient of petuntse that allows the body material to vitrify – that is to turn into a solid glass-like material.

The search for a porcelain-like ceramic took place in the Islamic world but, due to the absence of petuntse, true porcelain did not come to the Middle East until modern times.

Nevertheless, by the 12th century Islamic potters in Persia, by combining clay with various ingredients, had produced a very strong white body material which in many respects resembled Chinese porcelain. Although many names have been given to this mixture of potter’s clay, ground-up quartz, and glassy frit the most common is fritware.

Blue and white fritware that either imitated Chinese porcelain or was strongly influenced by it was made in Iran under Timurid and Turkmen patrons in the 15th century, including Iznik. However it was not until the end of the century that a major change occurred transforming Iznik from a centre of production of cheap rather ordinary pottery into the a major centre for the production of ceramics of superb technical quality and extraordinary artistry.

The new technique that was to bring Iznik fame and fortune is the form of ceramic decoration known as underglaze-painting. In this technique, which is essentially the same as that of porcelain, but which was adapted to the artificial white body material or fritware developed in Iznik, the creation of a piece of tableware proceeds in several stages.

First the potter’s clay is mixed with ground-up flint (yure) and glassy, sandlike frit, and with water. The dough like material is then thrown – shaped – on a potter’s wheel. The resulting piece of popttery, now a light gray in colour, is then dried. Before deoration it is covered in a thin coat of white skip that appears to make it more porcelain-like, and then dried again. The decoration is than painted on the white slip.

In the earliest Iznik wares the decoration consisted of one colour: cobalt blue. The colour could be used in a dark and opaque form, or thinned like an ink wash to produce a translucent light blue over the slip, and was suitable both for lines (dark and opaque) and coloured areas (either dark or light).

Gradually the range of colours increased. By the second quarter of the 16th century, a translucent turquoise, used for coloured areas but almost never lines, was added to the repertoire.

Before 1550, a dramatic new discovery was made – a chrome-based black pigment what could be used to make very thin, precise lines in a design strikingly similar to a manuscript illustrator’s ink. In addition to blue and turquoise for coloured areas, the Iznk potters developed tow others – a pale, thin purple based on manganese and a grayish green.

The small number of surviving wares (there are virtually no tiles in this colour scheme) from this period of experimentation, are among the greatest masterpieces of Iznik production.

Around the same time, Iznik artists experimented with the development of coloured slips – claylike coatings in pale blue or milky pink – that could be used for a basic ground colour instead of the ubiquitous white. A third and final developmental phase of the underglaze-painting technique occurred after 1555. First a true red, formed from blobs of thick slip-like pigment, was developed.

Finally, by the late 1560s the most difficult colour of all, a translucent emerald green related to the earlier turquoise was perfected.

The decoration in various colours having been painted on the slip-coloured vessel, the third stein the making of a piece of Iznik ware involved covering the painted decoration with a coating of glaze.

This consisted of glassy material, including frit, combined with lead, which served as a flux, allowing the glaze to melt in the firing process and cover the whole vessel with a thin, shiny, and transparent coating, which in apposition to the various colours caused them to develop the full intensity of their various hues.

The resulting piece of Iznik could bear an astonishingly close resemblance to Ming porcelain. By 1600 Iznik wares were exported and esteemed over much of the Middle East and Europe.

This late 15th-century change in technique and style was to transform the sleepy provincial town of Iznik into a great centre for ceramic manufacture, which came quickly into being in the late 15th century, flourished through the 16th, and then shortly before 1600 suffered a the first effects of a catastrophic decline that transformed it, 50 years later, into a ghost town.

Today, we surmise the combined effects of catastrophic fires in the potter’s quarter, the cumulative and adverse health effects of breathing silica dust and the lead vapours from the glazes, the endemic malaria of Iznik’s lake basin, and a profound change in the Ottoman economy – all combined to bring the final glorious period of Iznik polychrome production – essentially only about four decades from 1560 to 1600 – to a gradual and aesthetically negligible end by the late 17th century.

The legacy of Iznik Pottery

In the 17th century, the popularity of Iznik wares in Europe led to various attempts at imitation, the most successful of which came from a maiolica manufacturer in Padua.

Earlier European imitations of blue and white Ottoman wares are known to exist but the Padua products produced around 1630 and largely confined to flat dishes with a stereotypical Iznik design consisting of a central decoration of a large and sinuous saz leaf or carnations and tulips, are the only early examples of European success, however incomplete, in duplicating the much-admired but elusive Iznik red.

Joseph-Theodire Deck (1823-1891) is considered to be the first ‘modern’ studio potter. Born in Alsace, he worked for a time in a stove factory making tiles and set up his own independent atelier in Paris under the Second Empire in 1856.

Here, his experiments at reproducing ancient ceramics led to the production of a very wide variety of ceramic wares around the central theme of historicism. Deck’s attention turned to the examination and reproduction of the greatest examples of the Iznik tradition.

His pupil Edmond Lachenal also produced a number of magnificent pieces in the mid 19th century among which is a very fine example at the V&A. Deck’s success and remarkable skill in reproducing the historical Iznik technique inspired a host of European studio potters who followed him to undertake similar efforts. In Italy, the Cantagalli atelier in Florence, founded by Ulisse (d. 1901) and Giuseppe Cantagalli, produce after 1878 a large and splendid pieces de forme in the polychrome Iznik technique, utilising the saz-style decorations of the second half of the 16th century with sinuous curved leaves.

In England, the artist potter William de Morgan (1839-1917) was part of the Arts & Crafts movement, and worked closely with William Morris from 1862 onwards. His admiration for the technical prowess of Cantagalli atelier in Florence, where he worked during parts of every year after 1892, led to his own historicism, which included a number of works inspired by Iznik pottery, and others more directly influenced by the Ottoman pottery of late 16th century Damascus.

His factory at Fulham, which he operated from 1888 onward, produced a number of tiled house furnishings, including mantels and fireplaces, some of which ended up in homes in New England.

(Adapted from Iznik, the Artistry of Ottoman Ceramics by Walter B. Denny, published by Thames & Hudson.)

What Iznik Pottery sells for

This rare İznik bottle sold for £457,250 at Bonham’s Indian and Islamic auction in 2013. Dubbed ‘one of the most significant pieces of İznik to have appeared at auction’ the 31.5cm bottle came from the ‘Classic’ period of İznik (the 1570s) encompassing its last and best-known phase in polychrome in the floral style.

The use of under-glaze red is used to maximum effect on this bottle with its bold orange-red saz leaves decorated in thick relief.

Alice Bailey, head of Bonham’s Islamic Department, said: “The market for important İznik pottery ceramics is very strong, particularly among Turkish collectors, and these pieces certainly did not disappoint.” 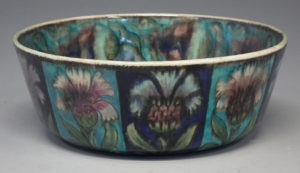 An Iznik faience jug opened Sworders’ Summer Country House sale in June 2014. Dating from the late 16th century and measuring 19.5cm, it is painted in black, turquoise and blue with fritillaries and other flowers (the mouth and handle are both restored).

With a hammer price of  £1,350 it sold within its estimate of £1,200 to £1,500. To make their wares as white as possible Iznik potters perfected a pure white coating known as slip or engobe, which they used to cover the off-white body before adding the final decoration. The shapes depicted in many of the early items were taken directly from the Ottoman and Timurid metalwork of the time.

A William De Morgan dessert bowl in the Iznik style, with a band of carnations on turquoise and blue panels, painted ‘De Morgan C.P.’ to base, 20.5cm diameter. Known for his tiles and ceramics, De Morgan’s inspiration came from Middle Eastern ceramics, with their rich deep colours, dynamic floral designs and architectural forms.

Among the painters who worked for him were Fred and Charles Passenger (the C.P of the bowl), Joe Juster and Jim Hersey. Their initials are frequently found on the on the base of De Morgan pots. The bowl, part of a dinner service, sold for £660 in April 2014 at Peter Wilson Fine Art Auctioneers.