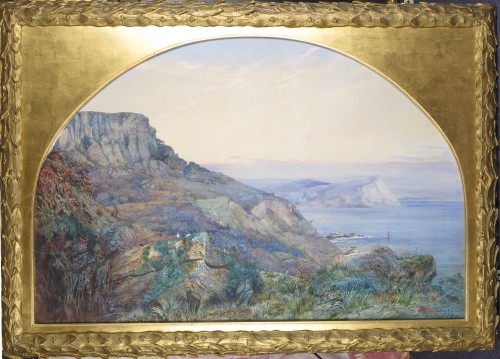 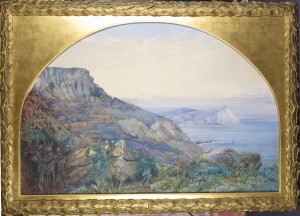 A watercolour of Ventnor, painted by one of the leading feminists Barbara Bodichon sold for a world auction record price of £9,800 (premium inclusive) at Salisbury based auctioneers Woolley & Wallis.

Barbara was born in 1827 as a result of an extramarital liaison between Whig politician Benjamin (Ben) Leigh Smith (1783–1860), (the only son of Radical abolitionist William Smith) and Anne Longden, a milliner from Alfreton. Named Barbara Leigh Smith, she later changed her name when she married eminent French physician, Dr. Eugène Bodichon. Throughout her life she was activist for women’s rights and in 1858, she set up the English Women’s Journal.

Signed, inscribed and dated ‘Barbara Leigh Smith Ventnor I W 1856’ the 71cm x 108cm work was inspired when the artist staye with Anna Mary Howitt on the Isle of Wight, painting this during her stay. The picture was well received, the critic W.M. Rosetti described it as a ‘capital coast scene, full of real pre-Raphaelitism’. Bodichon, seeking more wild coastal landscapes as subjects, went on to visit North Africa and the landscapes she painted from the villa which the Bodichon’s purchased near the coast in Algeria formed the basis of many of her future exhibitions.

The watercolour and bodycolour with scratching out, set in the original leaf and berry frame was offered in the Paintings sale on the 23rd of September with an estimate of £1,000 – 1,500. 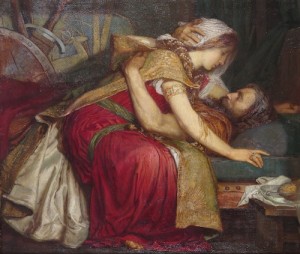 The highlight of the sale was an oil on canvas by Harry Robert Mileham (1873-1957), titled Tristram’s Deathbed which sold for over four times the top
estimate at £25,600 (premium inclusive)