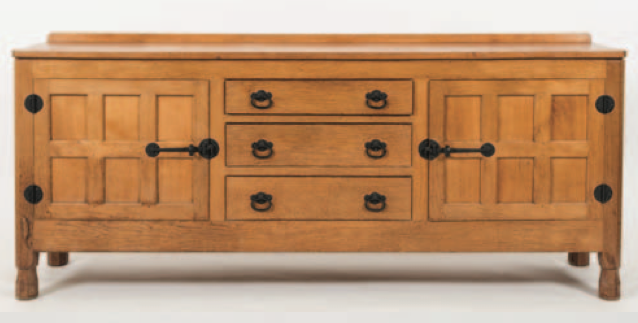 While the best known of the Yorkshire ‘critters’ is undoubtedly, Robert Thompson of Kilburn – known as the ‘Mouseman’ – many other craftsmen of the era and area signed their work with an animal or other carving.

A collection of ‘Lizardman’ oak dining room furniture, comprising an octagonal dining table, eight chairs, a sideboard and display cabinet are expected to make between £2,000-£2,500 when they go on sale at Bearnes Hampton and Littlewood fine art sale on October 6 and 7.

Derek ‘Lizardman’ Slater, who worked exclusively in oak, took the name when he joined Thompson apprentice Martin Dutton and continued to carve a lizard onto all his work. In his earlier solo career he was known as ‘Fisman’.

Mouseman himself started his business as a maker of ecclesiastical oak furnishings and furniture. It has been suggested that the ‘critters’ trademark came about by accident in 1919 after Robert Thompson had told one of his colleagues that he was ‘as poor as a church mouse.’ At the time he was carving a cornice for a screen and this random remark inspired him to carve a small mouse which went onto become a trademark for all his works.

Many of the other craftsmen who signed their pieces with little carved animals, were apprentices at the Thompson workshops. These included Colin ‘Beaverman’ Almack, Albert ‘Eagleman’ Jeffray and Martin ‘Lizardman’ Dutton to Peter ‘Rabbitman’ Heap, David ‘Oakleafman’ Langstaff and Wilf ‘Squirrelman’ Hutchinson. took up and continued his tradition of carving a lizard onto all his work.

Thomas ‘Gnomeman’ Whittaker (1910-1991) was another ‘critter’ who lived and worked at Littlebeck five miles from Whitby. Legend has it that every time an acorn sprouts, a gnome is born and that gnome will then guard the oak tree all its life.

Ex mouseman craftsman Alan ‘Acornman’ Grainger Senior started working at Bradsby in North Yorkshire in 1934, after learning his craft at Medds in Easingwold. When his son, Alan Grainger Junior, joined the firm in 1958 Acorn Industries was formed and a year later they started using the ‘acorn’ trademark. During the 1960s it employed seven craftsmen with many other former apprentices setting up their own workshops in the area. The company closed in 2005 when Alan Grainger’s grandson Derek, the last family member of the business, retired.