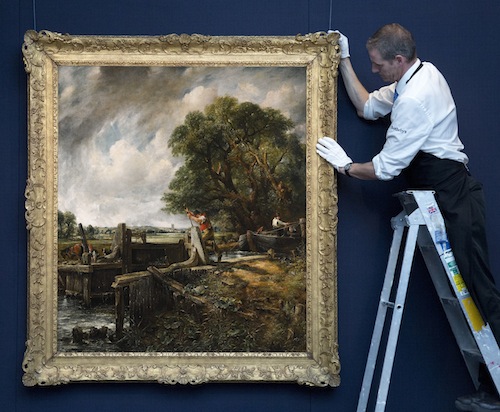 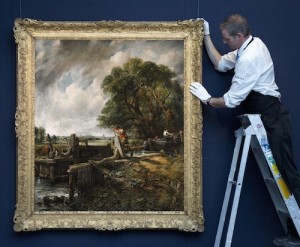 A painting by John Constable – considered one of his finest works – is expected to make £12m when it goes under the hammer in December.

The Lock, painted in 1824, propelled the Suffolk painter to fame after a landmark exhibition at the Royal Academy. It is one of two versions painted by the artist the first of which sold at auction in 2012 for £22.4m.

The show had included his famous ‘six footer’ landscapes, including The Hay Wain, which came to be seen as the pinnacle of his artistic career.
The ‘six-footers’ are among the best-known images in British art and comprise the famous series of views on the river Stour, as well as Constable’s more expressive later works such as Hadleigh Castle 1829 and Salisbury Cathedral from the Meadows 1831.

The Lock sold immediately, leaving a jubilant Constable going back to his studio at an unexpected career high.

He is then said to have painted his second version with the luxury of more time, recreating it faithfully with “small but important” changes such as more dramatic rainclouds, initially with a view to selling it.

Instead, once completed he kept it for himself, with labels in his own handwriting on the back showing he lent it out for several prestigious exhibitions.

Upon his death in 1837, it was sold alongside other masterpieces and was snapped up by leading collector Charles Birch for £131 and ten shillings; a higher price even than the famous Salisbury Cathedral.

Years later, Birch is said to have “fallen on hard times” and the painting was sold for the second time in 1855.

Then, it broke the record for any work by Constable at £860, being purchased by wealthy Worcestershire industrialist William Orme Foster, owner of The John Bradley & Co. Ironworks in Stourbridge and a company which manufactured the first steam locomotive to run on a railway in the US.

It has remained in his family ever since, hung for 100 years in the smoking room at Apley Hall, Shropshire.

The painting will be sold at Sotheby’s Old Master & British Paintings Sale on December 9.