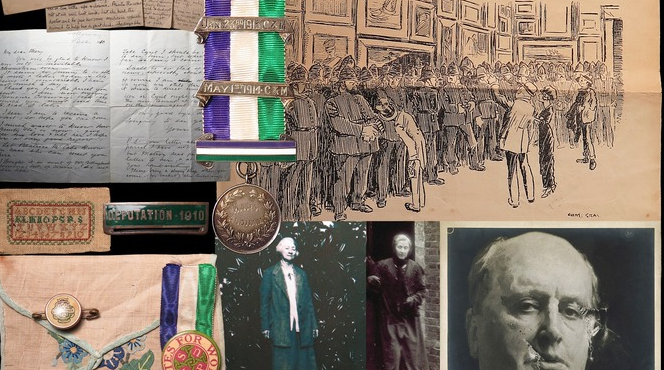 With a gallantry medal selling for a world record in September, and the release of a film celebrating votes for women, suffragette memorabilia has never been more collectable. But, while medals maybe easy to identify, jewellery from the period is more contentious.

Earlier this year a gallantry medal and letters from prison as well as sampler by 85-year-old suffragette Mary Aldham sold for a record sum of £23,450. (including a buyer’s premium of 17.5 percent) – four times its estimate. It went to a private UK collector who had placed a commission bid and was contending with a determined telephone bidder on the day.

And with the release of the film Suffragette, memorabilia from the struggle is faring well on rostrums around the country. 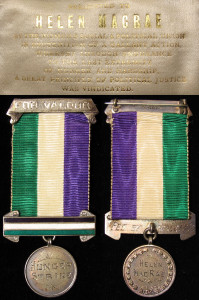 Another medal – awarded to Aldham’s cohort Helen McRae who served a jail term and went on hunger strike – sold to an academic collector for £12,300 at an earlier sale at Suffolk auctioneers Lockdales.

Lockdales’ auction manager James Sadler said: “It was an incredibly rare medal. I’ve never seen one before. Suffragette medals rarely come up for auction, but we have had two brought to us in the space of a year. We would be delighted to see further examples but as there are so few in private hands it may be a long time before we see another. The stories behind these medals, those of Helen Macrae and Mary Aldham (aka Mary Wood) are fascinating. These are among the most historically important items we have ever dealt with.”

She smashed windows in Whitehall in 1910 and was imprisoned for four months. During a second four-month jail term, she went on hunger strike and had to be force fed. The front of her medal is inscribed ‘For Valour’ and the reverse reads “Fed by Force 1/3/12”.

Mary Aldham went on hunger strike in Holloway Prison four times before the ‘Votes for Women’ movement ended on the outbreak of the First World War. 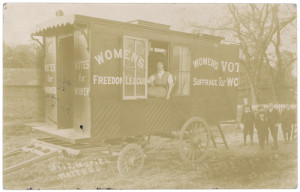 Her gallantry medal has a ‘For Valour’ bar and three silver clasps, the words ‘hunger strike’ are also present.

Among the letters which were part of the lot, were two to her daughter and copies of Suffragette magazine. A bag made in Holloway and a temporary release certificate (called the ‘Cat and Mouse Act’) were also included. 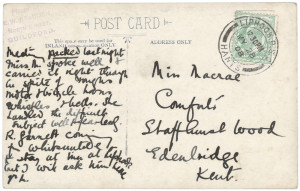 Aldham was one of the most remarkable of the suffragettes. In 1914, just before the outbreak of World War One, she was still very active in the movement, at the age of 85. Her most headline making crime came in April 1914, when she went to London’s Royal Academy Exhibition. Here she slashed a painting of the author Henry James by John Singer Sargent. James was targeted due to his regular anti-suffragette writings.

Antiques and collectables are always worth much more when they are attributed to a significant event or person – ‘recovered from The Alamo,’ or ‘belonged to Charlie Chaplin’. That is exactly what has happened to suffragette memorabilia and jewelry over the past 10 years.

According to a widely propagated myth, suffragette jewellery in Britain was made of green, white and violet semi-precious stones, whose colours were a code for Give Women Votes. Suffragette jewellery originated in the 1890s, after the suffragette movement was banned. It was produced until 1918, the year in which British women first obtained the right to vote. Or so the myth goes.

By the 19th-century century 70 percent of British men had the vote but enfranchisement was still a long way off for the women. The only European country that had given women the vote, in 1906, was Finland. Formal representation was made to the British Parliament in the 1860s. Sympathetic pressure groups sprang up, many within established social/cultural organisations, such as The Artists’ Suffrage League, The Catholic Women’s Suffrage Alliance, The Church League for Women’s Suffrage, The Jewish League for Woman Suffrage, and The Men’s League for Women’s Suffrage. Such groups, and their members, were known as suffragists – those supporting the extension of voting rights, particularly to women. They were brought together in 1897 by the formation of The National Union of Women’s Suffrage Societies (NUWSS).

The NUWSS and their supporters made no progress. In October 1903 one campaigner, Emmeline Pankhurst, broke away and, with her three daughters, founded The Women’s Social and Political Union (WSPU). Their motto was ‘Deeds not Words.’

WSPU numbers swelled. In 1905 their protests became violent. They committed acts of arson and vandalism. When imprisoned, their members went on hunger strikes. One, Emily Davison, died after jumping out of the crowd in front of King George V’s racehorse during the running of the Epsom Derby in June, 1913.

WSPU members raised their profile in 1906 by moving their headquarters to London. Their behaviour had become so extreme that the distinguishing, and disparaging, term suffragette was coined by the British press – also in 1906.

Late in 1908, the government passed The Public Meeting Act, ‘to prevent disturbance of Public Meetings’. That additional piece of legislation made WSPU’s disruptive behaviour illegal, but did not outlaw WSPU itself. Public support for the cause – and horror at the prison sentences being handed out – meant that police were at times instructed not to make arrests.

The official colors of WSPU were declared and explained in the spring of 1908. They were purple (dignity), white (purity) and green (hope). Hundreds of protestors, wearing those colours, would march behind similarly coloured banners. In 1910, more than 300 suffragettes marched on parliament. The police response was so brutal that the movement termed the day ‘Black Friday’.

Those three colours were never a secret. They were used frequently in newspaper cartoons and on postcards – by supporters and opponents alike. But there was never any mention of green-white-violet.

Mappin & Webb, London jewelers to royalty, issued a catalogue of Suffragette Jewellery in time for Christmas 1908. In 1909, leading suffragettes Emmeline Pankhurst and Louise Eates were both presented with specially commissioned pieces in purple, white and green.

WSPU suspended suffragist activities in 1914, and its members threw themselves wholeheartedly into the war effort. In 1917 they changed their name into The Women’s Party. British women aged 30 and over were given the vote in 1918, reduced to age 21 in 1928.

The GWV colours and motto, and the secrecy surrounding them, is a myth of modern invention. It creates a false provenance that attempts to give pieces of Victorian and Edwardian jewellery a value they do not merit. The perpetuation of the GWV myth serves only to damage confidence in pieces of genuine suffragette jewellery.

As for accepting examples as genuine? Well, the Mappin & Webb catalogue of December 1908 shows that some commercially produced pieces, named as such, did exist shortly after the WSPU announced their colours. But to manufacture or wear any in the UK after August 1914 (the outbreak of WWI) would have been considered unpatriotic. So the likely timeframe claimed by believers in the myth is cut from about 25 years to barely six.

So, is the Green-White-Violet nonsense part of some smoke and mirrors act being used to authenticate pieces no more connected to suffragettes than jumbo jets? I think so – and so does Beverley Cook, the curator at the Museum of London with special responsibility for the museum’s substantial suffragette collection. She is adamant that there is nothing in the museum’s collection to support it.

Be just as cautious with suffragette jewelry as you might be when, say, offered a piece of memorabilia from Custer’s Last Stand. Convinced? Then be prepared to pay the premium – but get the guarantee written on the receipt.

Information on suffragette jewellery is by Ivor Hughes writing for the New England Antiques Journal.

5 thoughts on “Suffragette memorabilia – separating the fact from the fiction”