A much celebrated painting by John Constable, entitled The Lock, has sold for £9.1 million at Sotheby’s recent evening sale of Old Masters and British Paintings. The total sales for the evening totalled £22.6 million. 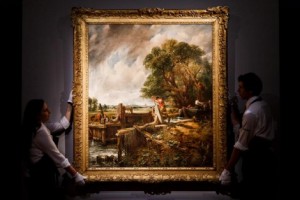 The monumental landscape depicting the countryside of the painter’s “careless boyhood” was the highlight of the Old Master & British Paintings Evening sale.

Painted circa 1824-5 when Constable was at the height of his powers, The Lock is one of only three major works by Constable left in private hands. This iconic image is the fifth in the series of six monumental landscapes popularly known as the artist’s ‘Six-Footers’, which for many define the pinnacle of Constable’s career. Depicting a bucolic scene on the River Stour in the artist’s native Suffolk, and painted in response to the huge critical acclaim that greeted Constable’s first treatment of the composition (exhibited at the Royal Academy in 1824), the picture was treasured by the artist. Retained by him in his studio until the end of his life, singled out by him for prestigious exhibitions, it was chosen as the basis for the engraving that was to make it among the most familiar and celebrated images in the canon of British art.

Alex Bell, Joint International Head and Co-Chairman of Sotheby’s Old Master Paintings Department said: “The Lock belongs to a small group of pictures that define Constable’s oeuvre and genius. The artist’s absolute mastery as a landscape painter is everywhere in the picture and this was reflected in the result achieved tonight.

“The painting was one of many museum-quality works presented in the sale, an unprecedented proportion of which were from private collections and came to the market for the first time in several generations. The combination of quality and freshness to the market are key in this field and certainly account for this evening’s strong results.”

Various other works also commanded impressive results, most notably the early Netherlandish painting depiction of the Madonna and Child by Jan Gossaert, which sold for £4,629,000.

Elsewhere, the left wing of a small triptych commissioned in Paris at the end of the 1440s or around 1450 by Dreux Budé sold to the Musée du Louvre, Paris for £965,000; a depiction of a cavern in the Gulf of Salerno, near Naples by Joseph Wright of Derby made £665,000; an outstanding example of Govert Flinck’s tronie paintings (fancy-dress studies, based on a real likeness) of the first half of the 1640s soared above estimate and realised £485,000; while strong results for gold ground paintings saw a group of four, each of which found buyers, make a combined total of £703,500.