If owning a Picasso seems beyond your wildest dreams why not try one of his ceramics? In recent months, estimates have been as low as £800.

Because so many would-be Picasso collectors are being priced out of the market for his paintings and works on paper, it is his ceramics that are now really starting to attract attention. 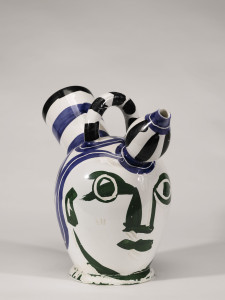 The works are made affordable because they were produced in runs of up to 500 and while the artist painted the designs, he left the actual pottery-making to others. Animals, birds, nymphs and mythological characters are featured in the designs, including the minotaur, a recurring motif in Picasso’s work. Many of the pitchers and some of the vases portray stylised, and much sought after, chouettes (owls). Handles were often made from facial or anatomical parts of the animal depicted. The subjects are very creative and playful, and include Greek mythological figures, corrida scenes, and face motifs. Unique, as well as editioned, these ceramics made possible the artist’s dream that anyone could own a Picasso.

For the very lucky, or prescient collector, it was a visit to the Madoura workshop in Vallauris while holidaying in the south of France in the 50s that resulted in a Picasso ceramic. 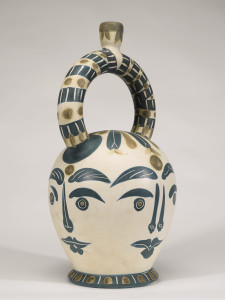 Visitors to the workshop, nestled between Cannes and Antibes in a town known for its arts and crafts, would be amazed to identify the elderly potter assigned his own corner – as one of the co-founders Cubism.

The Spanish artist first visited the pottery in Vallauris in 1946, where he struck up a friendship with the owners , Georges and Suzanne Ramié who offered the artist a lump of clay. This humble gesture fired Picasso’s imagination and ignited a working relationship with the Ramiés which resulted in the production of thousands of ceramics.

The appeal of the artisan lifestyle and the opportunity to work in a new medium prompted Picasso to ask the couple if he could work with them, and in 1947 he began creating his own pieces there.

He was treated like any other employee – although his fellow workers did not have Brigitte Bardot, Gary Cooper or Richard Attenborough drop by for a chat. 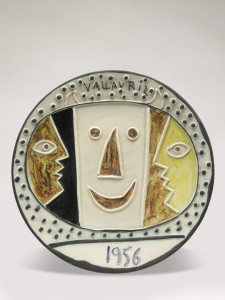 Customers who approached the elderly employee looking for sales advice were astonished to find themselves face to face with the celebrity artist.

The years Picasso spent in the region are understood to have been among the happiest of his life; he told his biographer Pierre Daix that he felt at home at Madoura. Two women bookended the artist’s time with the workshop: his lover Françoise Gilot who gave birth to a son, Claude, during Picasso’s first year at the pottery, and Jacqueline Roque, who worked there, became Picasso’s wife and muse, and remained his partner for over 20 years until his death in 1973.

In all, Picasso spent 24 years at Madoura, producing 633 designs in limited editions ranging from 25 to 500. 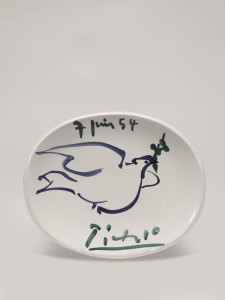 Auction houses including Bonhams and Sotheby’s regularly dedicate part of their modern art sales to Picasso ceramics. Exclusive sales dedicated to Picasso ceramics have also become increasingly popular over the past few years, adding to the perception of a growing market. Christie’s South Kensington held a sale in June 2012, entirely dedicated to the Madoura Collection of Picasso ceramics, with a 100 percent sell-through rate for the 500 lots in the sale. Later, Sotheby’s Important Ceramics by Pablo Picasso showcased the modern master’s playful side. The comprehensive group of approximately 150 works ranged in estimate from £800 upwards to £55,000.

Séverine Nackers, head of prints, Sotheby’s Europe, said, “The sale gave a great overview of the last 25 years of Picasso’s life. Every kind of ceramic he produced was represented.”

One of the UK’s finest collections of Picasso ceramics is on permanent display at the New Walk Museum and Art Gallery, in Leiceister. The Attenborough  Collection was bequeathed by Lord and Lady Attenborough who first paid a visit to the Madoura pottery in 1954. The first thing they acquired was an ashtray, for £3, but went to build up an impressive collection over the next 50 years.

The majority of the collection consists of editions and original impressions; multiple works that Picasso insisted the pottery should produce and sell inexpensively, so that everyone could own a Picasso.

In 2007, Lord and Lady Attenborough announced that their Picasso ceramics collection would be entrusted to the City of Leicester to commemorate the lives of their daughter, Jane Mary, and their granddaughter, Lucy Elizabeth, who perished together in the Asian Tsunami on December 26, 2004.

4 thoughts on “Guide to Picasso ceramics”