Alexander Clement, an Asian Art specialist at Halls auctioneers, explores the differences between two celebrated artistic movements that intertwined at the end of the 19th and beginning of the 20th Centuries – Art Nouveau and Art Deco.

There’s always been a bit of confusion between Art Nouveau and Art Deco. To the uninitiated they seem to be difficult to pin down and many struggle to tell the difference. Which is which? It’s a bit like Ant and Dec.

To help unravel these two period styles, a simple guide to telling one from the other is to think of Art Nouveau as curvy and Art Deco as spiky. Nouveau came first, historically, starting in the late 1800s as artists and designers approaching a new century were looking for a fresh style to meet the changing times.

Indeed nouveau means new and in searching for a theme it was nature that provided most of the answers. So, with Art Nouveau, we get lots of plant forms; leaves 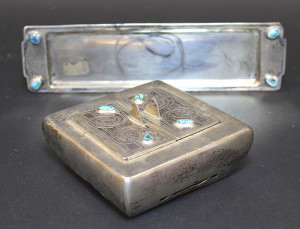 and flowers, fronds and tendrils, all weaving about the place languidly and forming the ever important ‘whiplash’ curves.

Art Deco doesn’t happen until the mid-1920s. It takes its name from a famous exhibition in Paris, 1925, called the ‘Exposition des Artes Decoratif et Industrielle’, which is a terrible mouthful. So the term ‘Art Deco’ emerged as a shortening of ‘Artes Decoratif’. It was in this exhibition that the harder-edged geometric forms came to the fore.

Again it was the designers and architects who were looking for a new style which captured the spirit of the day. The 20th century was seen as the machine age and so it was this, along with the pulsating rhythms of jazz music and the emergence of cubism in art, which all fed into the new style.

Paris was, of course, ahead of its time and the Art Nouveau style was still going strong in Britain and America in the mid-20s.  Art Deco didn’t properly replace Art Nouveau here in the UK until the early 1930s. That overlap of styles does tend to cause a bit of confusion but the two are different enough to be able to separate them at first glance. 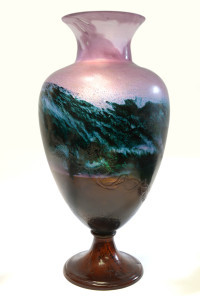 From an antiques and collectables point of view, which is best? Well there isn’t, as you might expect, an easy answer to that. There’s good, bad and indifferent in both camps but what shines through is always quality. 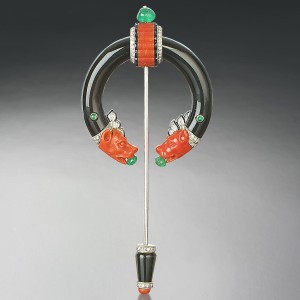 These two period styles, arguably more than any other, brought the ‘designer’ concept to a worldwide audience. Those curious people who spent hours at drawing boards or fashioning metalwares, ceramics and glass in studios from Paris to Pennsylvania began to find more than a little celebrity.  Their names became forever associated with their products; Hector Guimard, Rene Lalique, Emile Galle, Clarice Cliff, Omar Ramsden, Archibald Knox, Louis Tiffany, the list goes on.

Today, collectors are still wooed by those names and it is their designs that achieve the highest prices. Without a named designer or attribution the object has to be of top quality to get interest in the auction salerooms. So, now you know whether that vase on the mantelpiece is ‘Nouveau’ or ‘Deco’ but how can you tell who it’s by? That’s where the keen eye of an expert comes in handy!