A painting by one of Spain’s leading artists, Joaquin Sorolla y Bastida, not seen in public for more than 100 years, leads Bonhams 19th Century 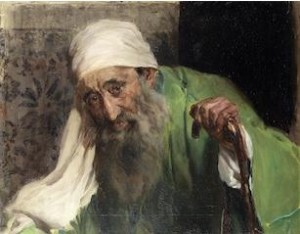 Bonhams director of 19th Century Paintings, Peter Rees, said, “The appearance at auction of Un Hebreo is a major event. It had previously been known only through black and white photographs. Sorolla is mainly associated with shimmering sea and beach scenes, but he was also a highly accomplished painter of portraits.

Sometimes these were formal commissions but more often he preferred a freer rein, as in Un Hebreo. This moving picture, on an unusual subject for Sorolla, was painted in 1898 during an exceptionally creative period for the artist in which he completed a number of key works. It shares the ease and spontaneity of many of his well-known single figure portraits.”

By 1898, Sorolla was an established artist, with his work regularly exhibited across Europe. For the opening and closing months of that year he worked at his studio in Madrid. He spent June, however, painting in the coastal town of Jávea in Alicante, completing two important landscapes, The Small Cove, Jávea and The Carob Tree, before joining his family in Valencia. He worked there for the rest of the summer, finishing Eating on the Boat – one of his major works.

In Un Hebreo, Sorolla chose a landscape composition, not a common format in the tradition of Spanish portraiture but one that he used to great effect in many of his portraits. The artist’s technique shows the influence of the Baroque painter Jusepe de Ribera with the flesh tones of the subject set against darkened backdrop to offer a sharp contrast.