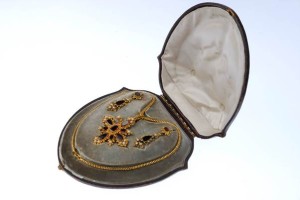 The garnet and seed pearl demi-parure features as lot 496. The necklace is designed as an oval and pear-shape garnet cluster with seed pearl accents, suspended from a snake-link chain. The set is complete with matching ear pendants in a fitted case; this lot is offered with an estimate of £2,500-3,000.

Alice Frederica Edmonstone was born on 29th April 1868, the daughter of Sir William, 4th Baronet Edmonstone and incidentally is Camilla Parker Bowles’ great grandmother. She married her high society husband George Keppel in June 1891 before meeting the Prince of 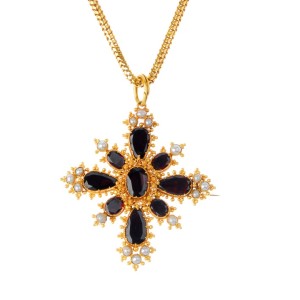 Wales, “Bertie”, seven years later. According to the social mores of the day, it was acceptable for spouses in the upper echelons of society to have affairs; however modern historians such as Victoria Glendinning have slated her as having the “sexual morals of an alley cat”. Nevertheless, Alice and George Keppel remained in a happy marriage and both died within months of one another after 56 years together.

Twenty six years his junior, Alice came to be “a fantastic help to Edward VII, more help than his wife [Queen Alexandra] could have ever have been,” according to biographer Christopher Wilson. She became his close confidante, and one of the few people who could calm the King’s often frightening mood swings until his death in 1901.

The garnet and seed pearl demi-parure was almost certainly worn by the fascinating woman around the late 19th century London social scene, and possibly in the presence of King Edward VII.