John Nicholson‘s of Fenhurst, Surrey, is offering two rare signed watercolours by H.M. Bateman, arguably the pre-eminent British humorous cartoonist of the first half of the 20th century, in its Fine Paintings auction later this month. 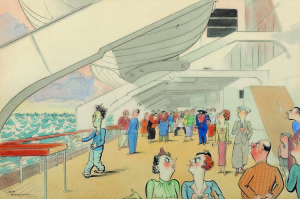 Famous for his The Man Who… series he created for The Tatler in the 1920s, Henry Mayo Bateman (1887-1970) was described by GK Chesterton as the Master of Wild Exactitude for his ability to capture offended propriety and social outrage in the comedy of manners that dominated the nation’s sense of class and society at the time.

While even limited edition prints of the cartoons from the period are rare these days, original signed watercolours from the Tatler series are a real find.

John Nicholson’s has two in their Fine Paintings auction on January 28th. 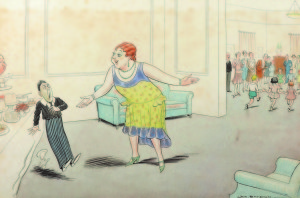 The first is a 13 x 19½in view titled The Passenger who dared to feel sea-sick on The Queen Mary, showing a green-faced unfortunate heading for the rail under the furious scrutiny of his fellow passengers and the ship’s captain.

The second is a 13¼ x 20in interior scene showing a stricken schoolboy dropping his dessert at a children’s party, entitled The Etonian who was asked to play ‘Nuts and May’.