A pair of rare 19th century Chinese vases and covers valued at in excess of £20,000 have been consigned to the next Asian Art auction at a leading Shropshire fine art auction house, taking place in May. 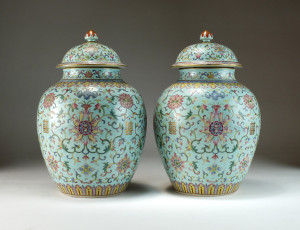 The famille rose porcelain vases and covers, which have been consigned to the May 11th auction at Halls in Shrewsbury by a Shropshire vendor, were originally part of a collection owned by Dr Wilfred Watkins-Pitchford (1868-1952), bacteriologist and pioneer of medical research in South Africa.

The vases are turquoise coloured and beautifully painted with flowers, bats and Chinese symbols meaning double joy. Halls’ Asian Art specialist Alexander Clement believes they were probably made as a wedding gift in the Daoguang period (1821-1850).

“This superb pair of vases has been owned by the Shropshire vendor for around 50 years and originally belonged to Dr Wilfred Watkins-Pitchford, a prominent physician who spent a lot of time in South Africa and, due to ill health, retired to Bridgnorth where he became active in local history,” said Mr Clement.

“To mark his retirement he was given an accolade by Jan Smuts, a prominent South African and British Commonwealth statesman, military leader and philosopher.”